Emily Ziff Griffin, author of LIGHT YEARS, on being happiest when writing

We're thrilled to have Emily Ziff Griffin stop by to tell us more about her debut novel, LIGHT YEARS. 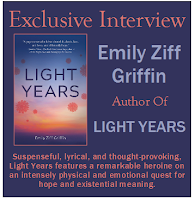 Emily, what was your inspiration for writing LIGHT YEARS?

I was inspired most directly by the two devastating losses I’ve experienced—that of my father from AIDS when I was nearly fourteen, and that of my long-time business partner and friend Philip Seymour Hoffman. I wanted to talk about grief, art, media, technology, emotion, spirituality, and my own quest for metaphysical and existential meaning, but I wanted to do it through a page-turner adventure story with a super strong girl at the center.

One of the biggest inspirations for me in writing Light Years was A Wrinkle in Time. I think Madeleine L’Engle was interested in a lot of the same themes that I am—the nature of humanity, the universe, the effect of dark forces on culture, on individuals. And I think Meg is such a strong, unique female protagonist which I believe Luisa is too. I wasn’t thinking of that book early on in writing, and then started reading it aloud to my five-year-old at bedtime. I hadn’t read it since childhood, but I found myself continuing on long after my daughter had fallen asleep because I realized the impressions the book had made on me as a child were coming out in my conception of Light Years. It was like seeing an old friend after thirty years and realizing you have more in common than you ever realized.

How long did you work on LIGHT YEARS?

It’s been roughly four years since I began through to publication. Four years!

The book literally taught me how to write. I was not a writer before I wrote this book and I worked my ass off to become one by doing it. I was also fortunate to have amazing collaborators and input from so many generous souls. I worked early on with a packaging company called In This Together Media who helped me to shape the book, and then I had extraordinary editors, both professionally and personally who taught me so much through really intelligent critiques. Overall what the process taught me is that I am happiest when I am writing and creating and that I have a lot to say!

What do you hope readers will take away from LIGHT YEARS?

This was my real, true, first book. There’s not another one in a drawer somewhere. But it was a long road to find the perfect home. There were disappointments and a lot of hard work. But as with pretty much all things in my life, I can now look at the journey and see that I wouldn’t have wanted it to go any other way because there were unexpected gifts at each turn.

That the best creative work is deeply personal, but it is most often (except in the case of memoir, and even then….) not literal. Your whole self should be on every page, but you have to find a way to transmute the literal “what happened” into narrative that connects to people in a bigger way (I’ve actually developed a workshop on this because I’m obsessed with this idea). As a mysterious virus infects the world’s population, a girl embarks on a quest to find a cure in this thrilling debut from Emily Ziff Griffin.

Luisa is ready for her life to start. Five minutes ago. And she could be on her way, as her extraordinary coding skills have landed her a finalist spot for a fellowship sponsored by Thomas Bell, the world’s most brilliant and mercurial tech entrepreneur. Being chosen means funding, mentorship, and most importantly, freedom from her overbearing mother. Maybe Lu will even figure out how to control the rare condition that plagues her: whenever her emotions run high, her physical senses kick into overload, with waves of color, sound, taste, and touch flooding her body.

But Luisa’s life is thrust into chaos as a deadly virus sweeps across the globe, killing thousands and sending her father into quarantine. When Lu receives a cryptic message from someone who might hold the key to stopping the epidemic, she knows she must do something to save her family—and the world.

Suspenseful, lyrical, and thought-provoking, Light Years features a remarkable heroine on an intensely physical and emotional quest for hope and existential meaning. 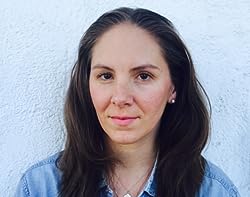 Emily Ziff Griffin lives in LA where she writes, produces, teaches, daydreams, and mothers two young kids. When she was 25, she co-founded Cooper’s Town Productions with Philip Seymour Hoffman and produced the Academy Award-winning film, ‘Capote,’ along with Hoffman’s directorial debut ‘Jack Goes Boating,’ and John Slattery’s ‘God’s Pocket.’ She's run three marathons, slowly, and holds a degree from Brown University in art-semiotics, the study of how images make meaning. She believes children are way more sophisticated than adults typically give them credit for and writes for the teenager who is ready to claim their own worldview and be grounded in their own power. ‘Light Years’ is her first novel. Find her at www.emilyziffgriffin.com

Have you had a chance to read LIGHT YEARS yet? Has a book from your childhood influenced your writing? Do you put your whole self on every page? Share your thoughts about the interview in the comments!