YA Taboos and Selling Your Book, Discussion With Author Julia Day

Julia Day joins us today to share her experience with the sales of her YA novel, The Possibility of Somewhere, featuring an interracial and interfaith couple. Surprisingly, she may have tripped over a taboo in her own home region. After reading her post, she'd love for you to share your thoughts on whether there are still taboo subjects in YA.

And be sure not to miss Julia's next release, Fade to Us, coming in February!

A Multicultural P&P by Julia Day

Years ago, my daughters and I were discussing the Keira Knightley version of Pride & Prejudice. I’d always wanted to write a modern P&P retelling, but my daughters didn’t think it would make sense in a contemporary American high school setting. They both attended urban magnet schools where racial, cultural, and economic diversity were the norm.

But the idea wouldn’t leave me alone. I convinced my girls to help me brainstorm elements that would work, and my latest book was born. Set in a rural North Carolina high school, the story is told from the POV of a poor, white, “trailer park” girl who falls in love with her academic rival—the son of wealthy Asian-Indian immigrants. (The choice of hero and heroine comes from my own experience. In the 1980s, as a poor college student, I had a crush on an Indian classmate—except I never let him know.)

My multicultural P&P has been out nearly a year now, and I’ve been surprised at how it’s selling in the South. I’m a Southern writer. The book is set in the South. Yet according to data from BookScan and WorldCat, the book sells least well there.

I was telling my brother about my surprise over the book’s performance in the South, and his response shocked me. “There’s no way your book will ever do well in the Deep South. Parents don’t want their kids reading about an interracial/interfaith couple. School librarians and teachers aren’t going to suggest it.” I told him that school librarians in Missouri put it on their summer reading list, and he said, “Missouri isn’t the South.”

Are there any YA taboos left?

One of the things that makes me most proud of YA contemporary fiction is its willingness to tackle tough issues, such as violence, disabilities, mental illness, suicide, domestic/sexual/substance abuse, and diversity of all kinds. Teens today have greater access than ever to books that reflect their lives and the world around them.

Perhaps YA’s openness is what led to my naivete about subjects that might be uncomfortable for some areas. For example, my brother still lives in the rural area where we were both raised. He found the interfaith aspect of my story to be the most problematic—even though religion is barely mentioned in the book. But the very idea that a Christian girl might be dating a Hindu boy made the book “too controversial for teens to read.” In retrospect, I’m glad that I didn’t realize religious diversity would be a problem for some. I might have been tempted to water down the story, instead of keeping it realistic for the characters and the community they lived in.

In today's political climate, it’s hard to spend any time on social media without being bombarded by how polarized people have become or how dangerous it can be to exchange differing opinions. For authors of YA fiction, I hope that we hold fast to our commitment to write the tough stories that need to be told.

Do you think there any taboos left in YA fiction? Do controversial subjects change based on the region of the country? Are they different in urban versus rural areas? Join me in the comments to share your thoughts. 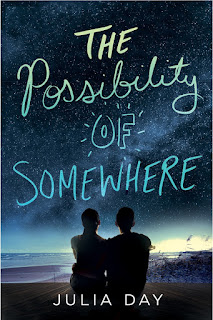 Together is somewhere they long to be.

All Eden's ever wanted was a way out. Her perfect GPA should be enough to guarantee her a free ride to college -- and an exit from her trailer-park existence for good. The last thing she needs is a rivalry with Ash, who wants a prized scholarship for his own selfish reasons. Or so she thinks. . . When Eden ends up working with Ash on a class project, she discovers that the two have more in common than either of them could have imagined. They’re both in pursuit of a dream -- one that feels within reach thanks to their new connection. But what does the future hold for two passionate souls from totally different worlds?

Julia Day was born in Tennessee, raised in Mississippi, and now calls North Carolina home. She lives mid-way between the beaches and the mountains, along with two twenty-something daughters, one old husband, and too many computers to count. When she's not writing software or stories, Julia loves to travel to faraway places, watch dance reality shows on TV, and chip away at her TBR pile. Her teen contemporary romance, THE POSSIBILITY OF SOMEWHERE, won the 2017 Booksellers’ Best Award for YA. Her February 2018 release, FADE TO US, tells the story of a teen girl, her new stepsister on the autism spectrum, and the boy they both like—in different ways. Julia also writes YA magical realism as Elizabeth Langston.