Rebecca Phillips, author of THESE THINGS I'VE DONE, on giving herself a "you can do this" pep talk

We're thrilled to have Rebecca Phillips here to tell us more about her latest novel, THESE THINGS I'VE DONE.

Rebecca, what was your inspiration for writing THESE THINGS I'VE DONE?

I actually got the idea from my author friend, Cara Bertrand. The inspiration was hers, and she passed it along to me because she thought I'd write it well. I didn't really believe I could do it at first, but the story got stuck in my head. Before long, I had an entire outline and Cara and I were brainstorming away. It was just one of those moments when everything comes together. (Thank you again, Cara!)

Without giving away too much, the hardest scene to write by far was the actual death scene. I was nervous beforehand and gave myself a "you can do this" pep talk. I'd never written a scene like that before, and it was exhausting. I felt emotionally drained afterwards and sort of just sat around, not talking, for a couple of hours until the feeling passed. I'm very proud of the scene.

How long did you work on THESE THINGS I'VE DONE?

The draft took me about four months. Revisions took several more. A lot changed between the first draft and the final one. My editor encouraged me to dig deeper and clarify and really make the story shine. Her suggestions were invaluable.

THESE THINGS I'VE DONE is my seventh novel. My agent (hi, Eric!) sent it out on submission in November 2015 and it sold to HarperTeen in January 2016. I'm one of the fortunate ones because that is considered a very short submission process. As of now, I don't have any books that aren't published. My first four are self-published, and two more of my books, FAKING PERFECT and ANY OTHER GIRL, were published by Kensington.

I'm currently working on revisions for my second book with HarperTeen, due to be released around Summer 2018. It's called THE GIRL YOU THOUGHT I WAS and it's about a girl, Morgan, who shoplifts to deal with her anger over her mom running off with another man and tearing the family apart. Despite the heavy subject matter, it's more light-hearted and romantic than THESE THINGS I'VE DONE. I'm having a lot of fun with it and can't wait for everyone to read it! A contemporary YA perfect for fans of Courtney Summers and Jessi Kirby, THESE THINGS I’VE DONE is the story of a seventeen-year-old girl who accidentally caused her best friend’s death and, a year later, is still grappling with the consequences.

Before:
Dara and Aubrey have been inseparable since they became best friends in sixth grade. However, as they begin their sophomore year of high school, cracks in their friendship begin to form, testing the bond they always thought was unbreakable.

After:
It's been fifteen months since the accident that killed Aubrey, and not a day goes by that Dara isn't racked with guilt over her role in her best friend's death. Dara thought nothing could be worse than confronting the memories of Aubrey that relentlessly haunt her, but she soon realizes it isn't half as difficult as seeing Ethan, Aubrey's brother, every day. Not just because he's a walking reminder of what she did, but because the more her feelings for him change, the more she knows she's betraying her best friend one final time. 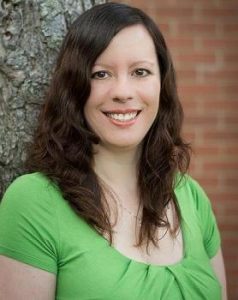 Rebecca Phillips has been writing YA since she was a YA herself. She’s the author of the JUST YOU series, OUT OF NOWHERE (2012 ABNA finalist), FAKING PERFECT (Kensington), ANY OTHER GIRL (Kensington), and THESE THINGS I’VE DONE (HarperTeen, August 1, 2017).

Rebecca lives in beautiful Nova Scotia, Canada with her husband, two children, and one spoiled rotten cat. She absolutely loves living so close to the ocean. When she’s not tapping away on her laptop, she can be found vacuuming up cat hair, spending time with her family, watching reality TV, reading all different genres of books, or strolling around the bookstore with a vanilla latte in her hand.

Have you had a chance to read THESE THINGS I'VE DONE yet? Has a friend ever passed along an idea for you to write? Do you need to recover after writing emotionally draining scenes? Share your thoughts about the interview in the comments!