Happy Monday! This week we're featuring a few really awesome giveaways including 2 copies of ORPHAN, AGENT, PRIMA, PAWN. Make sure to enter to win below, and check out all the other awesome books being released this week! 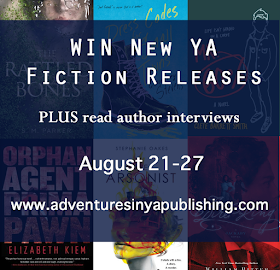 Author Question: What is your favorite thing about Orphan, Agent, Prima, Pawn?

Moscow in its Golden Era!

I am a huge Russophile, which is a tricky thing to admit these days. I mean, holy cow—they hacked our elections! They infiltrated our democratic institutions. They put Trump in the White House!!!

(They did it all without exclamation points.)

But it’s true. I am big Russian history buff, and I have a particular soft spot for those three-quarters of the 20th century during which the Russians were even more brazen about messing with the world order than they are today. Imagine—they tried to create a “Soviet Union” of social equality and economic equity.

ORPHAN, AGENT, PRIMA, PAWN takes place in Moscow, the capital of the Soviet Union, at a time when that failure was so distant it seemed inconceivable. It was also a time when Russia and the US were locked in a strange tango of competition, diplomacy and accusation (sound familiar?) but danced to the tune of nuclear Armageddon.

Telling the story of Svetlana Dukovskaya, a ballerina conscripted by the secret police in 1960 to serve as a secret agent against the West was a joy, but it was capturing her superpower—the Soviet Union in all its shabby dysfunctions, earnest optimism and improbable espionage operations that I enjoyed the most. Author Question: What is your favorite thing about Dress Codes for Small Towns?

She is a kid who is thinking, "What if I change the status quo?" rather than, "What if I leave?" I like the way she believes the world has potential. Unearthing years of buried secrets, Rilla Brae is haunted by ghostly visions tied to the tainted history of a mysterious island in this haunting novel from the author of The Girl Who Fell.

Maine-bred, independent Rilla Brae is no stranger to the deep. She knows the rhythms of hard work and harder seas. But when she experiences the sudden death of her father, the veil between the living and the dead blurs and she begins to be haunted by a girl on a nearby, uninhabited island. The girl floats a song over the waves, and it is as beautiful as it is terrifying. Familiar and distant.

Then Rilla meets Sam, a University of Southern Maine archeology student tasked with excavating the very island where the ghostly girl has appeared. Sam sifts the earth looking for the cultural remains of an island people who were forcibly evicted by the state nearly a hundred years ago. Sam tells Rilla the island has a history no locals talk about—if they know about it at all—due to the shame the events brought to the working waterfront community. All Rilla knows for sure is that the island has always been there—an eerie presence anchored in the stormy sea. Now Sam’s work and the ghostly girl’s song lure Rilla to the island’s shores.

As Rilla helps Sam to unearth the island’s many secrets, Rilla’s visions grow—until the two discover a tragedy kept silent for years. And it’s a tragedy that has everything to do with Rilla’s past.

Author Question: What is your favorite thing about The Rattled Bones?

THE RATTLED BONES has a bit of everything: mystery, historical fiction, realistic fiction, romance and, of course, a ghost! Blending these genres into one book was one of the best creative challenges I’ve had as a writer.

It sounds like a mash-up, I know. So I relied on my characters to pull it off!

Rilla, the heroine, is the captain of a lobster boat. She’s badass: fierce and strong and excels in a male-dominated world. Her heart is brave. Then there’s Sam—swoony archeologist Sam—who is good and kind and listens with an open heart. And Grams, of course. Gram is made of pure New England stock and has really solid sensibilities but her capacity for love—love of the earth, her family, community—is at the core of her proud existence.

One of my favorite characters in THE RATTLED BONES is the setting. Located on the salt-licked coast of Maine, the story is steeped in the pull of the tides, the secrets of the deep. Mystery shrouds the setting, and everything Rilla has to discover.

I hope it’s not a spoiler to reveal that there’s a ghost. ☺ She haunts Rilla—and Rilla’s entire matriarchal line—because she will not allow her story to be lost to history. I have such a deep amount of love for this ghost that reaches across time to make her voice heard.

Lastly, there are the people of Malaga Island, the small island battered by the sea, racism and greed nearly a century ago. The story of Malaga Island residents is a true one so my depictions of what happened to their community had to be precise. I hope their story comes across in the pages. I hope this book gives them voice. Because history has tried to silence them.

Lastly, I love how the two contemporary characters—Rilla and Sam—brave the mysteries of the expansive sea (and its shores) to discover more about themselves, each other, and how discrimination should never blur how deeply we are all connected in our humanity.

Witty, honest, and wholly captivating, Mr. 60% is a perfect read for fans of The Spectacular Now and Where Things Come Back.

Matt Nolan is the high school drug dealer, deadbeat, and soon-to-be dropout according to everyone at his school. His vice principal is counting down the days until Mr. 60% (aka Matt) finally flunks out and is no longer his problem. What no one knows is the only reason Matt sells drugs is to take care of his uncle Jack, who is dying of cancer.

Meet Amanda. The overly cheerful social outcast whose optimism makes Matt want to hurl. Stuck as partners during an after-school club (mandatory for Matt), it’s only a matter of time until Amanda discovers Matt’s secret. But Amanda is used to dealing with heartbreak, and she’s determined to help Matt find a way to give life 100 percent.

Author Question: What is your favorite thing about Mr. 60%?

My favorite thing about Mr. 60% is that it honors the memory of someone who meant a lot to me. In the book, Uncle Jack is a charismatic mess of a guy who is dying from cancer. This character is based closely on a family member who came to live with my family when he had a terminal case of pancreatic cancer and was given six months to live. Being with him during those final months made a profound impact on me. At the time, I was reading books about the end of life where the dying person imparted all kinds of wise life lessons and there was a clean resolution. I wanted a story that was more messy and closer to the complicated feelings that everyone felt at the time as we were dealing with this situation.

Giveaway winners will be chosen and announced when our giveaway assistant, Shelly, returns from vacation in a few weeks. Sorry for the inconvenience. Code Name Verity meets I Am the Messenger in this riveting YA novel from Morris Award finalist Stephanie Oakes, in which three points of view are woven together in a story that's part Cold War mystery, part contemporary coming-of-age, and completely unputdownable.

Molly Mavity is not a normal teenage girl. For one thing, her father is a convicted murderer, and his execution date is fast approaching. For another, Molly refuses to believe that her mother is dead, and she waits for the day when they'll be reunited . . . despite all evidence that this will never happen.

Pepper Al-Yusef is not your average teenage boy. A Kuwaiti immigrant with epilepsy, serious girl problems, and the most useless seizure dog in existence, he has to write a series of essays over the summer . . . or fail out of school.

And Ava Dreyman--the brave and beautiful East German resistance fighter whose murder at seventeen led to the destruction of the Berlin Wall--is unlike anyone you've met before.

When Molly gets a package leading her to Pepper, they're tasked with solving a decades-old mystery: find out who killed Ava, back in 1989. Using Ava's diary for clues, Molly and Pepper realize there's more to her life--and death--than meets the eye. Someone is lying to them. And someone out there is guiding them along, desperate for answers.

At turns heart-racing, hilarious, and heartbreaking, The Arsonist is an intricate tapestry--of love, loss, and the mysterious connections between us all.

The thrilling conclusion to the New York Times best-selling series the Chicago Tribune called “Sherlock Holmes crossed with Buffy the Vampire Slayer” sends the eccentric detective and his indispensible assistant into the heart of a war between magical worlds.

The fate of the world is in the hands of detective of the supernatural R. F. Jackaby and his intrepid assistant, Abigail Rook. An evil king is turning ancient tensions into modern strife, using a blend of magic and technology to push Earth and the Otherworld into a mortal competition. Jackaby and Abigail are caught in the middle as they continue to solve the daily mysteries of New Fiddleham, New England — like who’s created the rend between the worlds, how to close it, and why zombies are appearing around. At the same time, the romance between Abigail and the shape-shifting police detective Charlie Cane deepens, and Jackaby’s resistance to his feelings for 926 Augur Lane’s ghostly lady, Jenny, begins to give way. Before the four can think about their own futures, they will have to defeat an evil that wants to destroy the future altogether.

The epic conclusion to the New York Times best-selling Jackaby series features sly humor and a quirky cast of unforgettable characters as they face off against their most dangerous, bone-chilling foe ever.