We're excited to have Elizabeth Kiem join us to share more about her latest novel, ORPHAN, AGENT, PRIMA, PAWN.

Elizabeth, what was your inspiration for writing ORPHAN, AGENT, PRIMA, PAWN?

I had to write Orphan, Agent, Prima, Pawn because in the very first chapter of the very first novel I published as a fiction writer, I made a ballerina named Svetlana Dukovskaya disappear. She was a contradictory, elusive and secretive character, and her absence was a constant presence in the first two novels of my Bolshoi Saga.

The other Dukovskayas—whom readers of the saga have already met, Marina and her daughter Lana—were characters who developed as I wrote. Svetlana, on the other hand, was always there, hidden away in a psychiatric hospital for the politically provocative and problematic, but fully formed in her backstory. It was just a matter of time before I had to reveal her, for her story is the key to Bolshoi Saga.

Maya Plisteskaya was one of the top five icons of Russian ballet. When she was a child, her father was executed and her mother was sent to a labour camp as an Enemy of the People. Nonetheless, Plisteskaya grew up to become Prima Ballerina of the Bolshoi Ballet, an Artist of the People, and a ravishing beauty whose friendship with Robert Kennedy launched enough Cold War rumors to sink half of Cuba. Pliestskaya died two years ago, but her memoir, I Maya Plisetskaya, is a corking good read.

Yuri Brokhin was a virtually unknown Russian journalist, filmmaker and defector who was intimate with the Soviet underworld. His book about the Moscow mob Hustling on Gorky Street, is definitely R-rated in parts, but what else would you expect from a dude whose unsolved murder is attributed to both the Russian Brighton Beach mafia and the KGB Secret Police?

Readers intrigued by the Cold War and Russian history will also enjoy Countdown by Deborah Wiles, Red Plenty by Francis Spufford, and Symphony for the City of the Dead by M.T. Anderson.

My first self-published novel, which should be available on Amazon by August. It's called Ring Around the Luna and it stars mermaids, incubator babies and sideshow carnies. It has been lying in wait (like all good incubated things) for some time now. But when the remarkable Millicent Hodson asked to provide illustrations for my story, I knew I had to put it out into the world. As soon as the Luna files go to print I will retreat to a cabin in the woods to get some work done on a strange story I am writing about foxes, resurrection and pianos. 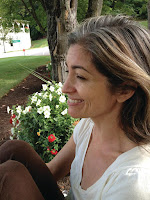 Elizabeth Kiem studied Russian language and literature at Columbia University and lived in Russia immediately after the collapse of the Soviet Union. Her nonfiction work can be read all over the world wide web. She is also the author of two other books in the Bolshoi Saga: Dancer, Daughter, Traitor, Spy and Hider, Seeker, Secret Keeper. She lives in London.

Have you had a chance to read ORPHAN, AGENT, PRIMA, PAWN yet? Do you have a character you've been waiting to reveal? Do you have any stories that are lying in wait for you? Share your thoughts about the interview in the comments!