Aden Polydoros, author of PROJECT PANDORA, on not quitting after writing the first fifty pages

We're happy to have Aden Polydoros drop by to tell us more about his debut novel, PROJECT PANDORA.

Aden, what scene was really hard for you to write and why, and is that the one of which you are most proud? Or is there another scene you particularly love?

The hardest scene to write was Chapter 23, which takes place from Hades’s POV. Until Chapter 23, he is a character who inflicts violence on other people, but is rarely the recipient and is never in a position of complete helplessness. It was uncomfortable writing him from a position of vulnerability, because it made me reevaluate him as a character. I had to ask myself how he would react to being faced with one of his greatest fears.

Even though 23 was the hardest chapter to write, it isn’t my favorite. My favorite scene is probably the first chapter. It was one of those chapters I wrote in a single sitting, and it really allowed me to explore Tyler's character. It was interesting to imagine how he would react to waking up in a stranger's home with a loaded gun. I also really love when Elizabeth and Hades meet for the first time, because there's such a contrast between the person he truly is and the way she views him.

How long did you work on PROJECT PANDORA?

I spent three months or so writing the first draft, and another couple months polishing it up. The version that was picked up by Entangled was only 65,000 words, whereas the published work stands at approximately 104,000 words. I added the other 40,000 words during the editing process.

What do you hope readers will take away from PROJECT PANDORA?

Satisfaction, mostly, and a burning desire to find out what happens next in the series. There isn't really a deep, thought-provoking message. I'll be thrilled if people just enjoy the story.

Before I wrote PROJECT PANDORA, I wrote a YA paranormal novel that is now permanently shelved, since I consider it unable to be salvaged. I also began several other stories that I never finished.

There was never really an AHA! moment. More like a gradual realization that if I kept quitting after the first fifty pages, I would never finish a novel. I gave myself a deadline and forced myself to sit down and write 1,000 words per day until I finished PROJECT PANDORA. It hasn't gotten easier since then. Some days, I still struggle to write anything. Other days, the words just fly onto the page.

I usually like to write in bed. I lay down with my laptop and keep a thermos of coffee on the nightstand next to me. I love to listen to music while I write. With Project Pandora, I listened to different bands/genres for different characters.

Don't give up and stop halfway through a story. Motivate yourself to keep writing, even if you hate what's ending up on the page. Even if you think your writing isn't good or see glaring plot holes, just ignore those things and keep going. It will get better, and by the time you're finished, you probably won't be able to distinguish between what you liked and what you hated. Having spent most of his life passing from one foster home to another, seventeen-year-old Tyler Bennett decided the only person he could trust was himself. But he hasn’t been feeling like himself lately. When he learns his entire past is a lie, and someone on the other end of a burner phone can order him to do anything, anywhere, he’s not just powerless. He’s controlled.

But when Tyler wakes during the middle of an assignment, he’s painted a target on his back. In order to unlock his buried memories and keep the Project from killing him, he’s going to need to learn to trust in a group of teens—including a beautiful girl who’s imprisoned in her own mind but he’s desperate to save. If he doesn’t uncover the truth behind the Project before it’s too late, his life is forfeit—and he may be the one to end it. 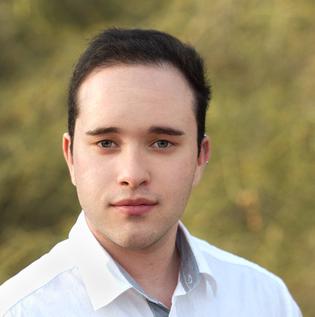 Aden Polydoros grew up in Long Grove, Illinois, the youngest of three children. Aden’s family moved to Arizona when he was in second grade. As a kid, he spent much of his time exploring the desert near his home. When he wasn’t searching for snakes and lizards, he was raiding the bookshelves of the local library.

His debut novel, PROJECT PANDORA is published by Entangled Teen. He is represented by Mallory Brown of Triada US.

Have you had a chance to read PROJECT PANDORA yet? Do you give yourself a deadline to keep getting words on the page? Are you able to ignore the things you hate to keep writing the story? Share your thoughts about the interview in the comments!