Author Candace Ganger joins us today to share not one, but two! great methods of conquering that first draft. She's got one for both you pantsers and you plotters. Be sure to check out her upcoming release, The Inevitable Collision of Birdie and Bash, below the post! (And I'm adopting her last sentence as my motto for life!)

The first draft is the actual worst. For real.

There’s no way around it. When writing something longer than a soup can label (and even then), it’s going to require revisions. Even though my YA debut, THE INEVITABLE COLLISION OF BIRDIE & BASH, is out July 25th, I’ve been writing professionally for over a decade so I know a thing or two about drafts (thus, why I loathe them so much).

In writing for others for so long (particularly of the book-length kind), I managed to figure out shortcuts to the drafting process. It’s not because I’m lazy, but I don’t enjoy the beginning of every book journey. There’s too many unknowns, and that wreaks havoc on my anxiety. I’ll spend SIX CENTURIES on a single word choice if I don’t spit it out and move on (even then, I’ll lie awake at night and obsess over my decision).

For BIRDIE & BASH (for brevity), my drafting process was slightly unique. I’d had a vague initial concept floating around for many years — two teens fall in love, not knowing of each other’s connection to a local tragedy — because that tragedy was inspired by true events that happened to my extended family. However, the rest, was a blur until one day, the characters popped into my head almost fully formed. They were rough around the edges, but for the most part, I had a concept and two MCs. I scribbled some notes for an outline (more on that below), started writing, and suddenly, I had a (really rough) draft. Within 30 days. Gross, right? Ugh, I know.

With BIRDIE & BASH, I tinkered here and there, but before the sale, I only did one major rewrite (still gross; I know). Post-sale, some things changed, but nothing painstaking. While this book was unique for me in every way, each book is different, with a new feel and flow. I’ve learned it’s best to let the book tell me what will be the best approach.

In terms of productivity, there’s two ways to go about the dreaded first draft:

I’ve done both. For BIRDIE & BASH, I edited as I went because at the time, it felt right for this book and I was right to do it that way, as it saved time later on.

To go the other route (which I did for my forthcoming book after B&B and a lot of other projects in the past), I get all my thoughts into a notebook by hand, then transfer to Post-Its for a rough outline. Writing every detail by hand has a whole other energy to it and somehow helps me clear any blockages. The caveat is scribbling too much information (which I’ve also done!) and don’t know where to go from any of it. That’s fun (not).

Most books get at least half of a spiral notebook’s worth of thoughts before they get the Post-It treatment and a Word document. At most, I’d say this pre-phase takes about a week. This is because I’m detailed to a fault, and usually fall into an information spiral on the internet where I can’t make a decision and instead, adopt another cat (because that’s my anxiety calming thing).

Regardless of which method you think may work for your project, to get a fast draft done, you only have to commit to one scene at a time. Or one chapter. Or one page, if it all feels too big. But you have to commit, even when you’re spewing garbage (which I do, often!). My word count everyday tends to ride somewhere between 500-1,000/weekday, but on weekends, I do more if I’m able. I also have two children and a staff writing job. And it’s summer. So, basically, I’ve had to cut myself some major slack for getting next-to-nothing accomplished (except petting my fluffy cat) (and that’s OK).

Once you’ve committed to what you’ll do each day, and chosen your preferred method, you’re ready to go. Here’s the shortcuts to getting a fast draft done with each, whether you feel like it or not. Because usually for me, it’s not.

1) Method #1: Get everything on the paper and worry about it later

There you have it! Those are my two go-to methods for fast-drafting. There’s pros and cons to both, so do what works for you. In over 10 years, each has helped me meet deadlines with less stress than other drafting techniques I’ve tried. However, you can’t revise a story that hasn’t been written yet, so most of the time, I go for the first method just to get the basics down as fast as possible (while editing things I think of in the days after, as I think of them). Good luck and may all the fluffy cats be with you! 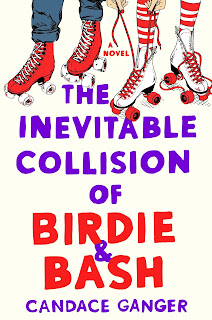 Sebastian Alvaréz is just trying to hold the pieces together: to not flunk out, to keep his sort-of-best friend Wild Kyle from doing something really bad, and to see his beloved Ma through chemo. But when he meets Birdie Paxton, a near-Valedictorian who doesn’t realize she’s smoking hot in her science pun T-shirt, at a party, an undeniable attraction sparks. And suddenly he’s not worried about anything. But before they are able to exchange numbers, they are pulled apart. A horrifying tragedy soon links Birdie and Bash together—but neither knows it. When they finally reconnect, and are starting to fall—hard—the events of the tragedy unfold, changing both their lives in ways they can never undo. Told in alternating perspectives, The Inevitable Collision of Birdie & Bash by Candace Ganger is a beautiful, complex, and ultimately hopeful teen novel that will move you to the very last page.

CANDACE GANGER is a contributing writer for HelloGiggles and obsessive marathoner. Aside from having past lives as a singer, nanotechnology website editor, and world’s worst vacuum sales rep, she’s also ghostwritten hundreds of projects for companies, best-selling fiction and award-winning nonfiction authors alike. She lives in Ohio with her family.