Paula Stokes, author of THIS IS HOW IT HAPPENED, on how it was almost a completely different book

We are thrilled to be joined by Paula Stokes, who pieces together the details for us in her latest novel, THIS IS HOW IT HAPPENED. 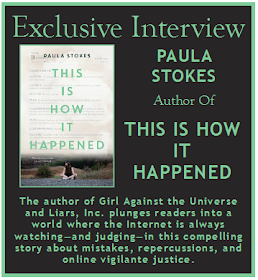 Paula, what was your inspiration for writing THIS IS HOW IT HAPPENED?

It's hard to chase down the exact moment the pieces for TIHIH came together in my head. I was writing a book under contract about a girl who goes to Denmark to visit her estranged father. The plot and character development for that book wasn't coming together, and after penning 45,000 words I hated the story and asked my editor if I could write something else instead. Because she is awesome, she said yes. I wanted to honor the contract as much as possible, so initially I tried to hold onto as many pieces of that story as I could. I used a similar main character with a similar family dynamic who had fled to Denmark for a different reason. My editor wanted someplace closer than Denmark for this particular book, so I switched Genevieve's escape to Southern Utah--specifically the area around Zion National Park--one of my favorite places in the whole world. The plot hinges around a car accident that happens prior to the beginning of the book where a talented musician dies at age eighteen. This was definitely inspired by the death of one of my cousins in his early 20s--the first "young death" that really affected me on a personal level. And then the internet shaming aspect was inspired by a lot of different "online public floggings" I witnessed, primarily on Twitter. I'm extremely sensitive and I often feel empathy toward people the general public might describe as "bad people" or "that guy deserved it." I don't really think anyone deserves to be bullied or harassed to the point of crushing despair, even if they are guilty of a crime, and I definitely don't think a person's innocent friends/relatives/coworkers deserve to be injured by the sometimes widespread fallout that goes along with internet vigilante justice.


How long did you work on THIS IS HOW IT HAPPENED?

As mentioned above, THIS IS HOW IT HAPPENED was a last-minute substitute book idea for a book under contract I crashed and burned on. I submitted the idea for TIHIH (then called SHATTERED HEARTS) as a one-page pitch in November of 2015, submitted a six-page outline in December of 2015, and started writing immediately before editorial approval of the outline due to my deadline, which was extended from Dec 31, 2015 to March 31, 2016. I wrote about 50 pages in December, and then after approval focused on the book in February of 2016, after finishing my draft of FEROCIOUS for Tor Teen in January. I turned in the first draft of TIHIH in mid-March (then called HOW TO TELL THE TRUTH), the second draft in April, and the third draft in early June. I spent about eight weeks on the first draft and another four to six weeks total revising the book around promotional commitments for GIRL AGAINST THE UNIVERSE. It was by far the quickest I've ever written and/or revised a novel. (Usually I like to let an idea simmer in my brain for at least six months before I even think about tackling an outline.) I am extremely grateful to my editor who also had to prioritize the book in order for us to meet revised publication deadlines, and to my agent who did a quick read to assure me that despite the fast drafting and revising that the book was ready for publication.

This book taught me that I can produce a quality novel at an extremely fast pace when I need to. It also taught me that writing and revising at that extremely fast pace is no way to live. I would say I was miserable writing this book, but I was honestly too tired to even focus on being sad. I wrote this during the presidential primary season and I remember having almost no awareness of what was happening aside from my sister sending me occasional emails about stuff she saw on late-night TV. I was truly in a black hole of "There is nothing but work, all day, every day." You're probably thinking "Why didn't you just delay the book, Paula?" It's a fair question and I definitely second-guessed my decision to push to meet the deadline for 2017 publication a few times, and I made it clear to both my agent and editor that I was okay with delaying the book if they thought it wasn't ready for publication. But for financial reasons I won't go into in detail, I felt like I *desperately needed* to release this book on time. It truly felt like I was staving off dire consequences by working my ass off and refusing to quit. So even though I hope I never have to write on that schedule again, I'm proud of myself for surviving, and I'm proud of the end result. THIS IS HOW IT HAPPENED feels a little bit like it was forged in fire, and for that reason it will always be special to me :)

What do you hope readers will take away from THIS IS HOW IT HAPPENED?

I hope readers walk away from the book thinking more deeply about the way they post and interact online. I think almost all of us have rattled off a quick comment or tweet based on an emotional response to a single article or post without much thought and without all the facts. But how do all of those single comments compound to affect a target? And does it change things if that target was already struggling with depression or some other mental illness before we started piling on? Are there some things that are out of line even if the target is guilty? Some people don't care if they hurt someone who they have judged to be a "bad person" or "that guy deserves it." That's their right--I'm not telling anyone how to feel or how to behave. But I think the casual dehumanization of the internet also makes it easy for people to just blurt out their thoughts without even really acknowledging the people--both the target and totally innocent bystanders--who might be affected. I wrote this book to humanize the targets of online shaming and draw awareness to the innocent bystanders who can also be inadvertently harmed by internet vigilante justice. Nothing in the book is meant to excuse anyone's crimes or bad choices--almost everyone in the story has made a bad choice that has harmed people at one point in their lives and all of these judgment errors are called out and acknowledged throughout the book. I'm just not sure millions of strangers without all the facts are the right forces to be doing the judging and sentencing. I firmly believe there are many cases where people might not post the things they post if they took a few seconds to think about "Do I have all the facts? If so, who might this post hurt? And to what degree? And am I okay with that?"

Yay! As always, lots of stuff :) After THIS IS HOW IT HAPPENED, I'll be prepping for the release of FEROCIOUS, the sequel to VICARIOUS which is out on August 15th. Then I've got my first self-published book releasing later this fall in late October. It's called THE KEY TO EVERYTHING and it's a new adult romance set in various locations around Thailand. I have a HarperTeen mystery releasing in summer of 2018 that I'm doing final revisions to, and I also have two more projects in the works--one is a speculative adventure set in Iceland that's currently being considered for publication and the other is a feelsy contemporary in the vein of GIRL AGAINST THE UNIVERSE for which I've just completed the first draft. Oh and I'm also working on incorporating more than just writing into my life, so I've started a new part-time nursing job, started working as a volunteer with Portland's homeless population, and I've also joined a local political group so I can be stay aware and be more active. Thanks to Adventures in YA Publishing for hosting me and thanks to everyone for reading :) When Genevieve Grace wakes up from a coma, she can’t remember the car crash that injured her and killed her boyfriend Dallas, a YouTube star who had just released his first album. Genevieve knows she was there, and that there was another driver, a man named Brad Freeman, who everyone assumes is guilty. But as she slowly pieces together the night of the accident, Genevieve is hit with a sickening sense of dread—that maybe she had something to do with what happened.

As the internet rages against Brad Freeman, condemning him in a brutal trial by social media, Genevieve escapes to her father’s house, where she can hide from reporters and spend the summer volunteering in beautiful Zion National Park. But she quickly realizes that she can’t run away from the accident, or the terrible aftermath of it all.

Incredibly thought-provoking and beautifully told, Paula Stokes’s story will compel readers to examine the consequences of making mistakes in a world where the internet is always watching…and judging. 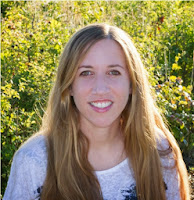 Paula Stokes is the author of several novels, most recently Vicarious and Girl Against the Universe. Her writing has been translated into eleven foreign languages. Paula loves kayaking, hiking, reading, and seeking out new adventures in faraway lands. She also loves interacting with readers. Find her online at authorpaulastokes.com or on twitter as @pstokesbooks.

Have you had a chance to read THIS IS HOW IT HAPPENED yet? Have you been writing and realized the story wasn't the one you were meant to tell? Do you fall into a black hole of writing? Share your thoughts about the interview in the comments!