We are feeling wild ourselves over this interview with J.C. Geiger, as he shares more about his debut novel, WILDMAN.

J.C., what is your favorite thing about WILDMAN? 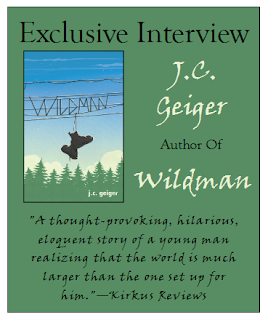 My favorite thing about WILDMAN is its honesty. It’s unflinching. The first draft was written at a point in my life when I had given up trying to publish a book, and just tried to write the most authentic thing I could. Even if only one person ever read it. Because I thought it would never be published, I didn’t have to worry about what people would think, or how the book would be received. I wrote it with the intimacy of a letter.

I think that honesty still resonates. I didn’t hold back from what a character would think as long as it felt real. In the past, I would’ve been afraid for a character to act a certain way because of how it might reflect on me as a person, or maybe I would’ve cut a scene because it wasn’t flashy enough, or didn’t move the plot in a certain direction. In WILDMAN, I paid attention to what struck me the most. I felt like my job was to push myself into vulnerable places, lean in, and tell it honestly.

So after years of drafts and revisions I can read parts of WILDMAN and still feel surprised. Some of the lines still make me laugh and other times I think: "Man. I can't believe this writer actually did that."


What was your inspiration for writing WILDMAN?

I was on my way home from a writing retreat in Washington state, about 400 miles from home when my car broke down and stranded me in the middle of nowhere. The car is the same ‘93 Buick Century the main character, Lance, drives in the book, and it was the only car my family had. This was a low point for me. I’d just had my latest novel rejected and was basically broke. The breakdown of my old car seemed like a sure sign from the universe that I should just give up writing and try something else.

Instead, I just gave up trying to sell a book. And I stopped trying to come up with some contrived hook or clever twist that would translate into a story I could sell. Instead, I decided to write the best, most honest story I could. And the car breakdown the universe handed me seemed like a better plot than anything I could possibly come up with. I started outlining the story while I was stranded in a motel, and that story became WILDMAN.

What do you hope readers will take away from WILDMAN?

I hope readers leave this book understanding the world is much broader than the path others have planned for them, and they are more complex than the identity they’ve been handed by peers, parents, teachers, coaches, and anyone else in their life. It’s easy to be trapped in an identity – particularly in your hometown and by the people you’ve grown up with. I’d love a reader to take away some of the courage they need to break out of the box they’ve been put in. Maybe starting with an epic road trip. But in a slightly newer car.

The road to publication was about as bumpy and perilous as the breakdown of the Buick. I’ve been seriously writing as long as I can remember. I actually wrote a screenplay for the science fiction TV show The Outer Limits when I was seventeen and flew out to LA for a meeting with MGM. While I was out there, a wise career writer told me: “Don’t come to LA or you’ll write like everyone who lives here. You’re young. Go out. Travel. Have adventures. Get laid. LA isn’t going anywhere.” That sounded pretty great. So I did some of that.

But when I decided to write like me instead of like everybody else, it took me 15 years and four novels worth of learning and publication failure to come up with WILDMAN. This is the book where I finally found my voice, and it was worth every late night, early morning, tearful phone call, rejection slip, and untimely breakdown. I wouldn’t have it any other way.

Good question! Coffee and dark chocolate are staples. I like to work in small, dim spaces. The more like a cave, the better. I like it cold, so my fingers have an incentive to keep moving. I can’t really write with people around, since I do a lot of drumming on the desk, laughing out loud, talking to my characters, cursing, and weeping openly. I don’t have the courage to do that in a coffee shop. Yet.

And there is always music involved. I pick one album and listen to it hundreds and hundreds of times in a row. I should probably credit the bands as co-authors because I end up weaving their themes and emotions into the text. The Head and the Heart and Blind Pilot were with me for WILDMAN, and I couldn’t have written this book without them. Or the coffee. Or the chocolate. Lance Hendricks is homeward bound, four hundred highway miles from the best night of his life. There’s an epic graduation party brewing, his girlfriend will be there, and they’ve got a private bedroom with their names on it. When his ’93 Buick breaks down in the middle of nowhere, Lance is sure he’ll be back on the road in no time. After all, he’s the high school valedictorian. First chair trumpet player. Scholarship winner. Nothing can stop Lance Hendricks.

But afternoon turns to night, and Lance ends up stranded at the Trainsong Motel. The place feels ominous, even before there’s a terrible car wreck outside his room. When Lance rushes out to help, the townies take notice. They call him Wildman, and an intriguing local girl asks him to join in their nighttime adventures.

He begins to live up to his new name. As one day blurs into the next, Lance finds himself in a bar fight, jumping a train, avoiding the police. Drifting farther from home and closer to a girl who makes him feel a way he’s never felt before—like himself.

This debut novel by a remarkable new talent explores the relationship between identity and place, the power of being seen, and the speed at which a well-planned life can change forever.

J.C. GEIGER has eaten the beating heart of a snake, been deported from a full-moon party, and spent a short time locked in a Bolivian prison. He also writes fiction. His short works have appeared in the pages of Murky Depths and Horror Garage, and on stage at The Second City in Chicago. J.C. now writes, teaches, directs, and performs in the Pacific Northwest, where he can often be spotted behind the wheel of a 1993 Buick Century. It still runs like a dream. Visit him online at www.jcgeiger.com and on Twitter @jcgeiger.

Have you had a chance to read WILDMAN yet? Do you remember to write honestly when you feel discouraged? What was the best advice you ever got in this industry? Did you accept it when it was first presented to you? Share your thoughts about the interview in the comments!