REIGN OF SERPENTS is book 3 in the Blood of Gods and Royals series, and we're delighted to have Eleanor Herman swing by to chat about it. 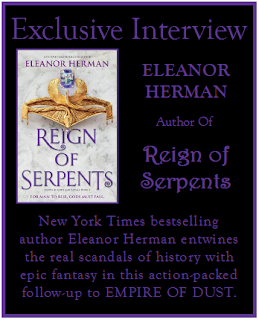 Eleanor, what was your inspiration for writing REIGN OF SERPENTS?

REIGN OF SERPENTS is the third book in a quadrilogy, as I call it, a four-book series based on Alexander the Great at sixteen. It mixes history with magic, and I love both! As an author of many non-fiction historical books, I understand how people thought in the ages before science. Magic was very real to them, and it still is to many people in traditional communities around the world.

I loved researching and writing about the ancient oracle of Delphi. I’ve been to Delphi, and if there’s one place on earth where the ancient magic of the gods still exists, it’s there! I also loved writing about Princess Cynane’s crazy husband, King Amyntas, and based him on a mixture of Nero and Caligula. The challenging chapters were those that dealt with magic: the powerful spirit that takes over Alexander, Katerina going into sea creatures, Jacob causing an earthquake with his anger. How do I make the magic believable? More than just believable. How do I make the readers feel the magic gliding through their own veins with its lilting ancient song of power?


How long did you work on REIGN OF SERPENTS?

I wrote it over the course of a year because I was working on a non-fiction book, THE ROYAL ART OF POISON, at the same time. So it really took me about six months of daily work for each one.

What do you hope readers will take away from REIGN OF SERPENTS?

I want my readers to really feel as if they have lived in ancient Greece, that they could walk right into it expecting what to wear, eat, and how to light an oil lamp! I want them to have a great adventure and learn about love, hate, friendship, revenge, and trying to do the right thing when you really have no idea what that is. In ancient Greece.

I have the shortest commute in the Washington, DC area where poor people on average drive an hour each way. Mine is five seconds from my bed and I can make it in my pajamas! So I love that. I’m usually at my desk by 8:30 a.m., write till lunch, go to the gym and do errands, come back, and write some more. I love the sound of silence or cats purring on baskets on my desk, though sometimes I listen to Renaissance music. I’ve got misophonia—something in my brain is wired so that noise can really make me crazy, so I have a hard time working anywhere public, even a library, because people have the terrible habit of talking there.

Read like crazy. Then write like crazy. Write short stories. Write novels. Take writing courses. Join writer’s workshops. Write for blogs or your local newspaper. Non-fiction bylines help position you as a writer and helps you with clarity of thought, not to mention grammar and punctuation.

This is a really hard business to get into, and it ain’t that easy once you’re here. You have to have a skin two feet thick. You have to want this so much it is your main reason for living. You have to want it so much you will put up with any amount of rejection and humiliation just for a chance to make it happen. You have to go into it knowing at times there will be tears, frustration, and depression. And if that doesn’t scare you off, maybe you will be a writer.

I am currently starting Dawn of Legends, Book 4 of the Blood of Gods and Royals series, set to come out in June 2018. In REIGN OF SERPENTS, the ancient power of Snake Blood threatens the known world. While Prince Alexander struggles with a very deadly inner demon, his betrothed, Zofia, is on her way to him, to unite their kingdoms…even as she begins to realize where her true allegiance lies.

The fierce Cynane meets her match-not in her future husband, the deranged king of Illyria, but in her great-great-grandfather, Talus, possessor of Smoke Blood, who will teach her the true meaning of betrayal.

And marooned together on an island in the Mediterranean, romantic tension blooms between Katerina and Hephaestion as they learn of lost civilizations and discover a device that could help them do the impossible: kill the last living god.

Eleanor Herman is a New York Times bestselling author of several highly acclaimed works of nonfiction, including Sex with Kings, Sex with the Queen, Mistress of the Vatican, and King Peggy. Eleanor is also a frequent commentator in the media about royal scandals and has hosted episodes for The History Channel’s show Lost Worlds. Born in Baltimore, Maryland, Eleanor graduated with a degree in journalism from Towson University, studied languages in Europe, and worked for NATO’s Nations & Partners for Peace magazine. Fascinated since childhood by the ancient world, she has visited most of the well-known sacred sites, palaces, and arenas still in existence, from Homer's Troy to the great temples of the oracles. She lives in McLean, Virginia, with her husband and four very dignified cats. Legacy of Kings is her first novel.

Have you had a chance to read REIGN OF SERPENTS yet? Do you work to make your readers feel as if they are in another time and place? Do you read and write like crazy? Share your thoughts about the interview in the comments!