We are thrilled for the opportunity to sit down with Ali Novak for insight into her latest novel in The Heartbreak Chronicles, PAPER HEARTS. 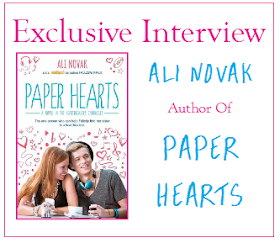 Ali, what scene was really hard for you to write and why, and is that the one of which you are most proud?

For some reason, I really struggled to write the scene when Felicity gets to San Francisco and realizes Rose isn’t there. I knew exactly how I wanted the scene to play out, but I couldn’t write it. My sister Peyton is also a writer, and she ended up writing a rough outline of the scene to help me move past my block. I wouldn’t say I was proud when I finished it, but I was definitely happy that I was done.
How long did you work on PAPER HEARTS?

Paper Hearts took forever! I worked on it for almost two years. I think the reason I struggled was because Paper Hearts was the first book I wrote that wasn't serialized. I’m used to writing on Wattpad, where I write and post one chapter at the time. The feedback I get from my readers influences where I go with the story, so to not have that support system was paralyzing.

I am working on the third book in The Heartbreak Chronicles, which is called Heartstrings. It’s about Xander, and one of the main characters is someone we briefly met in Paper Hearts. Felicity has her entire future planned. Ever since her older sister ran away, she's had the full weight of her mother's expectations on her shoulders. So she works hard to get straight As and save for college.

Except sometimes the best things in life are unplanned--like when Felicity meets a handsome, masked stranger while she is volunteering at a charity masquerade ball. She never thought he'd flirt with her. And she certainly never thought he'd turn out to be a member of the world-famous Heartbreakers band, Alec.

Then Felicity uncovers a shocking family secret. Suddenly, she, Alec, and her two best friends are off on a road trip to find Felicity's missing sister. And she's about to discover that unexpected turns have a peculiar way of landing her right where she needs to be...

Ali Novak is a Wisconsin native and a graduate of the University of Wisconsin-Madison’s creative writing program. She started writing her debut novel My Life with the Walter Boys when she was only fifteen. Since then, her work has received more than 130 million hits online.

When she isn’t writing, Ali enjoys Netflix marathons, traveling with her husband Jared, and reading any type of fantasy novel she can get her hands on. You can follow her on Wattpad, Facebook, Twitter, and Instagram @fallzswimer.

Have you had a chance to read PAPER HEARTS yet? Have you asked a fellow writer for assistance when you hit a block? What was your solution? What do you do when you need extra support and feedback for your project? Share your thoughts about the interview in the comments!