Sarah Tolcser, author of SONG OF THE CURRENT, on the only way out being through

We are pleased to have author Sarah Tolcser here today to chat about her debut novel, SONG OF THE CURRENT. 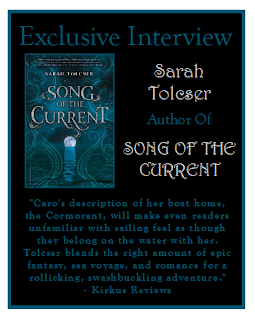 Sarah, how long did you work on SONG OF THE CURRENT?

I started drafting the book in spring 2013 and finished in about six months. By April I had signed with my agent, and after that we revised the book for another year before going on submission. During revisions, I cut 25,000 words from the book. It was four years total from first draft to publication.

For me it wasn’t the key to writing a novel that I needed. It was the key to revising a novel. Before SONG OF THE CURRENT, I’d written a bunch of books with huge issues, and I’d always get to a point where I realized the problems with the book were so big it made more sense to shelve it and move onto the next thing. But when you’re working with an agent or editor, you can’t do that anymore. You have deadlines and you have to learn to plow through the problems. You don’t have a choice. The only way out is through. In the last two years I’ve learned so much about rewriting a book, I’m pretty sure I like it better than drafting now.

I got an agent pretty quickly with the first book I queried, but it wasn’t the first book I’d written. It was probably the fifth or sixth. I don’t think I got lucky. What I do think is I waited to query until I knew I had a manuscript that was really, truly ready. So what I would tell other writers is if you finish a book and you feel like it’s not the one, it’s okay to put it away and just write another. Every one of those books matters. Just because you don’t query a book doesn’t mean it was a waste of time. Each book gets you closer to the book that IS the one. Caroline Oresteia is destined for the river. For generations, her family has been called by the river god, who has guided their wherries on countless voyages throughout the Riverlands. At seventeen, Caro has spent years listening to the water, ready to meet her fate. But the river god hasn’t spoken her name yet—and if he hasn’t by now, there’s a chance he never will.

Caro decides to take her future into her own hands when her father is arrested for refusing to transport a mysterious crate. By agreeing to deliver it in exchange for his release, Caro finds herself caught in a web of politics and lies, with dangerous pirates after the cargo—an arrogant courier with a secret—and without the river god to help her. With so much at stake, Caro must choose between the life she always wanted and the one she never could have imagined for herself.

From debut author Sarah Tolcser comes an immersive and romantic fantasy set along the waterways of a magical world with a headstrong heroine determined to make her mark.

Sarah Tolcser lives in New Orleans, where she wrangles iPads and rogue computers at her day job. A graduate of St. Lawrence University, she double majored in writing and philosophy. She enjoys video games, NBA basketball, and books about girls who blow stuff up. She is married, with three cats.

The C in Tolcser is silent.

Have you had a chance to read SONG OF THE CURRENT yet? Do you hate revising books? What has helped you to continue pushing through and making those necessary changes? Share your thoughts about the interview in the comments!