Sandhya Menon, author of WHEN DIMPLE MET RISHI, on stories waiting for you

We are delighted to have Sandhya Menon here to chat about her debut novel, WHEN DIMPLE MET RISHI. 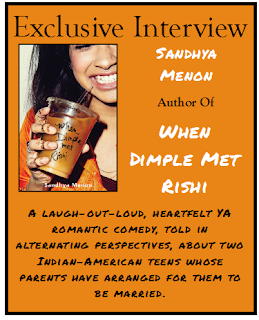 Sandhya, how long did you work on WHEN DIMPLE MET RISHI?

It took me about three months to write, and the edits took another couple of months. I was really sad when it was over; I loved spending time with Dimple, Rishi, and their friends and family!

This was the first YA rom-com I've ever attempted. It taught me that stretching myself as a writer is excellent for the craft. And it taught me to say "yes" even when I'm scared!

If you need to take a break from writing, take it without apology. Sometimes we need to step away before we're able to come back to our art, stronger than before. Your stories will wait for you. A laugh-out-loud, heartfelt YA romantic comedy, told in alternating perspectives, about two Indian-American teens whose parents have arranged for them to be married.

Dimple Shah has it all figured out. With graduation behind her, she’s more than ready for a break from her family, from Mamma’s inexplicable obsession with her finding the “Ideal Indian Husband.” Ugh. Dimple knows they must respect her principles on some level, though. If they truly believed she needed a husband right now, they wouldn’t have paid for her to attend a summer program for aspiring web developers…right?

Rishi Patel is a hopeless romantic. So when his parents tell him that his future wife will be attending the same summer program as him—wherein he’ll have to woo her—he’s totally on board. Because as silly as it sounds to most people in his life, Rishi wants to be arranged, believes in the power of tradition, stability, and being a part of something much bigger than himself.

The Shahs and Patels didn’t mean to start turning the wheels on this “suggested arrangement” so early in their children’s lives, but when they noticed them both gravitate toward the same summer program, they figured, Why not?

Dimple and Rishi may think they have each other figured out. But when opposites clash, love works hard to prove itself in the most unexpected ways.

Sandhya Menon is the author of When Dimple Met Rishi. She was born and raised in India on a steady diet of Bollywood movies and street food, and blames this upbringing for her obsession with happily-ever-afters, bad dance moves, and pani puri. Now she lives in Colorado, where she’s on a mission to (gently) coerce her husband and children watch all 3,220 Bollywood movies she claims as her favorite. Visit her online at SandhyaMenon.com.

Have you had a chance to read WHEN DIMPLE MET RISHI yet? Do you say "yes" even when you're scared? Have you needed to step away from your writing? Were you nervous you would not get back to it or wouldn't be able to start again? Share your thoughts about the interview in the comments!