We are honored to have Keely Hutton here to share more about her debut novel, SOLDIER BOY, which tells the story of Ricky Richard Anywar. In addition, we are privileged to have Ricky here to talk about working with Keely to tell his story. 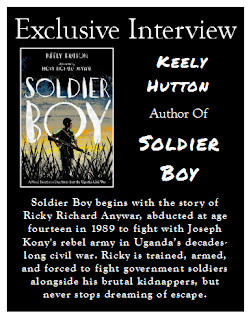 Keely, what was your inspiration for writing SOLDIER BOY?

Long answer: In 2012, my cousin emailed me about Ricky, who he’d met while working with non-profit organizations in Africa. Ricky was looking for a writer to tell the story of his time as a child soldier. Five minutes into our first Skype conversation, I knew I wanted to help Ricky give a voice to the thousands of children whose voices were stolen by Kony and the LRA. Ricky and I have been working together on SOLDIER BOY ever since.

There were many scenes in SOLDIER BOY that were emotionally difficult to write, but one that hit me the hardest was the scene when Ricky and his brother are forced to watch their parents and sisters die at the hands of the LRA. As a writer, I try to emotionally connect with the characters, in hopes that my emotional connection will extend through the characters to my readers. I sobbed writing the last moments between Ricky and Patrick’s mother and her sons. As a mother of two boys, it was heartbreaking to imagine her fear and pain in that moment, knowing not only what awaited her, but the terrible, uncertain fate her sons would be forced to face without her.

NEVER FALL DOWN by Patricia McCormick

A LONG WALK TO WATER by Linda Sue Park

BEASTS OF NO NATION by Uzodinma Iweala

How long did you work on SOLDIER BOY?

I learned a great deal about the writing and revision process working on SOLDIER BOY and I discovered I am a plotter, not a pantser. I now create a chapter breakdown and write the dreaded synopsis before starting the first draft of a manuscript. Working with Ricky and writing this book also taught me how to better see the world beyond the limited scope of my life experiences and to always seek opportunities to expand that view and understanding for myself, my children, and I hope, my readers.

What do you hope readers will take away from SOLDIER BOY?

SOLDIER BOY reveals the heartbreaking horrors thousands of Ugandan children faced during the decades-long civil war that gripped their country, but at its core, it’s about the unrelenting strength of the human spirit to find hope in the darkest corners of hell, to escape captivity despite insurmountable odds, and to hold onto humanity when all else is lost. I hope readers are left with a new perspective on what they are capable of when faced with hardships and a new understanding of how sharing your story heals not only you, but those who hear it.

I started writing picture books in 1999. I wrote twelve. Some I queried. Some I didn’t. In 2008, I tried my hand at writing YA. I wrote and queried one full YA manuscript and was working on a second when Ricky contacted me. I received over 200 rejections from agents for SOLDIER BOY, which back then was titled FINDING OBENO, before finding my agent, who sold the book to Wesley Adams at FSG.

Yes. I had the privilege of attending an Editing for Writers workshop led by editor Stephen Roxburgh. He taught me the importance of finding the “core” of your story. Identifying the story’s core provided an anchor, to which every scene I wrote could be tethered. With SOLDIER BOY, I discovered the story’s core in an email from Ricky listing the sequence of events regarding his abduction and captivity. One bullet point simply stated: We picked our code word for home. Home became the core around which I wrote the story.

I write 5 days a week from home. I have a writing room I’ve decorated with all things Disney, including a huge felt cut out of Dory’s manta JUST KEEP SWIMMING above my desk. I listen to instrumental music. If it has lyrics, I sing along and my productivity takes a dive. Usually I put on the film scores channel on Pandora or listen to YouTube channels of Walt Disney World parks music loops.

Be professional. Writing is personal, but publishing is a business. If you hope to become a professional in this business, conduct yourself like one. Be gracious. Be polite. Be considerate. Be patient. And…

Be willing. If an agent, editor, or CP takes the time to give you feedback, consider it. Try it. It may work. It may not. But don’t dismiss feedback and the opportunity to grow as a writer because of hurt feelings.

Be persistent. When faced with doubts, obstacles, and rejections, JUST KEEP SWIMMING!

I am working on another story about children and war that I am very excited about and hope to announce in the next few months, so please stay tuned. 😊

How did the idea to turn your experiences into a novel come about?

I drew my strength and inspiration to turn my experiences into a novel to restore hope, build confidence, healing, and the dignity of people facing injustices around the world. I also wanted to inspire people to realize that there is no situation which is permanent. No matter how challenging the situation seems to be, we can work to change situations in our communities and around the world. We should commit ourselves to do it. I wanted the world to realize that we cannot change our past, we cannot change the fact that people will always act in certain ways toward us, but we can change the attitudes toward certain situations. With this book, I hope to see new generations of peacemakers emerging from around the world.

How did you and Keely work together to tell your story?

Keely’s cousin John introduced us over email. We started Skyping and were able to meet in 2012 in Canton, New York, where we discussed the book idea and I told her my life story as a child soldier in the LRA and how I founded Friends of Orphans. She also accompanied me to a speaking engagement where I spoke to the communities of Clarkson University about the work I do and what inspired me to do it. We continued to communicate regularly over the last five years through emails, Skype and Facebook.

What was it like watching your story move from your past to the page?

It is very exciting to see my story move from my past to the pages in the book. I feel very blessed that I have lived and got the opportunity to tell my story to the world. I know there are many child soldiers who perished and did not get the opportunity to live to tell their stories. This book represents the voices of the voiceless, and I hope that the book will inspire many and be an eye opener to the world on the issues of child soldiers.

Do you have plans to write more novels together?

I hope Keely and I will have the opportunity to work together on another novel. I have so far mentioned it already to her in one of the many discussions and conversations we have been having.

What can readers do to help with situation in Uganda?

A portion of Keely’s proceeds from the book will be donated to Friends of Orphans, so by purchasing SOLDIER BOY, readers are already helping with the situation in Uganda. We are thankful to readers for their support. The war lasted over 23 years, and the damage and trauma caused by the war is still being felt throughout northern Uganda, therefore we need more support. If readers want to help more, we need financial support to help run our rehabilitation, reintegration, and empowerment programs. We also need volunteers to come and work with FRO in Uganda, as well as volunteers who can work in their communities by to create awareness about our work, promote advocacy and networking, and organize fundraisers to further support Friends of Orphans projects.

Thank you so much for sharing your story with us, Ricky. You are a true inspiration. Click here to find out more about Friends of Orphans. Soldier Boy begins with the story of Ricky Richard Anywar, abducted at age fourteen in 1989 to fight with Joseph Kony's rebel army in Uganda’s decades-long civil war. Ricky is trained, armed, and forced to fight government soldiers alongside his brutal kidnappers, but never stops dreaming of escape.

The story continues twenty years later, with a fictionalized character named Samuel, representative of the thousands of child soldiers Ricky eventually helped rehabilitate as founder of the internationally acclaimed charity Friends of Orphans.

Working closely with Ricky himself, debut author Keely Hutton has written an eye-opening book about a boy’s unbreakable spirit and indomitable courage in the face of unimaginable horror.

Keely Hutton is an educational journalist and former teacher. She is the recipient of the Highlights foundation Writers Workshop scholarship at Chautauqua. Since 2012, she has been working closely with Ricky Richard Anywar to tell his story. Soldier Boy is her first novel. 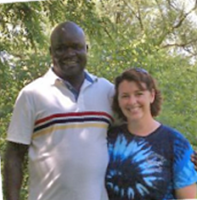 Ricky Richard Anywar is the founder of the internationally acclaimed charity Friends of Orphans, and a former child soldier in Ugandan warlord Joseph Kony’s Lord’s Resistance Army (LRA). Since escaping the LRA, Anywar has dedicated his life to rehabilitating other survivors and advocating for peace in their communities. When she’s not writing, Keely enjoys playing piano, reading, and planning Disney trips with her family

Have you had a chance to read SOLDIER BOY yet? Have you considered working with someone to tell their life story? Does Ricky's perseverance inspire you to work to change situations in our communities and around the world? Share your thoughts about the interview in the comments!