Kayla Olson, author of THE SANDCASTLE EMPIRE, on projects that serve different purposes during your journey

We're delighted to have Kayla Olson here to give us the inside scoop on her debut novel, THE SANDCASTLE EMPIRE. 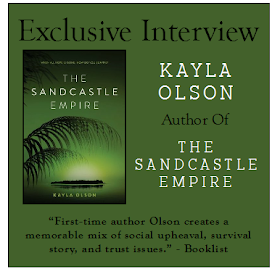 Kayla, how long or hard was your road to publication? How many books did you write before this one, and how many never got published?

I started writing back in 2009, all at once, and I haven’t stopped since. (Well, not completely. I took an inadvertent break when I had my son, but that was mostly because of extreme sleep deprivation and his 27-minute naps.) The first thing I ever wrote was a middle grade fantasy: it was about twice the length it should’ve been, which I of course did not know at the time I drafted it (or its subsequent three drafts in which I started over from scratch). I worked on that project for two years, and it’s absolutely just hanging out in my closet, having served its purpose as the project where I learned how to draft, revise, and sit at a desk day after day. I did one draft of a YA fantasy book after that, which is also in my closet (purpose: the project where I figured out my voice is more YA than MG).

After my son was born, I decided to start fresh with yet another new project, a YA time travel book. I loved that book then, and I still love it now; it was the first thing that felt special enough to maybe land an agent. When I did end up querying it, I received an offer from Holly Root and Taylor Haggerty, who work very closely together—I’m so happy to have landed with them! The day after I began the querying process, I started writing The Sandcastle Empire, and wrote it the entire time I was on submission (to agents, then editors) with the time travel book. As much as I loved the time travel book, it didn’t find its perfect home anywhere at that time, so we ended up going out with TSE instead—and I’m so happy with the way everything’s turned out! I still have the time travel YA in my back pocket, but looking back, I can’t imagine debuting with any other book.

When writing, I split my time between my home office and a couple of local coffee shops. At home, I write at a desk that was my grandfather’s; for my latest project, it helped for the room to be as dark as possible—I had never needed that before, but since I had to stop and start all throughout the process for TSE, the near-darkness helped me slip into the world of the new project a little more completely.

As for music, I can count on one hand the number of times I’ve listened to an actual song while writing! Being a musical person, my brain easily snags on melodies and lyrics, even if they’re in another language. Six years or so ago, I started listening to a thunderstorm track, and it has become the perfect background noise whether I’m at home or out at the coffee shop—I’ve listened to it so often that it’s pretty much trained my brain to think okay, now we’re in FOCUS MODE whenever I turn it on.

Right now, I’m revising what will become my Fall 2018 book with HarperTeen! I don’t want to say too much about it right now, since we haven’t announced details just yet. I will say that it’s very different on the surface from The Sandcastle Empire, but still feels very, very me—it’s another YA sci-fi/survival story, and was challenging in entirely new ways for me as a writer. I’ve loved working on this project, and can’t wait to share more! Before the war, Eden’s life was easy—air conditioning, ice cream, long days at the beach. Then the revolution happened, and everything changed.

Now a powerful group called the Wolfpack controls the earth and its resources. Eden has lost everything to them. They killed her family and her friends, destroyed her home, and imprisoned her. But Eden refuses to die by their hands. She knows the coordinates to the only neutral ground left in the world, a place called Sanctuary Island, and she is desperate to escape to its shores.

Eden finally reaches the island and meets others resistant to the Wolves—but the solace is short-lived when one of Eden’s new friends goes missing. Braving the jungle in search of their lost ally, they quickly discover Sanctuary is filled with lethal traps and an enemy they never expected.

This island might be deadlier than the world Eden left behind, but surviving it is the only thing that stands between her and freedom.

Kayla Olson is a YA writer represented by Holly Root and Taylor Haggerty of Root Literary. Author of the THE SANDCASTLE EMPIRE, which was recently optioned for film by Paramount, with Leonardo DiCaprio/Appian Way producing. Kayla Olson lives in Texas with her family. She loves the beach but would hate to be stranded on one. If she were, however, her essential survival items would be black coffee from a French press, the darkest chocolate, and an army of Sharpie highlighters.

Have you had a chance to read THE SANDCASTLE EMPIRE yet? What was your first project that proved to yourself you could write? What projects really helped you identify your voice? Do you listen to ambient music like thunderstorms? Share your thoughts about the interview in the comments!