Catherine Egan, author of JULIA DEFIANT, on unlocking the next book 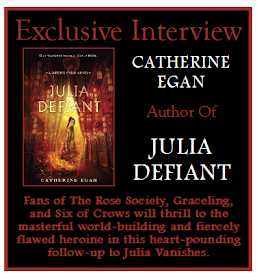 JULIA DEFIANT is book 2 in the The Witch's Child series, and we're excited to have Catherine Egan join us to share more about it.

Catherine, what scene was really hard for you to write and why, and is that the one of which you are most proud? Or is there another scene you particularly love?

There is a scene in the middle of the book when several of the characters are at the Shou-shu monastery, a betrayal is revealed, and Bianka hands her baby son Theo to Julia. It’s a huge moment emotionally, because Bianka chooses to trust Julia – who betrayed her and kidnapped her son once before – with Theo’s life. But it’s also happening in the middle of a lot of action and fighting. Fight scenes are always tough – you want the writing to flow as fast as the fight, but you also need the important details in there. Scenes with a lot of characters present are hard too – you have to figure out the staging of it, what everybody is doing, make sure everybody is present and the reader has the full picture, but without bogging the scene down with description. That scene was really hard to pull off – a lot of action, a lot of characters, and this key emotional moment between two of the characters. I rewrote it so many times, but I am happy with it now.

My favorite scenes are often the ones that came the easiest – they seem to appear fully formed and don’t require much revision. Two of my favorite scenes from this book are when a super-creepy witch delves into Julia’s memories, and when Julia and her brother have a necessary conversation about their parents and their lives on the walls of the city. I also really love the final scene of the book, but I don’t want to give a spoilery description of that one!

This is a tricky question to answer, but I suppose that if you connect with Julia, then you are probably interested in complex, action-y fantasy, morally grey situations, and morally compromised protagonists – so I’d suggest books by Marie Lu, Kiersten White, and Marie Rutkoski.

There are several AHA moments in the process of writing each book where I feel like I’ve finally figured it all out. Unfortunately, few of these moments carry over to the next book. It’s like when you have a second kid and you think that this time you know how to be a parent and you won’t screw everything up, except that it turns out the second kid is this TOTALLY DIFFERENT PERSON and requires totally different parenting. I have to figure out the key to writing each novel as I write it – in fact it’s sort of a collection of keys, and most of them are virtually useless when it comes to unlocking the next book. I suppose that realization is worth something in itself, though.

My ideal writing situation involves solitude, strong coffee, dark chocolate, and SILENCE. Sometimes I do work in cafes though, so I guess coffee is the only really crucial element. I also like to take a walk before I sit down to write, to help me think about the story. I do my best thinking in motion.

After years spent with Julia, the series is all but done (only final edits on the third book left) and so I am currently alternating between two new projects. One of them is a high-action fantasy revenge story (very loosely drawing on the Mongol Empire under Genghis Khan) that has been ridiculously fun to write, and the other is more of an atmospheric, spooky, historical fantasy about obsession, set on an imaginary island in the Shetlands. Julia and a mismatched band of revolutionaries, scholars, and thieves have crossed the world searching for a witch. But for all the miles traveled, they are no closer to finding Ko Dan. No closer to undoing the terrible spell he cast that bound an ancient magic to the life of a small child. Casimir wants that magic, and will happily kill Theo to extract it. And every moment they hunt for Ko Dan, Casimir's assassins are hunting them.

Julia can deal with danger. The thing that truly scares her lies within. Her strange ability to vanish to a place just out of sight has grown: she can now disappear so completely that it's like stepping into another world. It's a fiery, hellish world, filled with creatures who seem to recognize her and count her as one of their own.

So . . . is Julia a girl with a monster lurking inside her? Or a monster wearing the disguise of a girl?

If she can use her monstrous power to save Theo, does it matter?

In this riveting second book in the Witch's Child trilogy, Catherine Egan goes deep within the heart of a fierce, defiant girl trying to discover not just who but what she truly is. 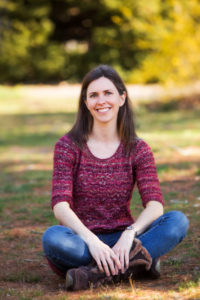 Catherine Egan grew up in Vancouver, Canada. Since then, she has lived on a volcanic island in Japan (which erupted while she was there and sent her hurtling straight into the arms of her now husband), in Tokyo, Kyoto, and Beijing, on an oil rig in the middle of Bohai Bay, then in New Jersey, and now in New Haven, Connecticut.

She is currently occupied with writing books and fighting dragon armies with her warrior children. You can read more about her at catherineegan.com and follow her on Twitter at @ByCatherineEgan

Have you had a chance to read JULIA DEFIANT yet? Are your favorite scenes the ones that come the easiest? Do you have to figure out the key to writing each novel as you write it? Share your thoughts about the interview in the comments!