A.V. Geiger, author of FOLLOW ME BACK, on balancing your navigation through social media

We are obsessed with author A.V. Gieger's debut novel, FOLLOW ME BACK, so follow us to learn the details that drove her to write her novel. 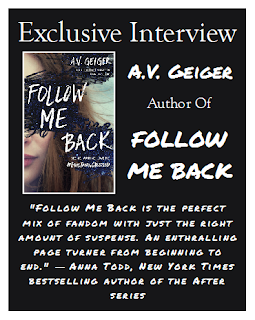 A.V. , what was your inspiration for writing FOLLOW ME BACK?

It all started in 2013, when I developed an inexplicable celebrity crush on a singer who shall remain nameless. Note: when I tell this story, people assume I'm a teenager, but I swear I'm a fully grown adult. I'd recently given birth to twins, and I blame the raging hormone fluctuations (or possibly the sleep deprivation) for my sudden and intense infatuation. The experience left me fangirling in the wee hours of the night with all the teens. I tweeted. I bought merch. I dreamed of backstage passes. I begged and pleaded for a follow from my celebrity love. And yes, I wrote fanfic: a four-book romance series about my pop-star and his fictional paramour, entitled "Obsessed." By 2014, my crush had fizzled as quickly as it began, but I'd caught the writing bug. FOLLOW ME BACK was my second original novel, written as a way of processing my brief encounter with online fandom and internet fame.


How long did you work on FOLLOW ME BACK?

I wrote the first draft in three months. FOLLOW ME BACK was originally a web serial, and I posted new chapters on Wattpad as I drafted them, with two or three new chapters appearing every week. Once I completed the online draft, I did three rounds of developmental edits with my literary agent over the next six months. The book was acquired by Sourcebooks in December 2015, and my editor took me through a few more rounds of revisions throughout 2016. All together, it will be two and a half years from story concept to publication.

FOLLOW ME BACK is a combo of wish-fulfillment tropes that will appeal to celebrity fanfiction readers, mixed with twisty psychological thriller elements for fans of GONE GIRL or PRETTY LITTLE LIARS.

What do you hope readers will take away from FOLLOW ME BACK?

You never know who you're talking to online. In FOLLOW ME BACK, my main characters learn this lesson in more than one sense. They nearly mute each other’s accounts and miss out on a deep friendship, due to the faulty assumptions they make about each other. On the other hand, the book is a thriller, and both characters find themselves in real-life danger from people who seemed harmless online. Social media requires a delicate balance between open-mindedness and skepticism with every person you encounter. I still find it tough to navigate as an adult, and I hope my book helps some teens to examine their own online behavior—whether they tend to be too trusting or too closed off.

I'm currently revising my next book! FOLLOW ME BACK has a sequel, picking up where book 1 left off. It should be hitting bookstores in June 2018. Follow Me Back
by A.V. Geiger
Paperback
Sourcebooks Fire
Released 6/6/2017

Tessa Hart’s world feels very small. Confined to her bedroom with agoraphobia, her one escape is the online fandom for pop sensation Eric Thorn. When he tweets to his fans, it’s like he's speaking directly to her…

Eric Thorn is frightened by his obsessive fans. They take their devotion way too far. It doesn’t help that his PR team keeps posting to encourage their fantasies.

When a fellow pop star is murdered at the hands of a fan, Eric knows he has to do something to shatter his online image fast—like take down one of his top Twitter followers. But Eric’s plan to troll @TessaHeartsEric unexpectedly evolves into an online relationship deeper than either could have imagined. And when the two arrange to meet IRL, what should have made for the world’s best episode of Catfish takes a deadly turn…

A.V. Geiger is an epidemiologist who spends far too much spare time on social media. By day, she studies women’s psychiatric and reproductive health. By night, she can be found fangirling, following people back, and photoshopping the heads of band members onto the bodies of unicorns.

Her writing began with celebrity fan fiction, and her work draws on her own experiences with online fan culture. Her original teen fiction has received millions of hits online, posted under the Wattpad username @adam_and_jane, with over 200,000 followers and counting. Her YA romantic thriller, Follow Me Back, was the #1 ranked Mystery/Thriller on Wattpad in 2015. A revised and expanded version of Follow Me Back will be published June 1, 2017 by Sourcebooks Fire.

Have you had a chance to read FOLLOW ME BACK yet? How do you navigate online - are you more closed-off or open-minded? What sort of relationships have come from online interactions? Who was your most embarrassing celebrity infatuation? Share your thoughts about the interview in the comments!