Happy Monday! This week, we have four awesome giveaways to feature! We're also shining a spotlight on a few more awesome books so don't forget to check out all of them below. 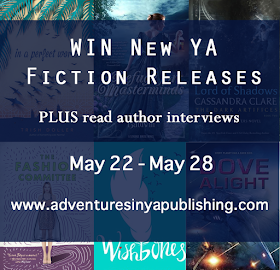 Caroline Kelly is excited to be spending her summer vacation working at the local amusement park with her best friend, exploring weird Ohio with her boyfriend, and attending soccer camp with the hope she’ll be her team’s captain in the fall.

But when Caroline’s mother is hired to open an eye clinic in Cairo, Egypt, Caroline’s plans are upended. Caroline is now expected to spend her summer and her senior year in a foreign country, away from her friends, her home, and everything she’s ever known.

With this move, Caroline predicts she’ll spend her time navigating crowded streets, eating unfamiliar food, and having terrible bouts of homesickness. But when she finds instead is a culture that surprises her, a city that astounds her, and a charming, unpredictable boy who challenges everything she thought she knew about life, love, and privilege.

Author Question: What is your favorite thing about In a Perfect World?

It's hard to narrow down my favorite thing because Caroline's dad is a stand-out character and so many mouthwatering foods to read about, but in the end, I'd probably say Adam Elhadad. He is sweet, kind of shy, and utterly charming, and I really can't wait for readers to meet him. Lady Jane Moore has a secret that must be kept buried. If anyone discovers the truth, her life at Stranje House will crumble. And with Napoleon Bonaparte’s invasion of England underway, everyone at Stranje House is already in mortal danger.

Jane knows it. She may not be like Tess, who has the advantage of prophetic dreams. Nor is she like Sera, who notices every detail no matter how miniscule and draws conclusions based on the smallest thread of evidence. She doesn’t possess Maya’s ability to soothe the tempers around her with a few well-spoken words. Neither is she a brilliant scientist like Georgie.

According to Miss Stranje, Lady Jane Moore is a mastermind.

But Jane believes herself to be an ordinary young lady. She only has an excessive bent toward the practical, grasping the facts of a situation quickly then, devising and implementing a sensible course of action. It's a trait that comes in handy in a world full of spies, sabotage, and double-dealing. Especially when Lady Jane and Sera have rooted out the truth: There's a traitor at Stranje House.

Someone is sneaking information to Lady Daneska and Ghost, Napoleon’s spies. Jane is determined to find out who it is before the bonds of friendship at Stranje House are ripped apart. Her desperate hunt for the traitor ensnares Robert Fulton’s nephew, Alexander Sinclair, a brash American inventor, in an ambush that puts his life in danger. Sinclair may be the most maddening man in all of Christendom, a wicked-tongued rascal with boorish manners, but Lady Jane cannot bear the thought of the golden-haired genius being harmed.

Is Jane enough of a mastermind to save Alexander, her friends at Stranje House, and possibly England itself?

Author Question: What is your favorite thing about Refuge for Masterminds?

I loved watching Lady Jane struggle to find her emotional balance. She's so smart. Much smarter than I am, so it was a challenge to write her, but delightful at the same time. I especially loved watching her battle her fiercely protective nature, and learn to be a little more trusting of others' capabilities. alexander is a perfect foil for her. He is so easy going and laid back compared to Jane. The way he teases her was pure fun to write. Project Runway meets I'll Give You the Sun in the story of a girl, a boy, and the fashion competition that could change both of their lives.

Charlie Dean is a style-obsessed girl who eats, sleeps, and breathes fashion. John Thomas-Smith is a boy who forges metal sculptures in his garage and couldn't care less about clothes. Both are gunning for a scholarship to the private art high school that could make all their dreams come true. Whoever wins the fashion competition will win the scholarship--and only one can win.

Told in the alternating voices of Charlie's and John's journals, this hilarious and poignant YA novel perfectly captures what it's like to have an artistic drive so fierce that nothing--not your dad's girlfriend's drug-addicted ex-boyfriend, a soul-crushing job at Salad Stop, or being charged with a teensy bit of kidnapping--can stand in your way.

With black and white art custom-created by fashion and beauty illustrator Soleil Ignacio, the book is a collector's item, perfect for anyone with a passion for fashion.

Author Question: What is your favorite thing about The Fashion Committee?

The book gave me a chance to write about what is great about fashion and what is deeply problematic about it. The adventures of Charlie and John allowed me to explore fashion as an art form and as a means to create identity. The book combines a lot of my obsessions and for that I'm grateful.


1)To get her mum healthy again


When Feather comes home on New Year’s Eve to find her mother – one of Britain’s most obese women- in a diabetic coma, she realises something has to be done to save her mum’s life. But when her Mum refuses to co-operate Feather realises that the problem run deeper than just her mum’s unhealthy appetite.


Over time, Feather’s mission to help her Mum becomes an investigation. With the help of friends old and new, and the hindrance of runaway pet goat Houdini, Feather’s starting to uncover when her mum’s life began to spiral out of control and why. But can Feather fix it in time for her mum to watch her swim to victory? And can she save her family for good?

Author Question: What is your favorite thing about Wishbones?

That's easy: Feather Tucker, my protagonist. As soon as I found her voice and spent some time getting to know her, I knew that she'd be the perfect character to carry my story. She's courageous, passionate and idealistic - and has some flaws too (she thinks she can save her mum and the world all by herself!). She's also quirky - I have a weakness for those kind of people both in life and in fiction. Above all she's loveable: I loved writing her and recognise her character traits in so many of the amazing young people I know. I hope that readers, young and old, will fall in love with her too. Oh, and a close second favourite (if I'm allowed) is Houdini, her pet goat. They kind of go together.


The Best Kind of Magic by Crystal Cestari: Erika C.
The Truth About Happily Ever After by Karole Cozzo: Patricia M. A thrilling new YA novel from master of suspense James Patterson, who's created a frightening new future: a world where teens are taken, imprisoned, and forced to fight for their survival. Where 17-year-old Cass will do whatever it takes to save her twin sister from Death Row.

There were no charges. There was no trial. There will be no escape.

Seventeen-year-old Becca Greenfield was snatched from her small hometown. She was thrown into a maximum-security prison and put on Death Row with other kids her age. Until her execution, Becca's told to fit in and shut her mouth... but Becca's never been very good at either. Her sister Cassie was always the perfect twin.

Becca's only hope is that her twin sister will find her. That perfect little priss Cassie will stop following the rules and start breaking them, before it's too late. Because her jailers made a mistake that could get them both killed:

They took the wrong twin. The action-packed finale of this explosive sci-fi series for fans of Ender’s Game and Star Wars.

Shy, introverted Phaet Theta has gone from being a top student to an interplanetary fugitive to the reluctant but fierce leader of a revolution. With the Earthbound on their side, she and her friends finally have a chance at toppling the evil leaders who’ve held the Moon captive for decades. But as the death tolls rise, the cost of the war weighs heavily on Phaet, even as she’s forced to lead her siblings and Wes, the love of her life, into terrible danger.

Phaet started this war because she lost someone she loved. Will she have to lose another to end it? Sunny Los Angeles can be a dark place indeed in Cassandra Clare’s Lord of Shadows, the sequel to the #1 New York Times and USA TODAY bestselling Lady Midnight.

Emma Carstairs has finally avenged her parents. She thought she’d be at peace. But she is anything but calm. Torn between her desire for her parabatai Julian and her desire to protect him from the brutal consequences of parabatai relationships, she has begun dating his brother, Mark. But Mark has spent the past five years trapped in Faerie; can he ever truly be a Shadowhunter again?

And the faerie courts are not silent. The Unseelie King is tired of the Cold Peace, and will no longer concede to the Shadowhunters’ demands. Caught between the demands of faerie and the laws of the Clave, Emma, Julian, and Mark must find a way to come together to defend everything they hold dear—before it’s too late. The Maze Runner meets Scott Westerfeld in the final novel in the gripping and romantic Cage series, about teens abducted from Earth by an otherworldly race.

Cora and her friends have escaped the Kindred station and landed at Armstrong—a supposed safe haven on a small moon—where they plan to regroup and figure out how to win the Gauntlet, the challenging competition to prove humanity’s intelligence and set them free. But Armstrong is no paradise; ruled by a power-hungry sheriff, it’s a violent world where the teens are enslaved and put to work in mines. As Nok’s due date grows closer, and Mali and Leon journey across space to rescue Cassian, the former inhabitants of the cage are up against impossible odds.

With the whole universe at stake, Cora will do whatever it takes, including pushing her body and mind to the breaking point, to escape Armstrong and run the Gauntlet. But it isn’t just a deranged sheriff she has to overcome: the other intelligent species—the Axion, Kindred, Gatherers, and Mosca—all have their own reasons to stop her. Not knowing who to trust, Cora must rely on her own instincts to win the competition, which could change the world—though it might destroy her in the process.