Kathleen Baldwin, author of REFUGE FOR MASTERMINDS, on being surprised how a character resonates with readers

We are pleased to have Kathleen Baldwin here to tell us more about the third book in her Stranje House series, REFUGE FOR MASTERMINDS. 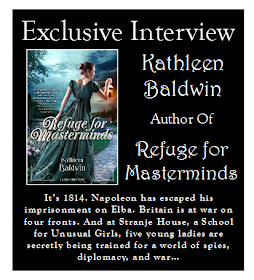 Kathleen, what was your inspiration for writing REFUGE FOR MASTERMINDS?

It surprised me to learn that Lady Jane is the character out of all five girls at Stranje House that the most readers told me they identify with. At a signing two girls approached and one stood directly in front of me. Her friend said, "She is Lady Jane."

Confused I asked, "Do you mean her name is Jane?"

"No. She IS Lady Jane. She's so much like her, they could be twins." The other young lady nodded, affirming her friend's assessment.

This and similar experiences surprised me, because while Jane is extremely capable, I'd also made her a bit bossy, kind of like me. Apparently a lot of readers relate to that trait. Who knew?

My daughter is brilliant, a mastermind in her own right. She's able to juggle multiple projects at her architectural firm and still do an amazing job. So she was a key resource as I wrote Lady Jane's story.
What scene was really hard for you to write and why, and is that the one of which you are most proud? Or is there another scene you particularly love?

I love the scene where the wolf pups were born, but one pup with a misshapen leg can't get to it's mother. I cried every time I worked on it. The pup symbolized so much to Jane--and to me. Thank goodness Lady Jane did what needed to be done. I couldn't have borne it otherwise.

How long did you work on REFUGE FOR MASTERMINDS?

I worked for eight months on REFUGE FOR MASTERMINDS. Several months of editorial process followed that. I'm a slow writer. The world of Stranje House and research into Napoleon and the political undercurrents of the time is a little more complicated than it seems. Also I  work several weeks with the character before I actually dive into the writing. I interview the character and try to get underneath the surface just as I used to do for nonfiction magazine articles.

I love to arc my characters. I like to watch my hero or heroine go from fearful to courageous, as Georgie did in the first book. But Lady Jane's problem is that she tries to take care of everyone around her. She's a caretaker and consequently a little bossy. I sooooo wanted Jane to arc. I was eager to see how she would move from bossy to not bossy, caretaker to trusting those around her to take care of themselves. I was eager because those are traits I would like to change in myself. Well, surprise, surprise, Lady Jane did arc, but in unexpected ways. AND I learned some exciting things about these traits I battle. For instance, they're not all bad. As with many gifts they're two -edged swords. The exciting thing was that Lady Jane learned how to put them in perspective. That was wonderful for me.

What do you hope readers will take away from REFUGE FOR MASTERMINDS?

That they nudge the world forward every day. That who they choose to love, the people they befriend, their gifts and talents, all these things change the world. So often we think that what we do only affects us, but in truth, decisions we make today may change things for generations to come.

Yes! What turned the lights on for me was a little book called, Creating Character Emotion by Ann Hood. The moment I learned how to capture emotions on the page -- oh wow! Everything changed. I came to fiction from a background in journalism, nonfiction, and tended to write from an impartial observer's viewpoint. I believed the reader ought to draw his or her own emotional conclusions. I still want readers to draw their own conclusions, but now I bring them with as much emotional context to the story as my skills will allow.

Learning to write emotions moved my fiction from unpublished to published. Because of that, I teach a workshop on writing emotion -- to give back. Lady Jane Moore has a secret that must be kept buried. If anyone discovers the truth, her life at Stranje House will crumble. And with Napoleon Bonaparte’s invasion of England underway, everyone at Stranje House is already in mortal danger.

Jane knows it. She may not be like Tess, who has the advantage of prophetic dreams. Nor is she like Sera, who notices every detail no matter how miniscule and draws conclusions based on the smallest thread of evidence. She doesn’t possess Maya’s ability to soothe the tempers around her with a few well-spoken words. Neither is she a brilliant scientist like Georgie.

According to Miss Stranje, Lady Jane Moore is a mastermind.

But Jane believes herself to be an ordinary young lady. She only has an excessive bent toward the practical, grasping the facts of a situation quickly then, devising and implementing a sensible course of action. It's a trait that comes in handy in a world full of spies, sabotage, and double-dealing. Especially when Lady Jane and Sera have rooted out the truth: There's a traitor at Stranje House.

Someone is sneaking information to Lady Daneska and Ghost, Napoleon’s spies. Jane is determined to find out who it is before the bonds of friendship at Stranje House are ripped apart. Her desperate hunt for the traitor ensnares Robert Fulton’s nephew, Alexander Sinclair, a brash American inventor, in an ambush that puts his life in danger. Sinclair may be the most maddening man in all of Christendom, a wicked-tongued rascal with boorish manners, but Lady Jane cannot bear the thought of the golden-haired genius being harmed.

Is Jane enough of a mastermind to save Alexander, her friends at Stranje House, and possibly England itself?

Award-winning author Kathleen Baldwin loves adventure in books and in real life! She taught rock climbing in the Rockies, survival camped in the desert, was stalked by a mountain lion, lost an argument with a rattlesnake, enjoyed way too many classes in college, and married her very own hero. Together they’ve raised four free-spirited adventurous children.

A SCHOOL FOR UNUSUAL GIRLS is Kathleen’s first alternate history series for teens. It was awarded 2016 Spirit of Texas, is a Junior Library Guild selection, and Kansas State NEA Reading Circle gave it a starred review in their “Best of the Best” for High Schools. Ian Bryce, producer of Spiderman, Saving Private Ryan, and other films optioned the series for film.

Have you had a chance to read REFUGE FOR MASTERMINDS yet? Have you ever been surprised by how a character resonated with readers? How many characters have you "interviewed" and written about that helped give you insight into your own life? Share your thoughts about the interview in the comments!