Karole Cozzo, author of THE TRUTH ABOUT HAPPILY EVER AFTER, on a character originally not being in the story

The truth is we are happy to have Karole Cozzo here to share more about her latest novel, THE TRUTH ABOUT HAPPILY EVER AFTER. 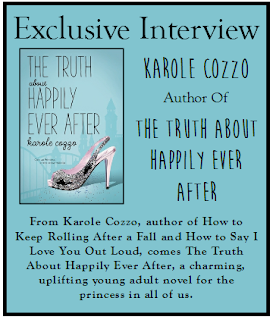 Karole, how long did you work on THE TRUTH ABOUT HAPPILY EVER AFTER?

I wrote the first draft in about four months over the summer of 2015. Originally, the story was told from a different character's point of view; actually, it was a whole different story entirely. My editors thought Alyssa, who was a secondary at the time, had a more compelling story to tell. At first I was really upset, because I was attached to my characters and disappointed to hear their story wasn't 'working.' But I've definitely learned to trust my editors and I agree, 110%, that the revised version is so much better! And Miller wasn't even in the first story, which is hard for me to even fathom now. I wrote the revised version in about seven weeks - I was a woman on a mission and I turned my initial disappointment into motivation to come up with something better.

Related to above... LISTEN TO CONSTRUCTIVE CRITICISM! And it's HARD! It's hard no matter how many times you practice, how you mentally remind yourself that negative feedback is important in all endeavors and is nothing to take personally. For awhile, I fought to find a way to make the original variation of the story work. It was hard to abandon it and start all over. But after I wrote the new version, when I reconsidered everything I'd heard about my first attempt, it was all so clear. It takes time for the sting to fade, it takes time to get over the initial feeling of disappointment or failure, but if you can take constructive criticism and churn out improved results, it's usually worth it rather than abandoning an idea entirely.

There's one scene where Alyssa, as Cinderella, takes part in her first event for the Make-a-Wish Foundation held at the theme park where she works (The Enchanted Dominion). It was difficult delving into Alyssa's observations of the sick children and their parents and definitely painful to write. However, I am proud of that scene, because it's a big part of Alyssa's growth process before she's even aware that she is starting to be true to herself even when it doesn't align with the relationship she's in at the time. She says, "Feelings are hard, but I don't think I'd want to shut mine off." It's sort of foreshadowing what she experiences in the second half of the book, and I love that she comes to that realization before she's forced to. It's an emotional scene on many levels; grab the tissues! Chin up, Princess, or the crown will slip.

A theme park princess must put her life back together after her happily ever after falls apart in this contemporary YA romance from Karole Cozzo, author of How to Keep Rolling After a Fall and How to Say I Love You Out Loud.

Everything was supposed to be perfect. Alyssa has a job she loves, working as Cinderella at her favorite theme park; a fantastic group of friends; and a boyfriend who will no longer be long distance. But as the summer progresses, her prince becomes less charming and more distant, and Alyssa's perfect summer falls apart.

Forced to acknowledge that life is not always a fairy tale, Alyssa starts working to pull her herself back together. Fortunately, she doesn't have to do it alone. With her friend Miller's support, she's determined to prove that she's more than just a pretty princess. And with his help, maybe she's finally ready for something better than dreams.

Maybe she's ready for something real.

Karole lives outside of Philadephia, PA with her loving husband, eternally exuberant little girl, and perpetually pleasant little boy.  Hobbies include nursing a persistent Starbucks addiction, eating way too much candy, emptying her wallet at Target, spending time with her family, decorating her home, and completing any other crafty project she can think of.  Karole has degrees in School Psychology, women's studies, and biology but has never taken a formal creative writing course, although she'd really like to one day.

Have you had a chance to read THE TRUTH ABOUT HAPPILY EVER AFTER yet? Have you had to completely rewrite your story? Was it hard for you to let go of your characters? Was it made better when new characters were introduced, that wouldn't have had a spot in your story before? Share your thoughts about the interview in the comments!