I first met Chris Ledbetter at an SCBWI conference back in 2011 in Los Angeles where we sat beside each other at an intensive workshop given by the great Bruce Coville. Chris was working on a book called The Sky Throne, and I remember beta reading The Sky Throne a year later on my way down to a workshop just before I got an agent for Compulsion. And I remember every step of Chris' long journey trying to find a home for it. It's inspirational, because he didn't give up on the story or his writing.

The Sky Throne releases today, and I was excited to be asked to officially say nice things about it, which was easy because it's an exciting story with fabulous world-building and a fresh take on the mythology I love.

And it proves that publishing is subjective and based on factors other than the story. So read on, fellow writers. Enjoy!

STICKING WITH THE STORY YOU LOVE
AGAINST ALL ODDS

Gather close, my friends. The tale I will tell is a story of dark and stormy nights, woe heartbreak, climbing the sheer crags on the far side of the moon, conviction, redemption, faith, and victory. If that sounds like a motley crew of elements, you’d be right. But it also happens to be true. All of it. Well, all except the climbing on the moon part. I confess, that’s a metaphor.

Three years into my writing journey, when I still didn’t know all that I didn’t know, I got an idea to write a Greek god coming of age story. I’d loved mythology to my core ever since I was a pre-teen. And there was no novel on the market at the time telling the story I wanted to tell, so I powered forward with The Sky Throne in early 2011.


I critiqued it… sent to BETA readers… revised it, and then took it on the road to the Los Angelos SCBWI conference and promptly got kicked in the face by agent critiques. I revised more and decided to query it. Form Rejections. Bruised and battered but undaunted, I applied to the Nevada SCBWI Mentor Program. And by some divine blessing, I got accepted!
After two full revisions over six months, I queried again. Nothing. Three years into my journey with The Sky Throne, I was ready to give up. As a last ditch effort, I entered the story into pitch contests… and FINALLY I got some nibbles. Vindicated by not one, but two full requests, I marched off to the store to price champagne.
Two full requests = Two passes.

It didn’t have the right voice.
We’ve all heard these refrains, right?
Devastated, I tried my hand at writing something completely different. When I finished my new story called Drawn, about a young artist and his crush, I actually had an agent contact me again about The Sky Throne. They had passed on it before, but had a change of heart. Long story short, I finally got an agent! Yes! Back to the champagne store! Woot.

But alas… then a month into the honeymoon period with my agent, our professional relationship dissolved, details of which I’ll not divulge. Back to square one. But… and this is huge… getting the agent was the final shot of adrenaline I needed. I took my shiny, new confidence and subbed to publishers directly. And then FINALLY (after five years, for ya’ll playing along at home) finally, I got my redemption with a publishing contract for The Sky Throne with Month9 Books.

Sometimes, publishing is all about timing. Sometimes, you have to put a story on the shelf for a minute. And sometimes the industry isn’t quite ready for your tale, and a new category will have to be created by your book. The moral, kids, is that if you believe whole-heartedly in your story… then exhaust every opportunity to improve it craft-wise, shop it widely, and heed the criticism and advice that makes sense. Apply to mentor programs. Workshop it in SCBWI intensives. Enter contests. Eventually, the light you think you see at the end of the tunnel may in fact by the light hanging over your desk as you sign your contract. 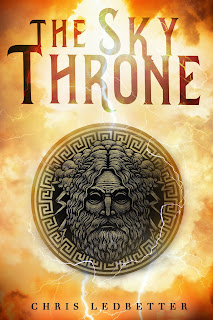 Duality dwells at every turn, and an adolescent Zeus will learn that all too well when Hyperion attacks his family on Crete.

When the dust settles, his mother is unconscious and his best friend left for dead.

Stacking epic insult upon fatal injury, Zeus discovers the woman who raised him is not his biological mother. But to ensure her safety while she recovers, a heavy-hearted Zeus leaves her behind to seek answers at Mount Olympus Preparatory Academia.

Zeus embarks on a quest to discover who ordered the attack on his home, avenge the death of his friend, and find his birth mother. When some of his new schoolmates vanish, Zeus's quest is turned upside down, and the only way to make things right is to access the power of The Sky Throne, confront a most dangerous enemy, and take his life back.

On his way to becoming king of the Greek gods, Zeus will learn to seize power, neutralize his enemies, and fall in love.


Early Praise for The Sky Throne:

“Full of plot twists, pranks, and unexpected details from Greek mythology, The Sky Throne is a superhero origin story perfect for Rick Riordan fans!” ~ Martina Boone, award-winning author of Compulsion and the Heirs of Watson Series.


“Destined to have a sequel or two, young teens will appreciate the story, and teachers will appreciate that it instructs readers about the pantheon of gods.” ~ VOYA Magazine.
“I am blown away by the sheer magnitude of the task Mr. Ledbetter set himself for this novel: To create a Harry-Potter-style school for Greek gods, a la Rick Riordan and his Percy Jackson series BUT (but!) to allow us to see a young Zeus as awkward with girls (!) like any typical teenaged boy, one of the many characteristics that endows him with a sort of humanity that is rarely portrayed in Greek mythology. He also twists the "known myth" of Zeus's parentage in a way that turns the whole thing into an action-adventure-thriller that makes this book a must-read.” ~ Liz Crowe, Award-winning author of more than 30 novels.

“Chris Ledbetter weaves an action-packed mythological tale in his newest book The Sky Throne. Anyone who knows anything about Greek myths knows the main character Zeus is destined for greatness. What you might not know about him, though, are his insecurities. His needing to belong. His rocky past.

Combine this "coming-of-deity" story with rival schools, hot-headed competition, teenage hormones, and an unexpected trip to the Underworld, and you've got yourself a page-turning story!” ~ Kim Harnes, Award-winning author.

“Ledbetter takes the best pieces of contemporary YA and gives them their own mythological flare. The academia of Harry Potter becomes the independent schools of the Mediterranean and Aegean. The survival of The Hunger Games is embodied by Zeus’s ingenuity throughout the story. Even tones of Red Rising can be felt in the opening pages of the very humble beginnings of a character we have known about for thousands of years.” ~ Hungry Monster Review

Chris Ledbetter is an award-winning author of short fiction and novels for young adults. “Jason’s Quest,” a short story retelling of the Jason and Medea Greek myth was published in the anthology, Greek Myths Revisited. His first full-length novel, Drawn earned him two awards, Library of Clean Reads Best YA 2015 and Evernight Publishing Readers’ Choice Award Best YA 2015, as well as a USATODAY “Must Read” recommendation. His second novel, Inked, concludes that duology. The Sky Throne is his newest young adult novel.

He's a proud member of SCBWI (Society of Children's Book Writers and Illustrators) and a strong supporter of the Need for Diverse Books. He now writes and lives in Wilmington, NC with his family, including three cats.

Additional Information:
Chris Ledbetter grew up in Durham, NC before moving to Charlottesville, VA in 11th grade. After high school, he attended Hampton University where he promptly "walked-on" to the best drum line in the CIAA. And, without any prior percussion experience. He carried the bass drum for four years, something his back is not very happy about now.

After a change of heart and major, he enrolled in Old Dominion University and earned his degree in Business Administration. He's worked in various managerial and marketing capacities throughout his life. While teaching high school for six years in Culpeper, VA, he taught business management, business law, marketing, and sports marketing, and also coached football.