Happy Monday! This week, we have a giveaway for Kelley Armstrong's MISSING! Don't forget to check out all the other new releases too and enter to win below. 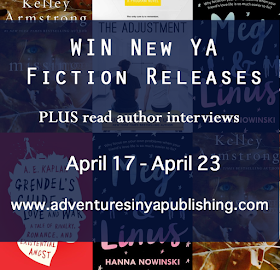 The only thing Winter Crane likes about Reeve’s End is that soon she’ll leave it. Like her best friend did. Like her sister did. Like most of the teens born in town have done. There’s nothing for them there but abandoned mines and empty futures. They’re better off taking a chance elsewhere.

The only thing Winter will miss is the woods. Her only refuge. At least it was. Until the day she found Lennon left for dead, bleeding in a tree.

But now Lennon is gone too. And he has Winter questioning what she once thought was true. What if nobody left at all? What if they’re all missing?


Blacksouls by Nicole Castroman: Leah H.
Cheesus Was Here by J. C. Davis: Sally Z.
Given to the Sea by Mindy McGinnis: Tammy V.
The Freemason's Daughter by Shelley Sackier: Gina B The Perks of Being a Wallflower meets Revenge of the Nerds in this tale of a teen misfit who seeks to take down the bro next door, but ends up falling for his enemy’s sister and uncovering difficult truths about his family in the process.

Tom Grendel lives a quiet life—writing in his notebooks, mowing lawns for his elderly neighbors, and pining for Willow, a girl next door who rejects the “manic-pixie-dream” label. But when Willow’s brother, Rex (the bro-iest bro ever to don a jockstrap), starts throwing wild parties, the idyllic senior citizens’ community where they live is transformed into a war zone. Tom is rightfully pissed—his dad is an Iraq vet, and the noise from the parties triggers his PTSD—so he comes up with a plan to end the parties for good. But of course, it’s not that simple.

One retaliation leads to another, and things quickly escalate out of control, driving Tom and Willow apart, even as the parties continue unabated. Add to that an angsty existential crisis born of selectively reading his sister’s Philosophy 101 coursework, a botched break-in at an artisanal pig farm, and ten years of unresolved baggage stemming from his mother’s death…and the question isn’t so much whether Tom Grendel will win the day and get the girl, but whether he’ll survive intact. Can friendship, Star Trek, drama club, and a whole lot of coffee get two nerdy best friends through the beginning of their senior year of high school?

Meg and Linus are best friends bound by a shared love of school, a coffee obsession, and being queer. It’s not always easy to be the nerdy lesbian or gay kid in a suburban town. But they have each other. And a few Star Trek boxed sets. They're pretty happy.

But then Sophia, Meg’s longtime girlfriend, breaks up with Meg. Linus starts tutoring the totally dreamy new kid, Danny—and Meg thinks setting them up is the perfect project to distract herself from her own heartbreak. But Linus isn’t so sure Danny even likes guys, and maybe Sophia isn't quite as out of the picture as Meg thought she was. . . .

From crowdsourced young adult imprint Swoon Reads comes Meg & Linus by Hanna Nowinski, a fun friendship story about two quirky teens who must learn to get out of their comfort zones and take risks—even if that means joining the drama club, making new friends, and learning how to stand on your own. How do you go back to a life you can’t remember? Find out in this follow up to the New York Times bestselling The Program and The Treatment.

Tatum Masterson never went through The Program. She never had her memory stripped, never had to fight to remain herself. But when Weston, her longtime boyfriend and love of her life, was taken by handlers, she hoped he’d remember her somehow—that their love would be strong enough.

Like all returners, Weston came back a blank canvas. The years he and Tatum spent together were forgotten, as well as the week when he mysteriously disappeared before The Program came for him.

Regardless of his memory loss, Tatum fights to get Weston to remember her. And just as they start to build a new love, they hear about the Adjustment—a new therapy that implants memories from a donor. Despite the risks, Tatum and Weston agree to go through the process. Tatum donates her memories from their time together.

But the problem with memories is that they are all a matter of perspective. So although Weston can now remember dating Tatum, his emotions don’t match the experiences. And this discrepancy is slowly starting to unravel him, worse than anything The Program could have done.

And as the truth of their life together becomes clear, Tatum will have to decide if she loves Weston enough to let him go, or to continue to live the lie they’d build together.

Prepare for your Adjustment.