Ira Bloom, author of HEARTS & OTHER BODY PARTS, on cutting off a limb

We are thrilled to chat with Ira Bloom about his debut novel HEARTS & OTHER BODY PARTS. 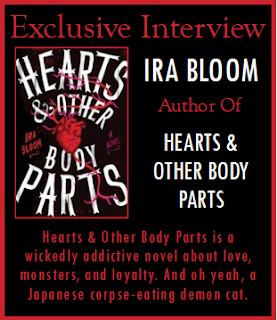 Ira, what scene was really hard for you to write and why, and is that the one of which you are most proud? Or is there another scene you particularly love?

The hardest scene to write was the scene where Esme, the main character, consults the tarot in order to get an edge over her sisters in the competition for Zack, the hot new boy at school who is the object of their obsessions. I originally wrote the scene with a rather passive-aggressive magic eight ball. It was eight pages long and I was very pleased with it. I couldn’t believe nobody else had ever written anything like it. It seemed so familiar, somehow. Then I happened to reread the book I’d stolen the idea from. No, it wasn’t plagiarism, just bad long-term memory. So I rewrote the scene, this time with Esme logging onto a demonic website where she trades little bits of her immortal soul for info. That scene was twelve pages. Unfortunately, when the first draft was finished, the book was 537 pages long, and I had to cut almost a third, so those twelve pages had to go. They were dragging the action. Finally I rewrote the scene with the tarot deck and got it down to a page and a half.

The scene I loved the most was the prologue. We cut it out entirely, and I’m glad we did, but I can’t say it wasn’t a little like cutting off a limb.

About writing, this book was the master course, because it’s my debut novel so I got to see the inner workings of the publishing industry. I got to observe the contracting process, and the book design, and the revision process from beginning to end. I’d done revisions before with my first agent, but it was nothing like working with a real editor. I guess the most important thing I learned from this book is to TRUST YOUR EDITOR!

What do you hope readers will take away from HEARTS & OTHER BODY PARTS?

I really just hope the readers will enjoy the book. I’d always wanted to be a writer, and I have a degree in literature and creative writing. I studied Chaucer, Shakespeare, and all the “literary” writers. But I was first inspired to get off my butt and actually start writing by the Harry Potter series. James Joyce is brilliant, don’t get me wrong, but nobody ever lined up at midnight to buy THE DUBLINERS. And I doubt anyone ever got halfway through MOBY DICK and started counting the pages to the end with dread, savoring every word because there wouldn’t be another book for two more years. I write YA because high school was a time of great discovery for me, and a time when I failed at the simplest things on a daily basis. It was a time when I made mistakes that I still cringe over whenever they come to mind, and a time when I made friends who will always be my closest. It’s so easy to lose your head in high school, because your world-view opens up so much, so fast, and at the same time there are all these hormones. Everything is so fresh and new and invested with such meaning or passion, it’s very difficult to find balance. HEARTS & OTHER BODY PARTS is full of information that the readers will doubtless find useful in every aspect of their lives, such as how to keep one’s head while negotiating a contract with a demon, or why one shouldn’t put a triple whammy on one’s little sister. Also, never date a cad, especially if he’s a vampire.

It took me fifteen years. HEARTS & OTHER BODY PARTS was my third book. The first one took six years to write, and I couldn’t get an agent, despite two years of tinkering and rejections. The second one took six months, and got me an agent but no sale. HEARTS took about a year and a half to write, another six months in revision before we sent it out, three months to sell, and there was another twenty months to the pub date. When HEARTS was out on submission, I was in Japan, and on the way to the airport to return to the USA, I got an email from my agent that he was leaving the biz, and since I hadn’t sold a book yet, my contract would not necessarily be picked up by Writers House. I’d been a client for almost three years. I stewed and fretted all the way across the Pacific. Years and years of work, to get to that point, and I had to start all over from scratch to get another agent. That may have been the absolute hardest six hours of the whole fifteen years.

When we landed for a layover in Honolulu, I found wi-fi again and opened another email from my agent. My dream editor at Scholastic LOVED the book.

Another agent at Writers House agreed to read the book and took me on as a client. So things worked out eventually, but it took a lot longer than I’d ever imagined it would.

The Japanese are fond of the expression “Jinsei nana korobi, ya oki,” which means, roughly “If life knocks you down seven times, get up eight.” That’s great advice for a writer, because writing can be an exercise in futility sometimes. Writing a book will knock you down a lot more than eight times, and you have to get back up every time and get back to work. And writing the book isn’t the end of the struggle, by any means.

I’m working on a sci-fi multiverse romance with a first person female protagonist, the two sequels to HEARTS & OTHER BODY PARTS, a book about a high school freshman who doesn’t realize that he’s an incarnate tulka (living Buddha), a book with a farcical twist about a girl possessed by a demon, and a revision of a previous book which I couldn’t sell and the two sequels. This is undeniably the stupidest way to make progress on anything, because if I know one thing about writing, it’s that it takes focus. It would be cool if I continued nibbling away at all of them at the same time and eventually finished all eight books all at once, but I very much doubt it’s going to go down like that. Must. Focus.

A novel of love and monsters.

Sisters Esme, Katy, and Ronnie are smart, talented, and gorgeous, and better yet . . . all three are witches. They have high school wired until the arrival of two new students. The first is Norman, who is almost eight feet tall and appears to be constructed of bolts and mismatched body parts. Despite his intimidating looks, Esme finds herself strangely -- almost romantically -- drawn to both his oversized brain and oversized heart.

The second new arrival is Zack, an impossibly handsome late transfer from the UK who has the girls at school instantly mesmerized. Soon even sensible Esme has forgotten Norman, and all three sisters are in a flat-out hex war to win Zack. But while the magic is flying, only Norman seems to notice that students who wander off alone with Zack end up with crushed bones and memory loss. Or worse, missing entirely.

Hearts & Other Body Parts is a wickedly addictive novel about love, monsters, and loyalty. And oh yeah, a Japanese corpse-eating demon cat. Ira Bloom grew up in Annapolis Maryland. He studied English Literature at the University of Maryland, College Park. He also has some background in Eastern religions. After college Bloom moved to Japan, where he taught ESL. He married a beautiful Japanese woman named Yasuko, moved to LA and taught junior high school English, ESL, and Japanese for the Los Angeles Unified School district. After serving his debt to society in LA Unified, Bloom went into the fashion business with his wife, who is a very talented fashion designer. They eventually branched into the vintage kimono business. Bloom claims he probably knows more about Japanese textiles than any straight white man you’re likely to encounter. He has been writing humor for FUNNY TIMES since 2010. Bloom currently lives in West Sonoma County with his family and an assortment of furry beasts.

Have you had a chance to read HEARTS & OTHER BODY PARTS yet? Do you agree with Ira and the special affect YA has on you? What was the book that made you want to start writing?Share your thoughts about the interview in the comments!