Hanna Nowinski, author of MEG & LINUS, on the first draft not being meant to be pretty

We are excited to be joined by Hanna Nowinski to get the inside scoop on her debut novel MEG & LINUS.

Hanna, how long did you work on MEG & LINUS? 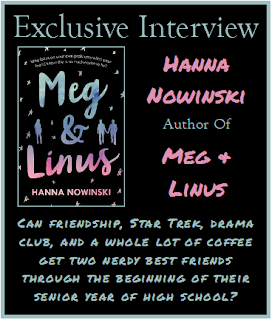 The initial draft didn't take that long - between six and eight weeks. I took a couple more weeks after that to edit. Once I start a project I try to focus on it entirely and take very little time off, so I go through those initial stages pretty fast. After my work with the first draft is done, I have to wait for my beta readers to get a chance to look it over. Beta readers are great and can really speed up the editing process because you get a fresh perspective and a faster idea of what works and what you have to cut. I had several friends reading it over, but they were all really fast, too, so I didn't have to wait more than another four weeks at most until I'd heard back from all of them. I needed about another month after that to go over their suggestions and fix everything up before I submitted it. So all in all it took me less than half a year between starting the project and submitting it. I don't always work that fast, but I jumped right into this story and just kept going until it was done. Of course the editing process after I'd signed my contract took longer than that.

Mostly it taught me that I can get it done if I really commit myself to it. I'd started other stories in the past that just never got finished because I lost momentum or because I wrote myself into a corner that I couldn't get out of. But with this book I pushed through that by skipping scenes that slowed me down in the moment and returning to them afterwards when I had a better idea of what they really needed to be like. So what I really learned from it was that I have to keep going and I don't have to get every detail right on the first try. A first draft has to exist, and you can fix what needs fixing once you have that raw version of the story you want to tell.

I go back and forth between being 120% focused and winging it. So I have parts of the process where I basically lock myself in a room with my laptop and completely tune out everything else for days at a time, and then I'll sit in the park and just jot down ideas in the notepad app on my phone, or I'll chatter away about my characters to my friends and annoy them into giving me their opinions. Only fellow writer friends I know online, though! I don't really talk about my projects to people I see in person every day. During those times I don't censor myself a lot - I have an idea, I write it. I've never written in a coffee shop or library, but I have once written an entire chapter in an email to myself during a four-hour bus ride. Mostly I set aside specific writing time in my day, but that doesn't always work out. It depends a bit on the scene or chapter I'm working on in that moment.

Realistically, your first draft is going to suck. That's normal. It's not meant to be pretty, you can take care of that later. Tell your story, and once you've done that go back and work on making it readable. Don't get discouraged when you can't find the right words on the first try. No one does. All of your favorite books you've ever read were awkward and choppy rough drafts once. The longest part of the writing process is taking that hideous mess and making it better round after round after round. Don't focus so much on what it looks like right now, but focus on what you want it to be eventually. You can do it! Can friendship, Star Trek, drama club, and a whole lot of coffee get two nerdy best friends through the beginning of their senior year of high school?

Meg and Linus are best friends bound by a shared love of school, a coffee obsession, and being queer. It’s not always easy to be the nerdy lesbian or gay kid in a suburban town. But they have each other. And a few Star Trek boxed sets. They're pretty happy.

But then Sophia, Meg’s longtime girlfriend, breaks up with Meg. Linus starts tutoring the totally dreamy new kid, Danny—and Meg thinks setting them up is the perfect project to distract herself from her own heartbreak. But Linus isn’t so sure Danny even likes guys, and maybe Sophia isn't quite as out of the picture as Meg thought she was. . . .

From crowdsourced young adult imprint Swoon Reads comes Meg & Linus by Hanna Nowinski, a fun friendship story about two quirky teens who must learn to get out of their comfort zones and take risks—even if that means joining the drama club, making new friends, and learning how to stand on your own.

Hanna Nowinski is a language enthusiast and trained translator for German and English who lives in the middle of nowhere, Germany. She has wanted to be a writer since she learned that books were made by real people. As a kid, she made up her own bedtime stories, mostly sending her stuffed animals on adventures around the world. She loves books, music, coffee, and getting way too emotionally invested in TV shows. Meg & Linus is her debut novel.

Have you had a chance to read MEG & LINUS yet? Do you have beta readers for your projects? What is your strategy when a scene is slowing you down? Do you skip over it like Hanna until you can better understand it? Share your ideas for overcoming this obstacle in the comments!