Cyndy Etler, author of the memoir THE DEAD INSIDE, on proving she can do the impossible

We are living for the chance to talk with Cyndy Etler about her debut memoir THE DEAD INSIDE. 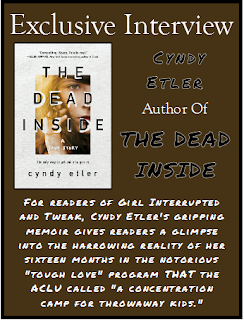 Cyndy, what was your inspiration for writing THE DEAD INSIDE?

For 16 months of my childhood, I was locked in a warehouse. Straight Inc., it was called. The granddaddy of today’s boot camp program for teens. For my 486 days in Straight I was beaten, physically and psychologically, by my peers. The memories were rotting away in my brain, like a head of lettuce left too long in a produce drawer. I needed to write about it, to clean out the mess. But I couldn’t. Flat ink on pages could not convey the terror. My memories stayed locked in the fridge.

It was 11 years ago, while reading aloud to my class of high school sophomores, when I got my rubber gloves. The text was Elie Wiesel’s Night. In the prologue he describes being asked, over and over, to write about his experiences in the concentration camps. His response was a question: how do you describe horrors for which there are no words? You cannot. And yet, he did.

The next day, 4:30 a.m. found me hunched over my produce drawer, a wire-bound notebook in my lap and a zebra pen in my hand. Finally, I knew what I needed to use: not words, but experiences. I would put myself back there, back in Straight Inc., back in the warehouse. I would relive it on the page. This time, though, I would take readers with me. This time, I wouldn’t be alone. The Dead Inside is me, proving to myself that I can do the impossible.

The book was going swimmingly, and then I hit an iceberg: Review. Review was Straight’s twice-weekly firing line, its saturated torture chamber. For my first Review, and every one thereafter, I was helpless, trapped, and terrified. But how to convey that, with words my only tools? Impossible. Impassable. My brain and pen shut down.

The book was in deep freeze for months. My psyche wouldn’t let me progress, if I couldn’t conquer Review. But Review wouldn’t let me conquer it, because my psyche was still that of a puny 14-year-old girl.

Three months into the freeze I was heading back from a writing workshop. I had a four-hour drive in front of me, so I popped in my early-teen-years favorite album: Pink Floyd’s The Wall. When “The Trial” came thundering through the speakers—that scene where Pink is judged and slaughtered by his peers—my iceberg splintered and cracked. I had to pull over to sob and hyperventilate as I relived Review through the song. They’re identical, I realized. The steps of the trial, the emotion in the music, the thrill of the murderous crowd. Review and “The Trial.” They match.

Next morning, 4:30 a.m., the first Review scene came scrolling out of my pen, panning from Straight to The Wall and back. And yes. When a reader says they particularly love the Floyd scenes, I feel good. I feel really, really good.

What do you hope readers will take away from THE DEAD INSIDE?

This one, I could fit on a bumper sticker: Teens who act “bad” are secretly asking for love. It’s a truism that far too few grownups understand. When kids don’t get love at home, they eventually get sick of waiting and resort to love substitutes: drugs, sex, shoplifting, whatever’s in reach. When teachers and librarians and friends’ parents and counselors learn to speak the language, learn to meet that need, those “bad behaviors” disappear. Snap! Gone.

I’m rubbing fine-grit sandpaper over The Dead Inside’s sequel, We Can’t Be Friends. It follows the trajectory out of the Straight warehouse and into a place far scarier: my suburban Connecticut high school. The Straight experience left me brainwashed and terrified of the “outside world”; I was a suicidal PTSD 15-year-old when I returned to school. Thank God I found Paula Abdul, and sober dances, and that one awesome English teacher who totally, totally gets it.


Cyndy's publisher is running a fabulous giveaway, so make sure to enter below!

For readers of Girl Interrupted and Tweak, Cyndy Etler's gripping memoir gives readers a glimpse into the harrowing reality of her sixteen months in the notorious "tough love" program the ACLU called "a concentration camp for throwaway kids."

I never was a badass. Or a slut, a junkie, a stoner, like they told me I was. I was just a kid looking for something good, something that felt like love. I was a wannabe in a Levi's jean jacket. Anybody could see that. Except my mother. And the professionals at Straight.

From the outside, Straight Inc. was a drug rehab. But on the inside it was...well, it was something else.

All Cyndy wanted was to be loved and accepted. By age fourteen, she had escaped from her violent home, only to be reported as a runaway and sent to a "drug rehabilitation" facility that changed her world.

To the public, Straight Inc. was a place of recovery. But behind closed doors, the program used bizarre and intimidating methods to "treat" its patients. In her raw and fearless memoir, Cyndy Etler recounts her sixteen months in the living nightmare that Straight Inc. considered "healing." 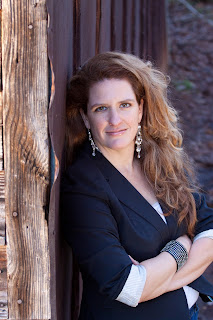 Today Cyndy is a young adult author. Her YA memoirs are honest and raw, taking readers into the real-life experience of a kid who will do anything to feel accepted.

When she’s not writing, Cyndy is coaching teens. With humor and non-judgement, she helps kids figure out what they most want, and how to get it.

Cyndy holds a Master’s degree in Secondary Education and a Bachelor’s degree in English and American Studies from the University of Massachusetts Boston. She is a Certified Youth Life Coach via Youth Coaching Institute, and a licensed English, Special Education and English as a Second Language teacher.

Cyndy’s debut memoir, THE DEAD INSIDE, will be released by Sourcebooks Fire in April of 2017. The sequel, WE CAN’T BE FRIENDS, will be published in October of 2017.

After years of hopscotching across the country, Etler now lives in Charlotte, North Carolina, with her husband and her dogs.

Have you had a chance to read THE DEAD INSIDE yet? Have you considered writing a memoir but aren't sure that you can? What songs have given you the push you needed to continue? Share your thoughts about the interview in the comments!