Tricia Levenseller, author of DAUGHTER OF THE PIRATE KING, on no longer trying to please others

We are ecstatic to sit down with Tricia Levenseller and hear more about her debut novel DAUGHTER OF THE PIRATE KING. 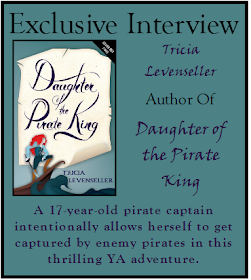 Tricia, what was your inspiration for writing DAUGHTER OF THE PIRATE KING?

Pirates of the Caribbean. Hands down. I just love how the movie combines fantastical elements with pirates. This is something I’d never seen before, and I was blown away. I knew I wanted to do something similar, but with an entirely different premise, a female pirate lead, and way more romance!

How long did you work on DAUGHTER OF THE PIRATE KING?

DAUGHTER OF THE PIRATE KING is the fourth book I wrote. My first book got me an agent, but we didn’t have any takers when we went on submission. My second book went out on submission and also didn’t have any takers. Then, my agent just flat out didn’t like my third book. So then I wrote DAUGHTER OF THE PIRATE KING. I sent it to my agent, who also didn’t like that book. Finally, I decided it was time to find new representation. I landed with my current agent and DotPK found a home with Feiwel and Friends!

Never forget to always keep the writing fun. You do your best work when you’re enjoying what you do and not trying to please others. Sitting down and finishing a novel is important, of course, but sometimes it’s also important to make sure you’re getting what you need to out of your writing. A 17-year-old pirate captain intentionally allows herself to get captured by enemy pirates in this thrilling YA adventure.

If you want something done right . . .

When the ruthless pirate king learns of a legendary treasure map hidden on an enemy ship, his daughter, Alosa, knows there's only one pirate for the job—herself. Leaving behind her beloved ship and crew, Alosa deliberately facilitates her own kidnapping to ensure her passage on the ship, confident in her ability to overcome any obstacle. After all, who's going to suspect a seventeen-year-old girl locked in a cell?

Then she meets the (surprisingly perceptive and unfairly attractive) first mate, Riden, who is charged with finding out all her secrets. Now it's down to a battle of wits and will . . . . Can Alosa find the map and escape before Riden figures out her plan?

Debut author Tricia Levenseller blends action, adventure, romance, and a little bit of magic into a thrilling YA pirate tale.

Initially from a small town in Oregon, Tricia now lives next to the Rocky Mountains with her bossy dog, Rosy. She received her degree in English Language and editing and is thrilled that she never has to read a textbook again. When she’s not writing or reading, Tricia enjoys putting together jigsaw puzzles, playing volleyball, and watching shows while eating extra-buttered popcorn.

Have you had a chance to read DAUGHTER OF THE PIRATE KING yet? Have you participated in NaNoWriMo? What did you write? Do you feel like you are trying to please others? Tell us what you learned and how you made writing fun again like Tricia. Share your thoughts about the interview in the comments!