Rin Chupeco, author of THE BONE WITCH, on defining your own beauty

We are so glad to have the opportunity to sit down with Rin Chupeco and talk about her latest novel THE BONE WITCH. 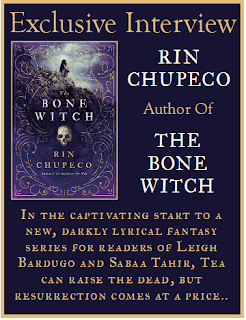 Rin, what do you hope readers will take away from THE BONE WITCH?

Asha - my group of geisha-like fighters - make up the core of the book. They're entertainers and lovers and warriors and friends, and they come in all shapes and sizes. There are light-skinned and dark-skinned asha, plump and thin asha, short and tall asha, asha with hijabs, and LGBTQ asha. Beyond the ability to channel magic, there is no other requirement to be asha, and I feel that's very important to stress: you define your own beauty.

In the long run, it's not about writing; it's about having written. As a writer, the story ideas in your head amount to nothing if you don't put it down on paper and hammer at it on all sides until it starts to resemble a manuscript. The hardest part of being a writer is always about finishing your story, and you cannot be a writer until you meet this requirement. There will be a lot of teeth-gnashing and hair-pulling and general despair - we call this the writing process. But the rewards are worth it.

I'm currently finishing up edits for THE HEARTSGLASS, sequel to The Bone Witch. I'm also working on another fantasy series with a modern fairy tale bent and a Filipino MC. It's a bit harder to write than others I've done because of the enormity of the fairy tales involved - putting all those different stories and cultures in one book, and then trying to put your own modern twist to it has been daunting, but I'm in a good place with it. When Tea accidentally resurrects her brother from the dead, she learns she is different from the other witches in her family. Her gift for necromancy means that she’s a bone witch, a title that makes her feared and ostracized by her community. But Tea finds solace and guidance with an older, wiser bone witch, who takes Tea and her brother to another land for training.

In her new home, Tea puts all her energy into becoming an asha — one who can wield elemental magic. But dark forces are approaching quickly, and in the face of danger, Tea will have to overcome her obstacles…and make a powerful choice.

Memoirs of a Geisha meets The Name of the Wind in this brilliant new fantasy series by Rin Chupeco!

Despite an unsettling resemblance to Japanese revenants, Rin always maintains her sense of hummus. Born and raised in Manila, Philippines, she keeps four pets: a dog, two birds, and a husband. Dances like the neighbors are watching. She is represented by Rebecca Podos of the Helen Rees Agency. You can follow her on Twitter at @rinchupeco, pinterest at Rin Chupeco, or check out her blog at rinchupeco.com.

Have you had a chance to read THE BONE WITCH yet? Did you like the different representations of the Asha? Have you been scared to write down some of your ideas? Did Rin's philosophy on the subject encourage you to get your stories written down? Share your thoughts about the interview in the comments!