Melissa Landers, author of STARFALL, on giving her characters the endings they deserve

We are so happy to chat with Melissa Landers about STARFALL, the second book in the Starflight series. 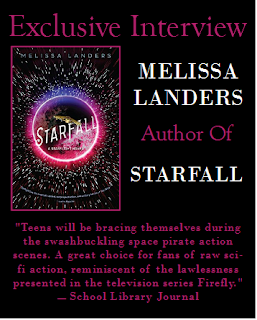 Melissa, what is your favorite thing about STARFALL?

I think my favorite part of writing Starfall was giving Cassia and Kane the character arcs and the endings that they deserve. During Starfall, both of them grow into the people they were meant to be, and there’s nothing more rewarding than that…at least for an author. ☺

What was your inspiration for writing STARFALL?

I drew a great deal of inspiration from American history when writing this series. In book one, I modeled the premise after the events of Westward Expansion, and book two was largely inspired by the rise of Las Vegas, particularly the mafia’s nefarious means of getting—and keeping—employees.

I don’t want to reveal too much and spoil you, but the last chapters involving Kane’s struggle were both difficult and rewarding to write. Though it was painful to make him suffer, he emerged from it a stronger person.

How long did you work on STARFALL?

It took me about five months to create a clean draft. After that, I spent another couple of months on revisions, copy edits, etc. before the book was ready for print. So all in all, about seven months.

Right now I’m waiting for my edit letter for The Half King, my 2018 release. It’s the first in a high fantasy duology about a failed oracle who leaves her temple sanctuary to serve a mysterious young king who turns to shadow at sunset. Fantasy is a slight departure for me, but I’ve been enjoying it! When Princess Cassia Rose fled her home world of Eturia to escape an arranged marriage, she had no idea her sudden departure would spark a war. Now after two years hiding as a ship hand, she is finally returning to her beloved home, but not in the way she imagined. Shackled by bounty hunters, she is violently dragged back to account for her crimes. Her only solace is that the Banshee crew managed to evade capture, including Kane Arric, her best friend ... with occasional benefits.

Meanwhile, Kane and the rest of the crew of the Banshee plan a desperate rescue mission. But when they arrive on Eturia, Cassia isn't exactly in need of heroics—she's claimed her birthright as Eturia's queen, but has inherited a war-torn planet simmering with rebellion. Cassia must make alliances, and Kane, the bastard son of a merchant, isn't a choice that will earn her any friends. Kane knows he will never find someone to replace Cassia—and is certain she returns his feelings—but how can he throw away his own promising future waiting on a queen?

When the outer realm is threatened by the dangerous Zhang mafia, Cassia, Kane and the rest of the Banshee crew uncover a horrifying conspiracy that endangers the entire universe. In the face of unspeakable evil, Cassia must confront her own family's complicated legacy on Eturia and decide once and for all who her real family is.

Melissa Landers is a former teacher who left the classroom to pursue other worlds. Melissa Landers writes romantic sci-fi & fantasy for teens and the young at heart. A proud sci-fi geek, she isn’t afraid to wear her Princess Leia costume in public—just ask her husband and three kids. She lives just outside Cincinnati in the town of Loveland, “Sweetheart of Ohio.”

Have you had a chance to read STARFALL yet? Did you pick up on the historical inspiration in the Starflight series? How did you feel about Kane's suffering? Do you think it was important in his journey? Share your thoughts about the interview in the comments!