We are so glad Lish McBride had the chance to stop by and tell us more about her latest novel PYROMANTIC. 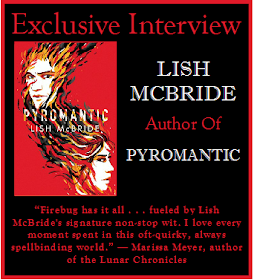 Lish, what was your inspiration for writing PYROMANTIC?

I don't think there was one set thing, but a lot of it came from an article I read about bats and white-nose syndrome. Nothing is weirder and creepier than nature.

I don't think any particular scene was hard to write. I think I most enjoyed the quiet scenes where Ava really grows as a character. They aren't as flashy, but they're important.

I think anything by Rosemary Clement Moore would be a good choice--especially her Maggie Quinn vs Evil series. ML Brennan's books as well--they're written for adults but the humor and such is similar.

How long did you work on PYROMANTIC?

It seems like forever. I honestly don't know. There were a lot of stops and starts due to personal and health reasons.

Due to various circumstances, there were a lot of times where I just wanted to quit during this book. Not because of the book, but just writing in general. There was much discussion in my house of me becoming a goat farmer. Seriously. Just a lot of frustration over the last year or so. But after every tirade about goat farming, my husband would gently remind me that I would still write even then, and it's not something I can just quit. So just the fact that this book is finally done and almost out is somewhat of a personal triumph. I haven't given up on writing, not yet. (But I haven't given up entirely on the goat thing, either.)

What do you hope readers will take away from PYROMANTIC?

I'm never quite sure how to answer such questions. I hope that they really enjoy it, and I hope that it ends up being one of those books that they want to reread someday or pass on to a friend. Beyond that, I'm always a little surprised as to which scenes and lines resonate with readers.

I'm somewhat freakish in that I published the first novel that I ever wrote. I wrote a lot and practiced a lot before I took a crack at the whole novel thing, but I'm still surprised that the first one made it. So far I've written five novels, one currently in the hands of an editor for possible acquisition. But I'm fully aware that someday I'll write a novel that will likely end up in a drawer somewhere. It happens to all of us.

The "AHA!" moment was less magical realization and more practical necessity--Hold Me Closer, Necromancer was my thesis to graduate from my MFA program. I either had to write a novel or put together a short story collection, and I knew my stories needed a lot of work. I also figured it wast the only time people would have to help me put a novel together, so I took advantage of having that support system. My thesis advisor (author Amanda Boyden) made inquiries with her agent to see if he knew anyone that handled the kind of thing that I was writing (Amanda writes literary fiction, whereas I'm solidly in the genre boat) and it just so happened that someone in his agency did. My thesis was handed off to Jason Anthony who called me two days later and I had an agent. It just worked out that he gets what I'm trying to do and we work really well together. He's still my agent and we sold that book 4 months after I graduated. I worked really hard to get to that point, but the actual getting an agent thing went really smoothly for me for some reason. Again, not the norm.

My writing ritual is less ritual and more stealing of any and all available time. I have a day job at a bookstore. I also have a twelve year old and a high-energy toddler who hates it when I even look at my computer. I write after bedtimes. I hide in a coffeeshop with other writers on Tuesdays and write as much as I can. Generally to music, but lately I've been using an online ambient mixer that my reader friend Sarah recommended that has theme "rooms" like the Gryffindor common room and that's worked really well. I write during nap times and sometimes I go to work early so I can write there before my shift starts. I miss having several days a week to write. Now I'm excited if I get an hour to myself to work on things.

There are lots of times when you want to give up--this happens whether you are published or unpublished. Take a break if you need to. Breaks are good. But try to remember why you started writing in the first place. (I had to keep reminding myself that, "writing is fun, damn it!" several times during the last few books.) Read as much as you can. Write as much as you can...but don't forget to go outside once in awhile. After all, you do need things to write about.

I'm working on a few things. One is a stand alone novel about fairytale curses. The other is a book I co-wrote with Martha Brockenbrough that is currently in the hands of an editor, so I can't really talk about that one yet. I'm also writing short fiction on my Patreon page. One of those stories was recently published along with another one that I'd already written under the title Freaks & Other Family. I've also written a few articles lately on Tor.com for writers--one about your first book event and how to handle no show events. I think that's about it! Ava is having a rough time. Getting rid of Venus didn’t set her free—she’s still Coterie. Her new boss seems like an improvement, but who knows if he’ll stay that way? The Coterie life changes people. And since she’s currently avoiding her friends after (disastrously) turning down a date with Lock, well, everything kind of sucks.

Then she gets sent to handle two local thugs with were-hare Sid. But when they arrive, the thugs are dead and a necromancer has raised them as mindless, aggressive zombies. Ava is faced with an epidemic—something is turning normal creatures into killing machines. Unfortunately, this means she has to work with Lock and his new girl. Worse than that, she has to work with her ex, Ryan. Compared to facing such emotional turmoil, she’d rather take on an entire herd of flesh-eating kelpies . . . or she could just do both. Isn’t she just the lucky gal?

Lish McBride is the author of funny and creepy Young Adult books such as Hold Me Closer, Necromancer; Necromancing the Stone; Firebug; and Pyromantic. She has published short stories in the Normal School, Tor.com, and the anthologies Cornered, What to Read in the Rain, Freaks & Other Family, and Kisses & Curses. She got her BFA in creative writing from Seattle University and her MFA from University of New Orleans. Lish is also currently a bookseller and event host at Third Place Books, a giant thriving indie bookstore just outside of Seattle. Her first book, Hold Me Closer, Necromancer, was an ALA Best Book for Young Adults title, Morris Award finalist, and won the Scandiuzzi Children’s Book Award. While she has no long term goals for world domination, she would like her own castle.

Have you had a chance to read PYROMANTIC yet? Has your fiction been inspired by a science article? Have you written a book for a class project or thesis and tried to get it published? Share your thoughts about the interview in the comments!