K.M. Walton, author of ULTIMATUM, on being rejected by 148 agents

We're delighted to have K.M. Walton stop by and give us the scoop on her latest novel ULTIMATUM. 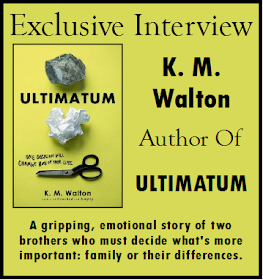 K.M., what was your inspiration for writing ULTIMATUM?

My inspiration for ULTIMATUM came from a very personal experience – the death of my father-in-law. I watched my husband and his younger brother experience their father’s death in hospice. Sitting in the corner, watching them watch their father, my writer-brain clicked on and I thought: what if two teen brothers, who didn’t understand each other had to watch their father die in hospice?

As with all of my ideas, as soon as I got home I jotted it down on a post-it. Thankfully, my husband and his brother are very different from Oscar and Vance. They’re best friends, always have been, and they used their strong bond to get through their father’s death. Even though the brothers in Ultimatum aren’t based on my family, the hospice reality is. Anyone who has intimately experienced hospice knows it leaves an indelible impression.

The scene in ULTIMATUM I particularly love involves one of Oscar’s drawings and a graduation cap. I can’t explain it further without giving anything away but when you read the book I think you’ll understand my adoration.

At the risk of sounding wildly self-promotional, I have to say that readers who end up loving ULTIMATUM would definitely love my debut novel, CRACKED. The stories are not related, but the alternating POV structure, along with the emotional story would absolutely appeal to ULTIMATUM fans.

My road to publication was hard. H A R D. I queried for 2.5 years and racked up 148 agent rejections on three different novels. I joined professional writing organizations, went to national and local conferences, took classes, took workshops, spent countless hours researching the world of traditional publishing, put my query and writing out there for public critique, blogged a lot, cried, quit, cried more, quit a second time. And in the midst of all that, like writers everywhere, I wrote five novels.

CRACKED was the fourth novel I’d written and my first YA – my first three novels were MG. As soon as I finished writing CRACKED I announced to my husband, “I just wrote the book that’s going to land me an agent.” I knew it. Even with that bold declaration, it still took me a year!

A gripping, emotional story of two brothers who must decide what's more important: family or their differences.

Oscar is misunderstood. Ever since his mother died, he's been disrespected and bullied by his family, and he seeks refuge in his art. Vance is a popular athlete and wishes his brother would just loosen up and be cool. It was hard enough to deal with their mother's death without Oscar getting all emotional. Vance just wants to throw himself into partying, to live.

But when their father's alcoholism sends him into liver failure, the two boys must come face-to-face with their demons-and each other-if they are going to survive an uncertain future.

K. M. Walton is a graduate of West Chester University, with a degree in elementary education. As a former middle-school language-arts teacher she's passionate about education and ending peer bullying. Since her novels shine the light onto the hideous effects of bullying, she gives school presentations on the topic "The Power of Human Kindness." She is represented by Jim McCarthy from Dystel & Goderich Literary Management. She lives in PA with her husband, two sons, cat, and turtle.

Have you had a chance to read ULTIMATUM yet? Have you been in the middle of something in your life like K.M. and her family, and gotten inspiration for your novel? How many times have you quit writing? What pushed you to keep going? Share your thoughts about the interview in the comments!