Kirsty Murray, editor of EAT THE SKY, DRINK THE OCEAN, on the futures of young women

We are so thankful to have the opportunity to discuss Kirsty Murray's latest novel EAT THE SKY, DRINK THE OCEAN. 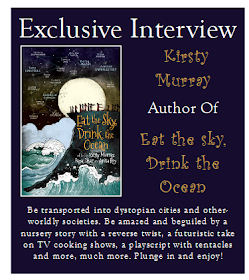 Kirsty, what was your inspiration for writing EAT THE SKY, DRINK THE OCEAN?

In December 2012, at the end of a couple of months spent working in India, I caught up with my publisher, the Indian writer Anita Roy, at Dilli Haart Market in Delhi. It was the same week in which a 20 year old student, Jyoti Singh, was brutally raped and murdered. In my hometown of Melbourne, Australia, a beautiful young woman had been raped and murdered in September of 2012, only metres from her home. They were both such depressing stories of violence and misogyny that when Anita and I started talking about new ideas for projects, those two crimes cast a long shadow over our conversation. We couldn't help but talk about how urgent it is to open up new ways of imagining the futures of young women – what they can hope for and what we hope for them. Payal Dhar had tossed around the idea of an anthology of Indian speculative fiction and from that kernel of an idea grew a bigger, bolder project that became 'Eat the Sky, Drink the Ocean.'

While we were discussing titles for the anthology, I was reading about the International World Workers Union (Wobblies) as research for a novel I was working on. One of the Wobblies marching songs written by the American songwriter Joe Hill talked about ‘pie in the sky’ – something you couldn’t have in this lifetime because the bosses and the preachers told the working people that their rewards would only come in the next life. ‘Pie in the sky’ became a popular saying that is still in use today. The term implies the impossible, which we all rather liked, but it also seemed to connect to Chairman Mao’s saying that ‘Women hold up half the sky’. So we started bouncing around the idea of what was expected of women – holding up their half of the sky with limited hope of reward – and decided to invert that idea. As the Indian graphic novelist Amruta Patil pointed out, women are often instructed to eat modestly, to restrict both their appetite and their ambitions. We all wanted to turn those ideas on their head. To ‘Eat the Sky, Drink the Ocean’ embraces endless possibilities of inverting old rules, of being at one with the planet, of dreaming and doing impossible things.

How long did you work on EAT THE SKY, DRINK THE OCEAN?

From that very first conversation in Delhi in December 2012 it took two years and eight thousand emails to bring the book to life. I managed to get an Australia Council for the Arts grant to make sure all the writers and artists were paid for their contributions. It's really important that all writers assert their right to be paid for their work but especially so for women, who are often discouraged from taking their financial security seriously. The grant took some of the pressure off the publishers in taking a risk on such an unusual anthology. But in order to get the grant and to convince publishers to take on the project, Anita, Payal and I had to be really clear about what we were planning and to make sure all the writers and artists in India and Australia were committed to the project. The book has had a rolling release - first in December 2014 in India, then February 2015 in Australia and now, at last, in its latest beautiful incarnation here in the USA.

Working on 'Eat the Sky, Drink the Ocean' taught me a lot about the importance of respecting the integrity of other people's ideas. Feminism is a broad church and everyone had a different idea about how to interpret the editorial brief we sent them. Editing the work of other writers that I deeply admire made me think more deeply about the whole editorial process. I'd never imagined that collaboration could be so richly rewarding and so much fun!

What do you hope readers will take away from EAT THE SKY, DRINK THE OCEAN?

Imagining alternate realities is the first step in changing our present. The anthology offers a way of thinking about how gender is constructed. A good book asks questions of its readers and we hope this anthology leads to conversations between teen readers, both male and female. The stories offer a fantastic and fantastical way to think – and re-think – issues of discrimination, violence, identity, sexism, equality.

I'm really lucky to have had a rewarding career in publishing for young people. Since 1998, I've had 19 books published, including eleven novels for kids and teenagers. I always wanted to be a professional writer but it wasn't until I was in my thirties that I developed the confidence to really start working in a steady and consistent way. I have a couple of completed novels in a bottom drawer that I'm really glad I wrote before I was published and which I would now never submit for publication because they're pretty sloppy. I also have dozens of unfinished books in files all over my computer which I hope to knock into shape over the next decades. I believe it's important to think of a writing life as long journey and that no single book is as important as the whole body of work that you'll produce in a lifetime.

My rituals change all the time, often depending on the weather. If I'm being deeply organised, I'll work in my home office that overlooks my garden. Australian summers can be gruelling and my office has no air-conditioning so in a heat wave, I'll retreat to a library. When I'm restless I'll hit a coffee shop. If my real life becomes too distracting, I'll run away from home and find somewhere different to work. When I'm on a roll, the world disappears and it doesn't matter where I am.

Be brave. Don't be afraid to be innovative, to try different genres and to really challenge and test yourself. There's so much advice out there about conforming to different 'rules of writing' that it's easy to lose your confidence and feel overwhelmed. Have faith that if you write with courage and integrity, your readers will find you.

Be brave about what you read, too. Reading widely, reading books from other cultures, difficult books, books about people with whom you may feel you have nothing in common, helps you to understand your own work more fully. Writing is powerful. Acknowledge that power and have faith in your ability to wield it. Twenty contributors from India and Australia—including Printz Award–winning author Margo Lanagan and New York Times bestsellers Justine Larbalestier and Samhita Arnir—team up to create a groundbreaking collection of feminist stories about the connections we all share.

These are just a few of the stories told in Eat the Sky, Drink the Ocean, a collection of sci-fi and fantasy tales that reimagine what girls—and boys—can be and who they can see themselves as.

Born of a collaboration between award-winning Indian and Australian authors, Eat the Sky, Drink the Ocean is about connections: between men and women, boys and girls, between the past, the present, and the future. Through short stories, graphic novellas, and a play, the reader will discover new worlds where the strengths of women and men are celebrated and honored, and where magical realism is blended with self-confidence.

Kirsty Murray writes books for children and teenagers. She was born in Melbourne where she first discovered the power of a good story. Kirsty’s works includes eleven novels as well as nine other books for young people. Her novels have won and been shortlisted for many awards and published internationally. Every year, Kirsty teaches creative writing and shares the joy of reading with thousands of young people in libraries, schools and at literary festivals around the world. Kirsty is a passionate advocate of books for readers of all ages.
---