This week on WOW Wednesdays, AYAP is joined by Entangled Teen author, Casey Griffin, whose book SECRETS OF A RELUCTANT PRINCESS will be released next week on March 7th. Casey is here to discuss how to keep going when the path to publication can sometimes be long and unpredictable.

Stay tuned for a bit about Casey's book, but first, here's how to stay motivated if the book of your heart doesn't sell or when you face ongoing rejection…

After writing for nearly a decade now, facing all sorts of ups and down to get my career off the ground, the best piece of advice I can give you is to be flexible.

This book is THE ONE… Right?

Maybe you’re working on your first book, or maybe you’ve been writing for years. I know that the book you’re currently working on feels like the one. And who knows? Maybe it is. Maybe you’ll be one of the lucky ones who wrote the right book at the right time and got it into the right hands. But what if it’s not the one?

What if you place all your writing hopes and dreams on that one book and then it doesn’t sell? Or a publisher picks up another book exactly like it weeks before you’ve finished yours? Or the industry shifts its focus away from its obsession with vampires / werewolves / zombies / fairies / etc? What if your book is left in the dust with no home? Plenty of mine certainly were.

When your book doesn’t sell…

If your first book truly turns out to be the one, then I congratulate you (and please get ahold of me after this post to tell me your secret). But if it’s not, listen up: don’t limit yourself by putting all your eggs in one basket, err…book.

Be persistent. Not inflexible.

I was never amazing in English class, I never studied literature in university, and I only got into reading for pleasure after I graduated. So did I think my first book was going to be the next big thing? No. Did I hope it was? Yes. Was it unrealistic? Probably. But did I stop there? Absolutely not!

YA Fantasy was my first love—Oh, Harry Potter, what a monster you’ve created. So naturally, when I began writing, I wrote fantasy. When my first novel went nowhere, I wrote another YA fantasy. Sure, it kick-started my career path by placing me in the finals of the ABNA contest, but it never made it to the shelves. But that was okay. I had plenty more ideas where that came from. So I wrote another fantasy. And then another. I was limiting myself by fixating on a single genre.

By opening your own eyes, you can open up your opportunities.

Eventually, I listened to the wise advice of my agent who kept encouraging me to try my hand at contemporary. I’d resisted for a long time, thinking, “But all I know is fantasy.” Well, it turns out that since I live in reality—occasionally—I guess I can write about it too. And I was really happy with the results.

Once I stepped out of the box I’d put myself into, I found there was no limit to what I could write. In fact, when one of my now-editors approached me and asked, “Do you write adult romance?” I was like, “I do now!” Because, suddenly, I could write anything and still find storylines I felt just as passionate about. I just needed to be open to it. That doesn’t mean I can’t go back to writing fantasy. It just means that I’m better able to roll with the publishing punches and bounce back from rejection. It made me a well-rounded writer. It made me more likely to get published.

Don’t wait for the publishing tides to turn your way. Chart your own course.

Times change in the publishing industry. Fads come and go, and then come around again. Sometimes you think you’ve found your voice, only to be told it sounds nothing like you. It’s not just about being persistent after rejection. I was certainly persistent with my fantasy obsession, but I wasn’t helping myself any, was I?

It’s about being flexible, trying new things, exploring new genres and voices. That’s how we grow as writers and how we learn new things about ourselves and our art. One of my editors was the first person who told me that my writing was humorous. I’m funny? Who knew? I always thought people were laughing at me, not with me :) And I never would have known if I hadn’t written Secrets of a Reluctant Princess.

“You never fail until you stop trying.” – Albert Einstein

Don’t feel disheartened if your current book doesn’t sell. Writing is a process, we learn, we grow, we constantly improve our craft. Rejection is just part of the process. Not a failure.

Looking back, I’m happy my first book didn’t sell. I bet if I read it today, I’d think it was terrible. But I wouldn't be where I am or have developed the skills I possess today without that first book, or the second, or the third…

There is no failure in the path to publication unless you give up trying. No matter how many books it takes, if you truly love writing, you’re still doing something you enjoy regardless of the outcome.

Push yourself out of your comfort zone. What can it hurt? It will only make you a better writer. 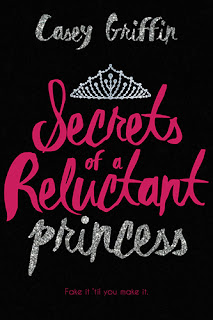 About SECRETS OF A RELUCTANT PRINCESS
At Beverly Hills High, you have to be ruthless to survive…
Adrianna Bottom always wanted to be liked. But this wasn’t exactly what she had in mind. Now, she’s in the spotlight…and out of her geeky comfort zone. She’ll do whatever it takes to turn the rumor mill in her favor—even if it means keeping secrets. So far, it’s working.

Wear the right clothes. Say the right things. Be seen with the right people.
Kevin, the adorable sketch artist who shares her love of all things nerd, isn’t exactly the right people. But that doesn’t stop Adrianna from crushing on him. The only way she can spend time with him is in disguise, as Princess Andy, the masked girl he’s been LARPing with. If he found out who she really was, though, he’d hate her.

The rules have been set. The teams have their players. Game on.
Amazon | B&N | Goodreads 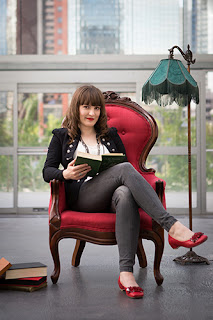 About Casey Griffin
Casey Griffin can often be found at comic conventions on her days off from her day job, driving 400 ton dump trucks in Northern Alberta, Canada. As a jack of all trades with a resume boasting registered nurse, English teacher, and photographer, books are her true passion. Casey is a 2012 Amazon Breakthrough Novel finalist, and is currently busy writing every moment she can.
Website | Blog | Twitter | Facebook | Goodreads
Kelly deVos at 8:00 AM