Katherine Webber, author of THE HEARTBEATS OF WING JONES, on racking up an impressive number of query rejections

We are excited to sit down with Katherine Webber to learn more about her debut novel THE HEARTBEATS OF WING JONES. 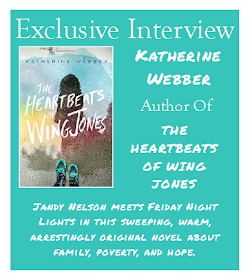 Katherine, what was your inspiration for writing THE HEARTBEATS OF WING JONES?

The idea of writing about a girl runner had been bouncing around in my brain for years. I ran track and cross country in high school and while I loved parts of it, I also found it very difficult! I used to fantasize about being a naturally talented runner, and it just coming effortlessly. So when I finally sat down to start what would become WING JONES, I had all these questions about this girl runner character. Who was she? Why was she special? Why was she running? Why didn’t she know she was a talented runner? Wing’s brother Marcus came next, and then her grandmothers, and the whole story went out from there.

Wing’s character came to me very clearly, very early on. Once I knew who she was, and what was important to her, her voice came very easily. Of course I had to make some changes and further develop her character during the editorial process, but I always felt like I knew who Wing was. Same with her grandmothers and her brother. Aaron, her brother’s best friend, actually needed the most work. I knew why Wing had a crush on him, but it wasn’t coming across on the page as clearly. I hope it does now!

I also worked with some brilliant sensitivity readers who helped me develop specific cultural aspects of Wing’s home life. They also caught any issues around word choice or character descriptions that didn’t feel authentic or appropriate.

The Sun is Also a Star by Nicola Yoon, The Sky is Everywhere by Jandy Nelson, The Serpent King by Jeff Zentner, Eleanor and Park by Rainbow Rowell

What do you hope readers will take away from THE HEARTBEATS OF WING JONES?

THE HEARTBEATS OF WING JONES is actually my fourth finished manuscript! My first one was a hot mess of a fantasy middle-grade novel that I now know was terrible but still love it with my whole heart. Maybe I’ll completely rewrite it one day! I didn’t send that out to anyone, but I seriously queried the next two manuscripts I finished. One was a fantasy and one was a sort of adventure thriller. I racked up an impressive 121 rejections…and then I wrote Wing Jones and received offers of representation from almost every agent I sent it to. It sounds cheesy, but I’m so grateful everything worked out the way it did and am so glad that Wing Jones is my debut novel!

Don’t give up! Keep writing. Becoming a traditionally published author is a magic blend of tenacity, talent, timing, and luck. Keep writing, keep editing, keep reading, keep going. And FINISH your projects. Even if you get midway and think it is awful, try to finish it. Even if you don’t do anything with it, you’ll still have a finished book instead of lots of half-started ones. Make it a priority in your life—nobody else will so you have to carve time out for it. And remember that you write because you love it and because you have stories to tell.

My next book is very different from THE HEARTBEATS OF WING JONES, but hopefully if you enjoy WING you’ll enjoy the new one too. It’s a breakup novel set in Palm Springs, California about a popular girl with family secrets who gets her heart broken by the person she thought she could trust the most. Like WING JONES, it’s about self-discovery, it has a touch of magical realism, and family plays a very big part of the story. Wing Jones, like everyone else in her town, has worshipped her older brother, Marcus, for as long as she can remember. Good-looking, popular, and the star of the football team, Marcus is everything his sister is not.

Until the night everything changes when Marcus, drunk at the wheel after a party, kills two people and barely survives himself. With Marcus now in a coma, Wing is crushed, confused, and angry. She is tormented at school for Marcus’s mistake, haunted at home by her mother and grandmothers’ grief. In addition to all this, Wing is scared that the bank is going to repossess her home because her family can’t afford Marcus’s mounting medical bills.

Every night, unable to sleep, Wing finds herself sneaking out to go to the school’s empty track. When Aaron, Marcus’s best friend, sees her running one night, he recognizes that her speed, skill, and agility could get her a spot on the track team. And better still, an opportunity at a coveted sponsorship from a major athletic gear company. Wing can’t pass up the opportunity to train with her longtime crush and to help her struggling family, but can she handle being thrust out of Marcus’s shadow and into the spotlight? Katherine Webber was born in Southern California in 1987. She has lived in Hong Kong, Hawaii, and Atlanta. She currently lives in London with her husband, Kevin. She loves an adventure, whether it is found in a book or in real life. She has traveled to over 45 countries. Travel, books, and eating out are her favorite indulgences. Katherine studied Comparative Literature at the University of California, Davis and Chinese literature and language at the Chinese University of Hong Kong. She has worked at an international translation company, a technology startup, and, most recently, a London based reading charity. Wing Jones is her first novel. Katherine is represented by Claire Wilson at Rogers, Coleridge and White.

Have you had a chance to read THE HEARTBEATS OF WING JONES yet? Have you considered working with sensitivity readers to help your character development? Do you have some half-finished stories? Why haven't you returned to them? Share your thoughts about the interview in the comments!