Jen Wilde, author of QUEENS OF GEEK, on struggling with her own anxieties

We are so thrilled to have the chance to sit down with Jen Wilde and talk about her latest novel QUEENS OF GEEK. 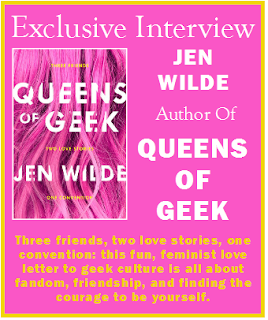 Jen, what scene was really hard for you to write and why, and is that the one of which you are most proud? Or is there another scene you particularly love?

It was hard to write about Taylor’s anxiety, in particular her meltdown, because that has always been a part of myself I struggled with and was ashamed of. I worried that no one would be able to relate to her, but in fact her experience of anxiety has been one of the things that readers have related to the most, which is amazing. That makes me incredibly proud.

I also love the ending with Charlie and Alyssa. No spoilers but let’s just say it still makes me grin like a big dork.

How long did you work on QUEENS OF GEEK?

I spent about two weeks plotting and planning the story, then another month writing it before I submitted it to Swoon Reads. It took a few more months of editing, rewrites and tweaking, plus some last-minute changes, to make it what it is today.

I usually write at home on the couch with a cup of coffee, my laptop and my Spotify playlist. But my hips and back ache if I sit too long so sometimes I’ll switch it up and use my treadmill desk. I’d like to be the cool writer who sits at a coffee shop and writes but I think I’m far too self-conscious and easily distracted for that.

I’m actually working on a few different projects at the moment. One is a rockstar romance, another is a contemporary romance set at a protest, and the other is a romance and horror mix about ghost hunters – all YA. When BFFs Charlie, Taylor and Jamie go to SupaCon, they know it’s going to be a blast. What they don’t expect is for it to change their lives forever.

Charlie likes to stand out. SupaCon is her chance to show fans she’s over her public breakup with co-star, Jason Ryan. When Alyssa Huntington arrives as a surprise guest, it seems Charlie’s long-time crush on her isn’t as one-sided as she thought.

Taylor likes to blend in. Her brain is wired differently, making her fear change. And there’s one thing in her life she knows will never change: her friendship with Jamie—no matter how much she may secretly want it to. But when she hears about the Queen Firestone SupaFan Contest, she starts to rethink her rules on playing it safe.

Jen Wilde is a writer, geek and fangirl with a penchant for coffee, books and pugs. She writes YA stories about zombies (AS THEY RISE), witches (ECHO OF THE WITCH) and fangirls (QUEENS OF GEEK). Her debut series, THE EVA SERIES, reached over three million reads online and became an Amazon bestseller. When not writing, she loves binge-watching her fave shows on Netflix, eating pizza, traveling to far away places and going to conventions in Marty McFly cosplay. Jen lives in a sunny beach-side town in Australia with her husband and their cheeky pug, Heisenberg. She's a twitter addict, so if you want to chat about her stories or geek out about the latest ep of The Walking Dead, Supernatural or Jessica Jones, tweet her.

---
Have you had a chance to read QUEENS OF GEEK yet? Do you connect with Taylor's anxieties? Which character do you connect with most? Which one of Jen's next projects can you not wait to read? Share your thoughts about the interview in the comments!
Happy reading,