Gena Showalter, author of LIFEBLOOD, on the dress rehearsal before real life

We are thrilled to talk with Gena Showalter and have her tell us more about her latest novel LIFEBLOOD. 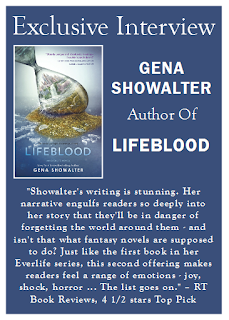 Gena, what was your inspiration for writing LIFEBLOOD?

I love scripture, and there are numerous scriptures about kingdoms not of this earth, kingdom vs. kingdom, a war between spiritual forces-and the power of choice, life and death, blessing and cursing, light and dark, good and evil. Those themes combined and the idea to write a series where life as we know it is just a dress rehearsal and real life actually begins after death—where two opposite realms are in power—was born. Of course, I had to add a forbidden romance to the mix!

My favorite scene in the entire book is a two-page message from Killian to Ten. No one knows if he’s playing her in an effort to win the war or if he’s truly head over heels for her, and it has to stay that way. He has to play both realms in order to appease the powers that be—because he knows whatever he says to Ten will be monitored and dissected by Myriad and Troika. But I digress. In his message, he uses a numbered format—talk about knowing the way to Ten’s heart—but his 10th bullet point is what slays me. Talk about knowing the way to MY heart!

How long did you work on LIFEBLOOD?

Unlike Ten, numbers aren’t my jam. I tend to lose track of days/weeks/months, but I’m going to give this my best guess LOL I think it took me around two and a half months to write the rough draft, another month to do the revisions and then another month or two to do the different rounds of edits. So, I’m going to say it took me 6 months to write, revise and edit LIFEBLOOD

In a nutshell: I work at home, in my office, on my new tread-desk, with music playing in the background. I always have a bottle of water nearby, and dogs snoozing on the floor around me. They love to fart while I work.

Happy to say I’m working on Everlife, the third book in the Everlife series. In this installment, things go from bad to worse for Ten. I can’t really say much more without giving away spoilers for LIFEBLOOD, but do not despair for our girl. It’s always darkest before the dawn. 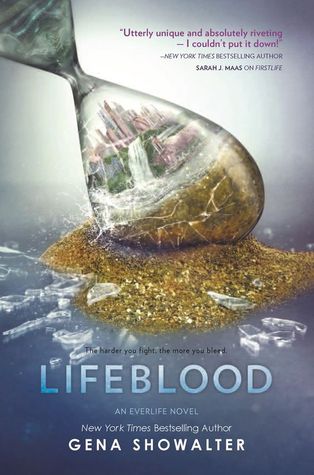 My Firstlife is over, but my Everlife is only now beginning.

With her last living breath, Tenley "Ten" Lockwood made her choice and picked her realm in the Everlife. Now, as the war between Troika and Myriad rages, she must face the consequences.

Because Ten possesses a rare supernatural ability to absorb and share light, the Powers That Be have the highest expectations for her future and the enemy wants her neutralized. Fighting to save her Secondlife, she must learn about her realm from the ground up while launching her first mission: convincing a select group of humans to join her side before they die. No pressure, right?

But Ten's competition is Killian, the boy she can't forget the one who gave up everything for her happiness. He has only one shot at redemption: beating Ten at a game she's never even played. As their throw-downs heat up, so do their undeniable feelings, and soon, Ten will have to make another choice. Love or victory.

Gena Showalter is the New York Times and USA TODAY bestselling author of the Intertwined Novels, the White Rabbit Chronicles, and the Everlife Novels, among numerous novels for an adult audience as well. Her stories have been praised as “unputdownable.” Gena lives in Oklahoma with her family and a menagerie of dogs. Follow her on twitter @genashowalter and visit her website at genashowalter.com.

Have you had a chance to read LIFEBLOOD yet? Did you like the idea of the secret note? Have you played with a similar idea in your writing? What do you hope will happen in the next installment of the Everlife series? Share your thoughts about the interview in the comments!