Casey Griffin, author of SECRETS OF A RELUCTANT PRINCESS, on the difference between writing a book and being a writer

We are excited to have the chance to chat with Casey Griffin about her debut novel SECRETS OF A RELUCTANT PRINCESS. 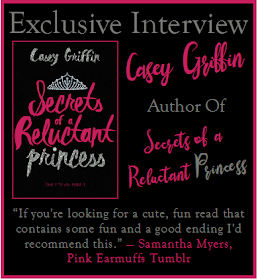 Casey, what was your inspiration for writing SECRETS OF A RELUCTANT PRINCESS?

It all began with a toilet. No, really. An aspiring inventor I knew half-jokingly decided that what the world really needs is a toilet bowl that glows in the dark, preventing the midnight visitor from having to turn on the light.

Apparently something like this already existed, but it got me thinking. What if someone made a fortune off a product like this? We’re talking big toilet money and fame: TV, radio, billboards. Now how embarrassing would it be for their teenage daughter? Embarrassing to her, but hilarious to everyone else. Now have it take over her life, and the Porcelain Princess was born.

My very first novel was a learn-as-you-go project. While that version will never be seen by human eyes again, I’d love to rewrite it some day. My second novel, Dreamcatchers, sent my career down the right path after I entered it into the ABNA Contest and made it to the finals. While I didn’t win, a contest and placing of that significance got me the attention of my agent, Pooja Menon.

Unfortunately, Dreamcatchers came at a time when there was a shift in YA and publishers were being very selective with their fantasy books, so it never got picked up. Call me stubborn, but I wrote two more fantasy / sci-fi based novels. Ironically, just as I was finishing one of them, my agent heard tell that a publisher had bought a book with the exact same premise. What were the chances?

It was then that my agent encouraged me to give contemporary a shot, and I finally found my ‘voice.’ Secrets of a Reluctant Princess was that novel. It was my way of writing contemporary, while still being true to my geeky personality. When it came across an editor’s desk, they loved the ‘voice’ so much that they invited me to write a romance series for them. At that point, I’d been writing for about seven years. Thankfully, Entangled loved SECRETS OF A RELUCTANT PRINCESS, too, and picked it up. And here we are today. The road wasn’t easy, but I knew that the only way I wouldn’t get published was if I gave up.

I think there are a lot of AHA moments on any writer’s path. I don’t think they ever stop because you’re always growing and learning as an artist, but there have definitely been moments that made me stop and take stock of how far I’ve come. Moments like getting that “yes” from my agent, getting my first contract, and it keeps happening with each new book that I complete.

But the first was when I heard that I was a finalist in the ABNA contest. I never would have thought in a million years that I’d advance as far as I did out of five thousand other potential novels.

It was then that I started calling myself a writer. Before then, I just wrote books. Seems like a subtle distinction, but it made all the difference. I began to own the title “writer.” It gave me more confidence, and I think all writers should own it. You aren’t an aspiring writer. If you write, you are a writer. Allow yourself to say it. It’s an empowering thing.

Rituals tend to be steeped in routine, and there’s nothing routine about my life, so the same has to go for my writing. I have a “day” job that keeps me in a remote camp for ten days at a time, working thirteen-hour days. Then I go home to my busy family for ten days.

I have to use every spare moment I can, whether it’s in my room at camp, on the bus to work, or on the plane home. When I get home, my super supportive and understanding partner lets me hide away in my office for hours at a time. If I need a change of scenery, I head to Starbucks or the library.

When I’m getting close to a deadline and it’s crunch time, I become a night owl and work through the night when it’s the most quiet, going to bed when everyone else is waking up. My creativity and focus has always been best at night. And music works great when first conceptualizing a story, but when I’m actually writing, I need silence or else my ears pick up on words in the song and I begin to lose my own.

There’s just not enough time to work on all the projects I’m excited about exploring. There are about twelve novels that I’m desperate to get down on paper right now, both YA and adult. I need to get my hands on Hermione Granger’s time turner. Now that I’ve just finished up the third novel in my Rescue Dog Romance series, I’m writing a proposal for another contemporary teen romance novel (geek couture related, of course). And eventually I’d like to self-publish my Dreamcatcher series, but it all depends on the opportunities that arise in the next couple of years. One thing’s for sure: I’ll be sticking around. At Beverly Hills High, you have to be ruthless to survive…

Adrianna Bottom always wanted to be liked. But this wasn’t exactly what she had in mind. Now, she’s in the spotlight…and out of her geeky comfort zone. She’ll do whatever it takes to turn the rumor mill in her favor—even if it means keeping secrets. So far, it’s working.

Wear the right clothes. Say the right things. Be seen with the right people.

Kevin, the adorable sketch artist who shares her love of all things nerd, isn’t exactly the right people. But that doesn’t stop Adrianna from crushing on him. The only way she can spend time with him is in disguise, as Princess Andy, the masked girl he’s been LARPing with. If he found out who she really was, though, he’d hate her.

The rules have been set. The teams have their players. Game on.

Casey Griffin can often be found at comic conventions on her days off from her day job, driving 400 ton dump trucks in Northern Alberta, Canada. As a jack of all trades with a resume boasting registered nurse, English teacher, and photographer, books are her true passion. Casey is a 2012 Amazon Breakthrough Novel finalist, and is currently busy writing every moment she can.

Have you had a chance to read SECRETS OF A RELUCTANT PRINCESS yet? Do you still refer to yourself as an "aspiring writer"? Have you entered ABNA before? What other contests have you entered that you would encourage others to enter? Share your thoughts about the interview in the comments!