Brendan Reichs, author of NEMESIS, on preferring to write in a tomb

We are delighted to have Brendan Reichs stop by to share more about his shocking thriller NEMESIS. 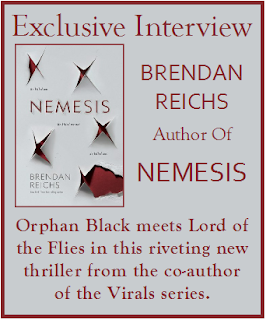 Brendan, what was your inspiration for writing NEMESIS?

I wanted to explore the shock effect of a person dying not once, but many times, but having those deaths basically have no effect. And it’s not magical, or the afterlife, or anything like that. Min and Noah are honestly, truly murdered each time they die on their birthdays. But they simply reset, waking in the woods a mile away from their homes in a remote Idaho vacation town, without a scratch on them. I’ve also always loved conspiracy books, and thrillers, where the reader never knows what to expect next and the antagonists are nuanced and plentiful. That’s what I try to do in Nemesis. I think that, by the end, everything folds in together and the underlying theme of what it means to be alive really comes through. I hope so, anyway!

I use several flashback and transcript scenes throughout the book to relate the previous murders Min and Noah suffered as children. Those scenes could get very hard to write because they are told in first person and try to capture the horror and fear Min and Noah felt on those fateful (and fatal) days. Sometimes they were a little hard to shake off, but the humor I use in the book helped. Tack Russo, Min’s best friend, is a great stress reliever for both Min and me as the author, cutting through the darkness at crucial times. His scenes were my favorite to write because I truly love a smart-ass.

How long did you work on NEMESIS?

Two years. Long years! I needed to get the plot and characters just right. Thankfully, I have a tremendous editor at Putnam in Ari Lewin. I’m really happy with how the book turned out.

That you have to pay attention to every detail, no matter how small. Pull on one loose string and the whole house of cards can come crashing down. You can’t make plot mistakes or assumptions in a thriller or your reader won’t come along with you. But if the characters are wooden, you’re nowhere to begin with.

What do you hope readers will take away from NEMESIS?

First and foremost, I hope they will be entertained. Nemesis is a very quick read that happens at an extremely fast pace. But I hope that my characters will resonate with readers as well. And, obviously, I hope they leave with a burning desire to read the sequel!

I had two ideas that I thought were separate stories, but one day I realized that they were actually two sides of the same coin. That was the final key to unlocking the core idea for my first series, Virals. I wanted to work with forensics but also wanted to write something with a supernatural twist. When I melded those idea the series concept came together rather quickly. The same was later true for the basic story in Nemesis.

Dead silence, at my desktop computer in my office. I like to write in a tomb. The dog can stay.

I am diligently working away on the second draft of the sequel to Nemesis, which will release in 2018. Onward! Orphan Black meets Lord of the Flies in this riveting new thriller from the co-author of the Virals series.

It’s been happening since Min was eight. Every two years, on her birthday, a strange man finds her and murders her in cold blood. But hours later, she wakes up in a clearing just outside her tiny Idaho hometown—alone, unhurt, and with all evidence of the horrifying crime erased.

Across the valley, Noah just wants to be like everyone else. But he’s not. Nightmares of murder and death plague him, though he does his best to hide the signs. But when the world around him begins to spiral toward panic and destruction, Noah discovers that people have been lying to him his whole life. Everything changes in an eye blink.

For the planet has a bigger problem. The Anvil, an enormous asteroid threatening all life on Earth, leaves little room for two troubled teens. Yet on her sixteenth birthday, as she cowers in her bedroom, hoping not to die for the fifth time, Min has had enough. She vows to discover what is happening in Fire Lake and uncovers a lifetime of lies: a vast conspiracy involving the sixty-four students of her sophomore class, one that may be even more sinister than the murders.

Brendan Reichs was born and raised in Charlotte, North Carolina. He graduated from Wake Forest University in 2000 and The George Washington University School of Law in 2006. After three long years working as a litigation attorney, he abandoned the trade to write full time. He lives in Charlotte with his wife, son, daughter, and a herd of animals that tear up everything.

Have you had a chance to read NEMESIS yet? Have you used flashbacks in your writing and did you find it challenging? Have you considered putting two of your stories together before? Share your thoughts about the interview in the comments!