Robin Roe, author of A LIST OF CAGES, on being kind to ourselves

We're excited to have Robin Roe stop by to tell us more about her debut novel A LIST OF CAGES. 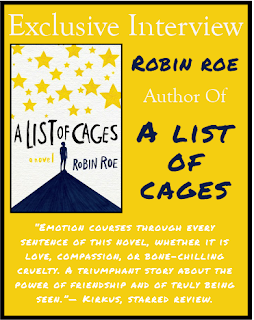 Robin, how long did you work on A LIST OF CAGES?

Adam and Julian’s story came to me in a flood of ideas. One January, I started waking up in the middle of the night, writing everything down as quickly as I could. In a month I’d written 70,000 words, then I spent a year editing what I’d written.

What do you hope readers will take away from A LIST OF CAGES?

I hope people can release shame about experiences that weren’t their fault, and understand things may happen to you, but that doesn’t mean they are you. You can rise above your story.

Every once in a while, I’ll write in public, but it’s such a personal thing for me that I prefer writing alone. I usually start out listening to music, then after a while I turn it off. Before I begin writing, I find that it’s extremely important to journal or meditate or do something to clear my head.

Be kind to yourself! The most inhibiting thing in the world is when we start tearing down our own writing. We need to be willing to do the work, but without judgment or criticism. When Adam Blake lands the best elective ever in his senior year, serving as an aide to the school psychologist, he thinks he's got it made. Sure, it means a lot of sitting around, which isn't easy for a guy with ADHD, but he can't complain, since he gets to spend the period texting all his friends. Then the doctor asks him to track down the troubled freshman who keeps dodging her, and Adam discovers that the boy is Julian--the foster brother he hasn't seen in five years.

Adam is ecstatic to be reunited. At first, Julian seems like the boy he once knew. He's still kind hearted. He still writes stories and loves picture books meant for little kids. But as they spend more time together, Adam realizes that Julian is keeping secrets, like where he hides during the middle of the day, and what's really going on inside his house. Adam is determined to help him, but his involvement could cost both boys their lives. Robin Roe has a bachelor’s degree from Cornell University and a master’s from Harvard. She counseled adolescents in Boston before she moved to Dallas to run a mentoring program for at-risk teens. She later became a high school special education teacher.

Have you had a chance to read A LIST OF CAGES yet? Do you wake up in the middle of the night to write? Are you able to do the work without judgment or criticism? Share your thoughts about the interview in the comments!