Happy Monday! We're featuring some awesome books this week like ALLEGEDLY and AFTER THE FALL! Don't forget to check out all the new releases and comment on which one you can't wait to read below. 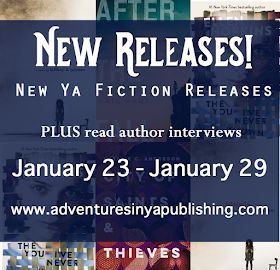 A captivating story about dark truths and heinous crimes as well as unexpected friendships, with detailed black-and-white illustrations throughout. Perfect for fans of mystery and detective stories.

Sally Jones is not only a loyal friend, she s an extraordinary individual. In overalls or in a maharaja's turban, this unique gorilla moves among humans without speaking, but understanding everything. She and the Chief are devoted comrades who operate a cargo boat. A job they are offered pays big bucks, but the deal ends badly, and the Chief is falsely convicted of murder.

For Sally Jones, this is the start of a harrowing quest for survival and to clear the Chief's name. Powerful forces are working against her, and they will do anything to protect their secrets.

Author Question: What is your favorite thing about The Murderer's Ape?

When working on a book, I see not only the characters and the plot, but also the illustrations, the layout, the format - even what typeface to use! The book is for me a whole, in which every part must work together to create the feeling I am looking for. Therefore it is not easy to point out any one favourite thing. But if I had to choose, I would probably say the intrigue. How do you live your life if your past is based on a lie? A new novel in both verse and prose from #1 New York Times bestselling author, Ellen Hopkins.

Arielle’s life is a blur of new apartments, new schools, and new faces. Since her mother abandoned the family, Arielle has lived nomadically with her father as he moves from job to job. All she’s ever wanted is to stay in one place for an entire school year, and it looks like she might finally get her wish. With a real friend, Monica, who might be even more than a friend soon, things are starting to look up.

But Arielle’s life is upended—and not by her father, but by her mom, who reveals that she never left Arielle. Instead, Arielle’s father kidnapped her, and her mom has been left searching ever since. She wants to take Arielle away, but Arielle has no connection with her mother, and despite everything, still loves her father. How can she choose between the mother she’s been taught to mistrust and the father who sewed that suspicion?

Author Question: What is your favorite thing about The You I've Never Known?

THE YOU I’VE NEVER KNOWN (note the multi-word title!) is a rebranding of sorts, with a new cover design that we hope will attract new readers to my publishing fold. It’s also written in both verse and prose, with the two alternating viewpoints each claiming one format. I enjoyed challenging myself and my readers with the dual format, and also love the little twist at the very end. Plus, there’s a personal thread that’s important to me. After the Fall
by Kate Hart
Hardcover
Farrar, Straus and Giroux
Released 1/24/2017

Seventeen-year-old Raychel is sleeping with two boys: her overachieving best friend Matt … and his slacker brother, Andrew. Raychel sneaks into Matt’s bed after nightmares, but nothing ever happens. He doesn’t even seem to realize she’s a girl, except when he decides she needs rescuing. But Raychel doesn't want to be his girl anyway. She just needs his support as she deals with the classmate who assaulted her, the constant threat of her family’s eviction, and the dream of college slipping quickly out of reach. Matt tries to help, but he doesn’t really get it … and he’d never understand why she’s fallen into a secret relationship with his brother. The friendships are a precarious balance, and when tragedy strikes, everything falls apart. Raychel has to decide which pieces she can pick up – and which ones are worth putting back together. Mary B. Addison killed a baby.

Allegedly. She didn’t say much in that first interview with detectives, and the media filled in the only blanks that mattered: A white baby had died while under the care of a church-going black woman and her nine-year-old daughter. The public convicted Mary and the jury made it official. But did she do it? She wouldn’t say.

Mary survived six years in baby jail before being dumped in a group home. The house isn’t really “home”—no place where you fear for your life can be considered a home. Home is Ted, who she meets on assignment at a nursing home.

There wasn’t a point to setting the record straight before, but now she’s got Ted—and their unborn child—to think about. When the state threatens to take her baby, Mary must find the voice to fight her past. And her fate lies in the hands of the one person she distrusts the most: her Momma. No one knows the real Momma. But who really knows the real Mary?

In this gritty and haunting debut, Tiffany D. Jackson explores the grey areas in our understanding of justice, family, and truth, and acknowledges the light and darkness alive in all of us. The Girl with the Dragon Tattoo meets Gone Girl in this enthralling YA murder mystery set in Kenya.

In the shadows of Sangui City, there lives a girl who doesn't exist. After fleeing the Congo as refugees, Tina and her mother arrived in Kenya looking for the chance to build a new life and home. Her mother quickly found work as a maid for a prominent family, headed by Roland Greyhill, one of the city’s most respected business leaders. But Tina soon learns that the Greyhill fortune was made from a life of corruption and crime. So when her mother is found shot to death in Mr. Greyhill's personal study, she knows exactly who’s behind it.

With revenge always on her mind, Tina spends the next four years surviving on the streets alone, working as a master thief for the Goondas, Sangui City’s local gang. It’s a job for the Goondas that finally brings Tina back to the Greyhill estate, giving her the chance for vengeance she’s been waiting for. But as soon as she steps inside the lavish home, she’s overtaken by the pain of old wounds and the pull of past friendships, setting into motion a dangerous cascade of events that could, at any moment, cost Tina her life. But finally uncovering the incredible truth about who killed her mother—and why—keeps her holding on in this fast-paced nail-biting thriller.