Happy Monday! We're giving away five copies of Eric Walters novel FIGHT FOR POWER to celebrate the release of the next book in the series WILL TO SURVIVE. We're also featuring some awesome books this week like Adam Silvera's latest, HISTORY IS ALL YOU LEFT ME! Don't forget to check out all the new releases and enter below to win. 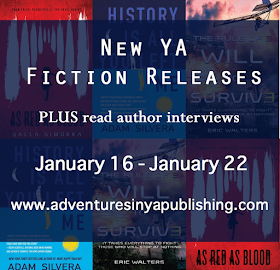 The Rule of Three: Will to Survive
by Eric Walters
Giveaway of five hardcovers of previous book Fight for Power
U.S. Only
Square Fish
Released 1/17/2017

Will to Survive is the gripping conclusion to the acclaimed Rule of Three trilogy from Eric Walters about one suburban neighborhood's existence after a global blackout.

Teenager Adam Daley has killed again. It had to be done, part of him knows that, but murder changes a person. It can certainly change a kid who's already grown up too quickly, too harshly, in the wake of the catastrophic global shutdown four months ago. In the name of safety and survival, Adam and his neighbors have turned their middle American community into a fortress, defending against countless enemies. But what's lurking in the dark is a greater danger than ever before: somebody who wants to destroy the neighborhood and Adam at any cost.

Soon, the hunted will have to become the hunter . . . and Adam hates himself for what he will have to do. Because sometimes even the dark is not cover enough for things that would never happen in the light. The Girl with the Dragon Tattoo for teens—this international bestseller is a thrilling, edge-of-your-seat Nordic noir that chills to the bone, and not just because of the bleak winter setting.

Lumikki Andersson has made it a rule to stay out of things that do not involve her. She knows all too well that trouble comes to those who stick their nose where it doesn’t belong. But Lumikki’s rule is put to the test when she uncovers thousands of washed Euro notes hung to dry in her school’s darkroom and three of her classmates with blood on their hands. Literally.

A web of lies and deception now has Lumikki on the run from those determined to get the money back—no matter the cost. At the center of the chaos: Polar Bear, the mythical drug lord who has managed to remain anonymous despite hosting lavish parties and having a notorious reputation. If Lumikki hopes to make it out alive, she’ll have to uncover the entire operation.

Even the cold Finnish winter can’t hide a culprit determined to stain the streets red.

Author Question: What is your favorite thing about As Red as Blood?

My favorite thing are the little fairy tale elements you can find in this thriller if you are familiar with classical fairy tales. And also coffee. Because I think I have this in common with Lorelai Gilmore: "I believe, in former life, I WAS coffee." OCD-afflicted Griffin has just lost his first love, Theo, in a drowning accident. In an attempt to hold onto every piece of the past, he forges a friendship with Theo's last boyfriend, Jackson. When Jackson begins to exhibit signs of guilt, Griffin suspects he's hiding something, and will stop at nothing to get to the truth about Theo's death. But as the grieving pair grows closer, readers will question Griffin's own version of the truth both in terms of what he's willing to hide and what true love means.