Happy Monday! 2017 is continuing to be bookish, with two new giveaways and many more new releases to feature! Don't forget to check out all the new releases and enter below to win. 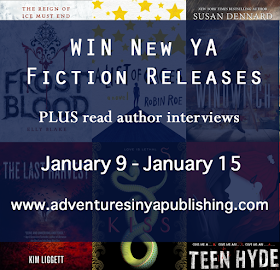 Seventeen-year-old Ruby is a fireblood who must hide her powers of heat and flame from the cruel frostblood ruling class that wants to destroy all that are left of her kind. So when her mother is killed for protecting her and rebel frostbloods demand her help to kill their rampaging king, she agrees. But Ruby's powers are unpredictable, and she's not sure she's willing to let the rebels and an infuriating (yet irresistible) young man called Arcus use her as their weapon.

All she wants is revenge, but before they can take action, Ruby is captured and forced to take part in the king's tournaments that pit fireblood prisoners against frostblood champions. Now she has only one chance to destroy the maniacal ruler who has taken everything from her and from the icy young man she has come to love.

Fast-paced and compelling, Frostblood is the first in a page-turning new young adult three-book series about a world where flame and ice are mortal enemies—but together create a power that could change everything.

Author Question: What is your favorite thing about Frostblood?

My favorite aspect of FROSTBLOOD is the meeting and clashing and unexpected harmony of opposites. Firebloods and Frostbloods are complete opposites in elemental terms, but their common humanity makes their similarities greater than their differences. However, they have a history of violent conflicts, which means they don’t necessarily see things that way.

The heroine, Ruby, is a Fireblood who has lost a great deal because of a corrupt Frostblood king. She’s confronted with an opportunity early in the story, but in order to take advantage of it she has to decide to trust two Frostblood strangers. That tentative trust turns out to be the basis for her own growth and acceptance of her Fireblood powers. I also think the romantic parts of the book are made more poignant by the opposing natures of the two characters. I hope readers will think so, too! “I plead the blood.”

Those were the last words seventeen-year-old golden boy quarterback Clay Tate heard rattling from his dad's throat when he discovered him dying on the barn floor of the Neely Cattle Ranch, clutching a crucifix to his chest.

Now, on the first anniversary of the slaughter, the whole town's looking at Clay like he might be next to go over the edge. Clay wants to forget the past, but the sons and daughters of the Preservation Society—a group of prominent farmers his dad accused of devil worship—won't leave him alone. Including Ali, his longtime crush, who suddenly wants to reignite their romance after a year of silence, and hated rival Tyler Neely, who’s behaving like they’re old friends.

Even as Clay tries to reassure himself, creepy glances turn to sinister stares and strange coincidences build to gruesome rituals—but when he can never prove that any of it happened, Clay worries he might be following his dad down the path to insanity...or that something far more terrifying lies in wait around the corner.

Author Question: What is your favorite thing about The Last Harvest?

Clay Tate. My MC. He’s the strong silent type, caught in a horrific web of grief, deceit and devil worship. It’s nerve wracking and heartbreaking, watching him fight against forces way beyond his control.


Because of the Sun by Jenny Torres Sanchez: Tiffany E.
Life in a Fishbowl by Len Vlahos: Yolande B.
The Truth of Right Now by Kara Lee Corthron: Gianna J. When Adam Blake lands the best elective ever in his senior year, serving as an aide to the school psychologist, he thinks he's got it made. Sure, it means a lot of sitting around, which isn't easy for a guy with ADHD, but he can't complain, since he gets to spend the period texting all his friends. Then the doctor asks him to track down the troubled freshman who keeps dodging her, and Adam discovers that the boy is Julian--the foster brother he hasn't seen in five years.

Adam is ecstatic to be reunited. At first, Julian seems like the boy he once knew. He's still kind hearted. He still writes stories and loves picture books meant for little kids. But as they spend more time together, Adam realizes that Julian is keeping secrets, like where he hides during the middle of the day, and what's really going on inside his house. Adam is determined to help him, but his involvement could cost both boys their lives.

Author Question: What is your favorite thing about A List of Cages?

That would have to be the bond between Julian and Adam. As I was writing this novel, I began to understand authors who create series following the same characters. I became so attached to these boys, and they feel incredibly real for me. Writing A LIST OF CAGES felt less like generating a story and more like transcribing—as if I was tuned into their lives. A teenage assassin kills with a single kiss until she is ordered to kill the one boy she loves. This commercial YA fantasy is romantic and addictive—like a poison kiss—and will thrill fans of Sarah J. Maas and Victoria Aveyard.

Marinda has kissed dozens of boys. They all die afterward. It's a miserable life, but being a visha kanya—a poison maiden—is what she was created to do. Marinda serves the Raja by dispatching his enemies with only her lips as a weapon.

Until now, the men she was ordered to kiss have been strangers, enemies of the kingdom. Then she receives orders to kiss Deven, a boy she knows too well to be convinced he needs to die. She begins to question who she's really working for. And that is a thread that, once pulled, will unravel more than she can afford to lose.

This rich, surprising, and accessible debut is based in Indian folklore and delivers a story that will keep readers on the edge of their seats.

Author Question: What is your favorite thing about Poison's Kiss?

I loved getting to explore different relationships in POISON’S KISS—not just romantic relationships (though that was a lot of fun!) —but relationships between siblings, between rivals, between friends. Marinda’s life is complicated and her interactions with the people in her life are far from straightforward. But it’s that complexity—that tension that exists when people serve two opposing roles in her life—that provides the beating heart of the book. High school meets classic horror in this YA contemporary twist on Robert Louis Stevenson's The Strange Case of Dr. Jekyll and Mr. Hyde.

Head Cheerleader Cassidy Hyde’s life should have been perfect. But it really, really wasn’t, and she’s about ready to give up and disappear. Until the first time she takes Sunshine. This new experimental drug makes Cassidy feel like the perfect, golden girl once again. A little memory loss seems like a small price to pay to get her life back . . . at least until boys start to go missing . . . boys that Cassidy NEVER wanted to think of again . . .

Author Question: What is your favorite thing about Teen Hyde?

I love the ending! Endings are something that I constantly worry about as a writer. I usually go back and forth throughout the process of writing a novel searching for the perfect ending, but not this time! The climax and denouement of TEEN HYDE were firmly in my head from the beginning and I was absolutely dying to write them. I find both the climax and the final few words of the book very satisfying. It's the type of ending that as a reader I adore. And I really can't say anything other than that without being spoiler-y, but YES. So. Much. Fun. Kendra first beheld James over three hundred years ago. Since then, she’s tangled with witch hunters and wolves, helped a miller’s daughter spin straw into gold, cowered in London as bombs fell, and lived through who knows how many shipwrecks.

Being a powerful witch, she has survived it all. But immortality can be lonely. Kendra isn’t ready to stop searching for the warlock she had met centuries ago. With the help of her magic mirror, Kendra will travel the world to reconnect with her lost love—and, of course, she can’t help but play a hand in a few more stories along the way.

Featuring retellings of Little Red Riding Hood, Rumpelstiltskin, East of the Sun and West of the Moon, and The Ugly Duckling, Alex Flinn’s latest young adult novel, Beheld, is fresh fairy-tale fun from beginning to end. From critically acclaimed author Jeannine Atkins comes a gorgeous, haunting biographical novel in verse about a half Native American, half African American sculptor working in the years following the Civil War.

A sculptor of historical figures starts with givens but creates her own vision. Edmonia Lewis was just such a sculptor, but she never spoke or wrote much about her past, and the stories that have come down through time are often vague or contradictory. Some facts are known: Edmonia was the daughter of an Ojibwe woman and an African-Haitian man. She had the rare opportunity to study art at Oberlin, one of the first schools to admit women and people of color, but lost her place after being accused of poisoning and theft, despite being acquitted of both. She moved to Boston and eventually Italy, where she became a successful sculptor.

But the historical record is very thin. The open questions about Edmonia’s life seem ideally suited to verse, a form that is comfortable with mysteries. Inspired by both the facts and the gaps in history, author Jeannine Atkins imagines her way into a vision of what might have been. The follow-up to New York Times bestselling Truthwitch, next in a breathtaking YA fantasy series hailed by Alexandra Bracken as "a world you will want to inhabit forever."

On a continent ruled by three empires, some are born with a "witchery," a magical skill that sets them apart from others.

In this follow-up to New York Times bestselling Truthwitch, a shadow man haunts the Nubrevnan streets, leaving corpses in his wake—and then raising those corpses from the dead. Windwitch continues the tale of Merik—cunning privateer, prince, and windwitch. Seventeen-year-old Reagan Elizabeth Hillis is used to changing identities overnight, lying to every friend she’s ever had, and pushing away anyone who gets too close. Trained in mortal combat and weaponry her entire life, Reagan is expected to follow in her parents’ footsteps and join the ranks of the most powerful top-secret agency in the world, the Black Angels. Falling in love with the boy next door was never part of the plan.

Now Reagan has to decide: Will she use her incredible talents and lead the dangerous life she was born into, or throw it all away to follow her heart and embrace the normal life she's always wanted? And does she even have a choice at all?

Find out if you are ready to join the Black Angels in the captivating and emotional page-turner, You Don't Know My Name, from debut novelist Kristen Orlando!