Len Vlahos, author of LIFE IN A FISHBOWL, on trying to get the voice right

We're thrilled to have Len Vlahos with us to share more about his latest novel LIFE IN A FISHBOWL. 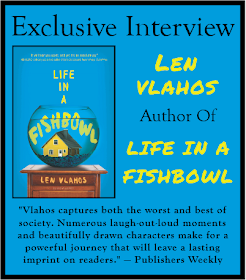 Len, what was your inspiration for writing LIFE IN A FISHBOWL?

I saw an article online about a Dutch man who put his life for sale on eBay. Not his actual life, but all of his possessions. He had just gone through a painful divorce and wanted to start again. His listing said something to the effect of “you get my house, my car, and my cat. Even my friends will be nice to you.” (Or something like that.) So, I thought, what would happen if someone auctioned their actual life online (do with me as you please -- murder, torture, polite conversation) and what would drive them to do so?

My favorite scene in the book is one in which Glio — the anthropomorphized brain tumor — explores the hidden recesses of Jackie’s father’s brain. Here’s one paragraph from it.


He paddled through unchartered lakes and canals, devouring schools of thought that defied category or explanation, existing like the dark matter of the universe, heavier and with more gravity than could ever be seen, heard, smelled, tasted, touched, or realized. It was pi to the 4,790,523rd digit, the complete understanding of the human genome, and the one true meaning of love. These were the thoughts, ideas, and truths that formed the background hum of humanity, the music all people heard without knowing it. It was the fuel of desire, ambition, and curiosity. And, cell by cell, Jared Stone was losing it all.

The was the first novel I wrote in the third person and with an ensemble cast. That was both more difficult and liberating. When writing a strong first person narrative — as I hope I did with The Scar Boys — you are limited by the thoughts, feelings, and observations of the narrator. You can’t really jump around as much in time, space, and perspective. At the same time, trying to get the voice right when writing in the third person is more complicated. For example, in LiaFB, one of the characters is a nun. Even though the narrator is dispassionate, I had to make very specific and conscious language choices when writing sections with Sister Benedict; I needed her to feel real.

What do you hope readers will take away from LIFE IN A FISHBOWL?

I hope readers will identify with Jackie and recognize the reality of having to act on your behalf — or on behalf of a loved one — when no one else can or will. I also hope they’ll think about how perverse our media can be, and yes, that they’ll think about euthanasia and what it means. (Phew, that all sound kind of heavy for a book that’s kind of a dark comedy, or at least a tragicomedy!)

Write everyday. Read everyday. And when you’re working on a first draft, keep moving forward. You can edit and rewrite to your heart’s content — and you should — only after you type THE END. Fifteen-year-old Jackie Stone is a prisoner in her own house. Everything she says and does 24/7 is being taped and broadcast to every television in America. Why? Because her dad is dying of a brain tumor and he has auctioned his life on eBay to the highest bidder: a ruthless TV reality show executive at ATN.

Gone is her mom's attention and cooking and parent-teacher conferences. Gone is her sister's trust ever since she's been dazzled by the cameras and new-found infamy. Gone is her privacy. Gone is the whole family's dignity as ATN twists their words and makes a public mockery of their lives on Life and Death. But most of all, Jackie fears that one day very soon her father will just be . . . gone. Armed only with her ingenuity and the power of the internet, Jackie is determined to end the show and reclaim all of their lives, even in death.

Told through multiple points of view--including her dad's tumor--acclaimed author Len Vlahos deftly explores what it really means to live in this brilliantly written tragicomedy. 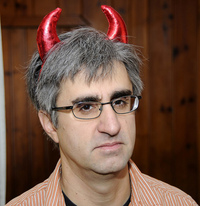 Len Vlahos dropped out of NYU film school in the mid 80s to play guitar and write songs for Woofing Cookies. The band broke up in 1987 and he followed his other passion, books. He has worked in the book industry ever since. And, of course, he writes.

He lives in Connecticut with his super awesome wife Kristen, and our six year old son Charlie, and three and a half year old son, Luke, and he spends his days working at a small book industry non profit.

Have you had a chance to read LIFE IN A FISHBOWL yet? Have you been inspired by an item for sale on eBay? Do you find writing in third person more difficult and liberating than first? Share your thoughts about the interview in the comments!