Jenny Torres Sanchez, author of BECAUSE OF THE SUN, on following bizarre moments

We're excited to have Jenny Torres Sanchez here to tell us more about her latest novel BECAUSE OF THE SUN. 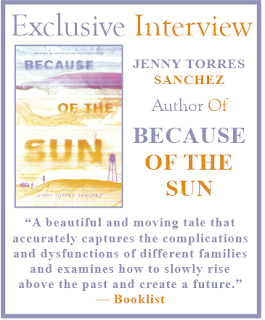 Jenny, what did this book teach you about writing or about yourself?

I think I learned to take more risks. And to trust myself and the story more. As I wrote, there were a lot of times that I wondered, What is going on here? Why is this dead bear suddenly showing up and haunting this character? But I followed the story, kept writing it the way it came to me. I knew I had to follow these bizarre moments and just trust it would make sense in the end, but it was still scary. I mean, I really didn’t know how it would go over when I was done. I was terrified when I finished and sent it off to my agent, but also really excited.


My first bit of advice is always to write. Just write. Simple advice. Writing is hard, a lot of times it sucks, and there is no short cut or easy way to do it, but you just have to do it. Just. Write.

My second bit of advice is to stay true to your story. I think if you force a certain story line or come to the page with some kind of motive, you lose the story. You end up manipulating it too much and something is lost in that. For me anyway. I know all writers have a different process. But I do think you can get in the way of the story that wants to be told if you don’t stay open to what it wants to be. So see what it is. Let the story and characters unravel the way they’re going to unravel. Figure out what it’s about at the end, it will always show you.

And then edit the hell out of it, because all that unraveling is a mess, too.

I’m working on my next book, CROWS CRY EMILIA, about a girl who comes undone after finding out the man arrested and imprisoned for viciously attacking her on a school playground years ago was not the right guy. It deals with senseless tragedy, the lasting effects of trauma, family, and what it means to move past tragedy. It’s due out next year. From the backyards of suburban Florida to the parched desert of New Mexico, Because of the Sun explores the complexity of family, the saving grace of friendship, and the healing that can begin when the truth is brought to light.

Dani Falls learned to tolerate her existence in suburban Florida with her brash and seemingly unloving mother by embracing the philosophy Why care? It will only hurt. So when her mother is killed in a sudden and violent manner, Dani goes into an even deeper protection mode, total numbness. It’s the only way she can go on.

But when Dani chooses The Stranger by Albert Camus as summer reading for school, it feels like fate. The main character’s alienation after his mother’s death mirrors her own.

Dani’s life is thrown into further turmoil when she is sent to New Mexico to live with an aunt she never knew she had. The awkwardness between them is palpable. To escape, Dani takes long walks in the merciless heat. One day, she meets Paulo, who understands how much Dani is hurting. Although she is hesitant at first, a mutual trust and affection develop between Dani and Paulo, and Dani begins to heal. And as she and her aunt begin to connect, Dani learns about her mother’s past. Forgiving isn’t easy, but maybe it’s the only way to move forward.

JENNY TORRES SANCHEZ is a full-time writer and former English teacher. She was born in Brooklyn, New York, but has lived on the border of two worlds her whole life. She lives in Orlando, Florida, with her husband and children.

Have you had a chance to read BECAUSE OF THE SUN yet? Do you trust yourself and the story? Do you let the story and characters unravel the way they’re going to unravel? Share your thoughts about the interview in the comments!