Jakob Wegelius, author of THE MURDERER'S APE, on not talking about ideas beforehand

We're delighted to have Jakob Wegelius here to talk with us about his latest novel THE MURDERER'S APE. 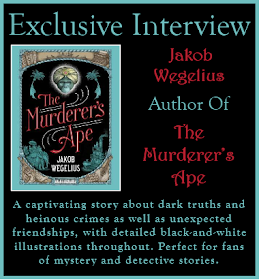 Jakob, what was your inspiration for writing THE MURDERER'S APE?

My first inspiration for writing about Sally Jones was old songs, sung by seamen long ago. These songs are adventurous, and often tell a colorful story of some unfortunate sailor’s life and travels.

How long did you work on THE MURDERER'S APE?

I started working on the book in 2008 and it was published in Sweden in 2014. But I didn’t work exclusively on The Murderer’s Ape during these years.

I always carry with me a notebook, where I can scribble down ideas when they come to me. Most of the actual writing I do at home, but most of all I like to write when I am traveling, preferably by train. If people around me are talking loud, I put my earphones on and listen to Bach.

When I draw, I usually listen to audiobooks at the same time. The combination is unbeatable!

One thing that is important for me, is not to talk about my ideas and writing plans too much beforehand. For some reason that makes writing much harder for me.

I am building a garage, which is great fun! (I am also writing on a story, but I can’t say much more about it, not yet ...) A captivating story about dark truths and heinous crimes as well as unexpected friendships, with detailed black-and-white illustrations throughout. Perfect for fans of mystery and detective stories.

Sally Jones is not only a loyal friend, she s an extraordinary individual. In overalls or in a maharaja's turban, this unique gorilla moves among humans without speaking, but understanding everything. She and the Chief are devoted comrades who operate a cargo boat. A job they are offered pays big bucks, but the deal ends badly, and the Chief is falsely convicted of murder.

For Sally Jones, this is the start of a harrowing quest for survival and to clear the Chief's name. Powerful forces are working against her, and they will do anything to protect their secrets.

JAKOB WEGELIUS is a Swedish writer and illustrator who lives and works in the small village of Mörtfors. In Sweden, he was awarded the August Prize for Best Children’s Book and the Nordic Council Children and Young People’s Literature Prize for The Murderer’s Ape, which is also an International Youth Library White Raven selection. Visit Jakob at jakobwegelius.com.

Have you had a chance to read THE MURDERER'S APE yet? Have old songs inspired you to write a story? Do you like to write while traveling? Share your thoughts about the interview in the comments!