Elly Blake, author of FROSTBLOOD, on not underestimating your potential

We're delighted to have Elly Blake with us to share more about her debut novel FROSTBLOOD. 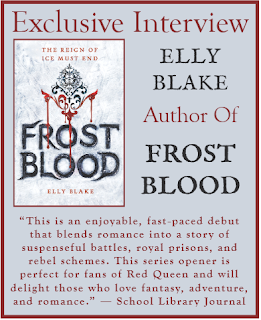 Elly, what was your inspiration for writing FROSTBLOOD?

I love elemental magic, and that’s probably what led to me having a dream about my heroine, a girl with power over fire and a king with an icy heart. (I’d also watched Avatar: the Last Airbender a few months before, so I’m sure that had something to do with it.) When I started working on the concept, I knew I wanted to focus on two elements: frost and fire.

The very first scene in the book was the hardest to write. That scene, which is when the soldiers attack the village, was actually not in the early drafts. When I was drafting, I shied away from writing that scene because it’s a painful moment to write about and, I think, to read. My agent felt that traumatic event needed to happen on the page, so I wrote it, and realized how vital it was. It’s the defining moment of Ruby’s life and motivates her later actions.

I love writing action scenes, but I’m most proud of the more intimate scenes between characters, the little emotional moments that hopefully resonate and inspire similar feelings in the reader. There’s one scene that ends with Ruby’s tears sizzling as they hit the ground, and I’m really fond of that scene.

I hope anyone who loves YA fantasy would enjoy FROSTBLOOD, but if I had to pick two books, I’d say the Throne of Glass series by Sarah J. Maas and Red Queen by Victoria Aveyard.

How long did you work on FROSTBLOOD?

I started drafting in January or February of 2014, then took some breaks when I was stuck on plot, and then ended up rewriting most of the second half over that summer. Then the manuscript made it into the contest Pitch Wars that fall. My Pitch Wars mentor and I worked on revisions over a two-month period and I completed the revised book on October 31, 2014. I signed with Suzie, my agent, in November of 2014 and did further work on it. It went through many more revisions after that, so I’d have to include another year as part of the revision process (mostly because I was still learning how to revise and I took forever). The book sold in the US and UK in the fall of 2015.

I learned that I am mostly a pantster who wishes I were a plotter. (Though I do outline a bit, and I use plotting tools during revisions.) I have to let my unconscious do most of the drafting. If I try to fight that and plot too much ahead of time, it leads to paralysis. Tons of rewriting is just part of my process, which I’m coming to accept.

What do you hope readers will take away from FROSTBLOOD?

I hope it’s a fun, gripping, enjoyable read and they want more of the characters and the world!

I think I have about 7 or 8 incomplete manuscripts. Though I’d dreamed of writing fiction for many years, I didn’t start seriously pursuing publication until 2011. It took me until 2014 to actually finish a book. Before completing FROSTBLOOD, I had a habit of starting projects and abandoning them.

Was there an AHA! moment along your road to publication where something suddenly sank in and you felt you had the key to writing a novel? What was it?
There were so many pivotal moments that kept me going, but there’s one in particular that helped me finish FROSTBLOOD after years of not completing any of my previous manuscripts. In March 2014, I attended a critique session at my local RWA chapter. Morgan Rhodes was mentoring the YA critique table and she read the first 5 pages of FROSTBLOOD. She rolled up the pages, hit me over the head with them, and said, “Finish it!” (She and Eve Silver had encouraged me to finish a previous manuscript and I hadn’t because I had no idea how yet! lol) I’m glad I finally finished something. 😀

To quote Tessa Dare, “Every writing session begins with a panic attack.” It takes me a while to get past my anxiety. Some days are worse than others, of course. But once I get going, I write at an adjustable desk in my basement office. (It used to be my husband’s office but he gave it to me a few months ago so I can shut out the world and write.) I listen to music but it has to be instrumental only. Usually movie soundtracks. I’ve tried to work in coffee shops but if conversations are too loud, I find it distracting.

I’d say, don’t underestimate your potential. With hard work, you can always improve and with dedication you’ll amaze yourself. If writing is a secret dream, try it, even if you don’t think you can. The writing community is amazing and you will meet the best people on your journey.

I’m frantically finishing up edits for Fireblood, Book 2 in the Frostblood Saga, which will be published in September 2017.

Seventeen-year-old Ruby is a fireblood who must hide her powers of heat and flame from the cruel frostblood ruling class that wants to destroy all that are left of her kind. So when her mother is killed for protecting her and rebel frostbloods demand her help to kill their rampaging king, she agrees. But Ruby's powers are unpredictable, and she's not sure she's willing to let the rebels and an infuriating (yet irresistible) young man called Arcus use her as their weapon.

All she wants is revenge, but before they can take action, Ruby is captured and forced to take part in the king's tournaments that pit fireblood prisoners against frostblood champions. Now she has only one chance to destroy the maniacal ruler who has taken everything from her and from the icy young man she has come to love.

Fast-paced and compelling, Frostblood is the first in a page-turning new young adult three-book series about a world where flame and ice are mortal enemies—but together create a power that could change everything.

Elly Blake loves fairy tales, old houses, and owls. After earning a BA in English literature, she held a series of seemingly random jobs, including project manager, customs clerk, graphic designer, reporter for a local business magazine, and library assistant. She lives in Southwestern Ontario with her husband, kids and a Siberian Husky mix who definitely shows Frostblood tendencies.

Have you had a chance to read FROSTBLOOD yet? Have you shied away from writing a scene because it was painful? Do you find that every writing session begins with a panic attack? Share your thoughts about the interview in the comments!