Ellen Hopkins, author of THE YOU I'VE NEVER KNOWN, on honesty being the key

We're thrilled to have Ellen Hopkins join us to share more about her latest novel THE YOU I'VE NEVER KNOWN. 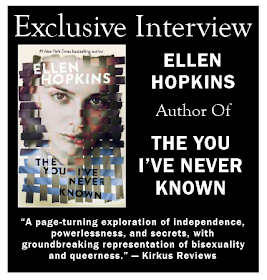 Ellen, what was your inspiration for writing THE YOU I'VE NEVER KNOWN?

When my younger daughter was three years old, my ex kidnapped her out of daycare and I lost her for three years. It’s something I’ve wanted to write about, but the time had to be right, and the story had to be far enough removed from real life to allow me the perspective I needed. Reconnecting was difficult after only three years, so it struck me how hard it would be to reconnect after losing her entire childhood, into almost-adulthood.

The hardest scenes to write were the gaslighting scenes because as someone who spent way too much time being gaslighted by a man very much like Ariel’s father, they brought back terrible memories. Still, it’s something we need to teach our children about so they can understand what’s at stake when it happens to them.

How long did you work on THE YOU I'VE NEVER KNOWN?

This one took longer than most, at a little over a year. But that period, and the year preceding it, was a time of personal unrest. I didn’t write at all for six months, something that was truly frightening. It was, like, what if I can’t ever write again? I'd sit and try, but there were way too many distractions to allow deep immersion into story and character.

I learned that, even if I have to take a writing hiatus in order to to find my way again, I’m a writer at heart. While the head might interfere sometimes, eventually the heart wins out.

What do you hope readers will take away from THE YOU I'VE NEVER KNOWN?

How much damage a lie can do. Even little lies tend to compound. Huge lies can devastate lives.

My way in was journalism. I was a freelancer for many, many years. Some of the stories I wrote seemed to demand more in-depth telling, so I moved them into children’s nonfiction books, and published twenty before I attempted fiction. I was always writing poetry and short stories to stroke my more creative side, however. When I settled into children’s publishing, I tried my hand at picture books (definitely not my strong suit!) and middle grade fiction, with little success. It was when I found the story I couldn’t NOT tell (CRANK) that I realized I belonged in YA.

My first published novel, Crank, was a book I couldn’t not write. The story was inspired by a personal story, one I knew would be valuable for a young adult audience, though I’d not considered writing YA up until that point. The key was truth. My earlier attempts at (adult) fiction were way too contrived. Honesty was the key.

To write stories that matter, and to write them fearlessly, without thinking about reviews or awards or monetary gain. The stories that speak to your heart will resonate with readers. And without readers, the other stuff doesn’t happen anyway.

I just started the 2018 YA, which addresses gun violence, in a very different way. Won’t give too many details because I want it to be a surprising book, but I can tell you it’s written in third person omniscient, with an unusual narrator. How do you live your life if your past is based on a lie? A new novel in both verse and prose from #1 New York Times bestselling author, Ellen Hopkins.

Arielle’s life is a blur of new apartments, new schools, and new faces. Since her mother abandoned the family, Arielle has lived nomadically with her father as he moves from job to job. All she’s ever wanted is to stay in one place for an entire school year, and it looks like she might finally get her wish. With a real friend, Monica, who might be even more than a friend soon, things are starting to look up.

But Arielle’s life is upended—and not by her father, but by her mom, who reveals that she never left Arielle. Instead, Arielle’s father kidnapped her, and her mom has been left searching ever since. She wants to take Arielle away, but Arielle has no connection with her mother, and despite everything, still loves her father. How can she choose between the mother she’s been taught to mistrust and the father who sewed that suspicion?

Ellen Hopkins is the #1 New York Times bestselling author of eleven young adult novels, as well as the adult novels Triangles, Collateral, and Love Lies Beneath. She lives with her family in Carson City, Nevada, where she has founded Ventana Sierra, a nonprofit youth housing and resource initiative. Visit her at EllenHopkins.com and on Facebook, and follow her on Twitter at @EllenHopkinsLit.

Have you had a chance to read THE YOU I'VE NEVER KNOWN yet? Do you write fearlessly? Do you write stories that speak to your heart? Share your thoughts about the interview in the comments!