Chandler Baker, author of TEEN HYDE, on being hopped up on pregnancy hormones

We're delighted to have Chandler Baker with us to share more about her latest novel TEEN HYDE. 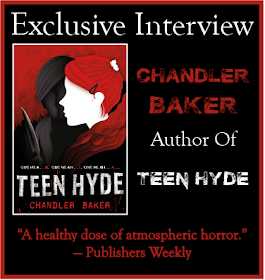 Chandler, how long did you work on TEEN HYDE?

Writing TEEN HYDE was hands down the easiest experience I had while writing a book. There is tough material in these pages for certain and those required sensitive attention, but the plotting and the getting down of the words on the page were so much breezier than my usual tortured process. Perhaps because I had lived with the concept and the vision for this book since before we sold Teen Frankenstein, perhaps because I was hopped up on pregnancy hormones racing against my due date--I'll never know--but a true joy. I wrote the book in about 7 weeks.

The book contains an author's note about sexual assault, a key element of the story, so I'd like to point readers to great works that tackle the same subject matter: The Female of the Species by Mindy McGinnis and All The Rage by Courtney Summers

I just turned in the first draft of the third book in the High School Horror series, Teen Phantom, which follows a character from TEEN HYDE, Lena. I'm expecting an edit letter back any day, but until then I'm working on a spec pilot and a new standalone book proposal that I'm very, very excited about. High school meets classic horror in this YA contemporary twist on Robert Louis Stevenson's The Strange Case of Dr. Jekyll and Mr. Hyde.

Head Cheerleader Cassidy Hyde’s life should have been perfect. But it really, really wasn’t, and she’s about ready to give up and disappear. Until the first time she takes Sunshine. This new experimental drug makes Cassidy feel like the perfect, golden girl once again. A little memory loss seems like a small price to pay to get her life back . . . at least until boys start to go missing . . . boys that Cassidy NEVER wanted to think of again . . .

Chandler Baker got her start ghostwriting novels for teens and tweens, including installments in a book series that has sold more than 1 million copies. She grew up in Florida, went to college at the University of Pennsylvania and studied law at the University of Texas. She now lives in Austin with her husband. Although she loves spinning tales with a touch of horror, she is a much bigger scaredy-cat than her stories would lead you to believe.

Have you had a chance to read TEEN HYDE yet? Have you had book that was breezy to write? Have you included a minor character in a book with the intention of writing a later book using them as the main character? Share your thoughts about the interview in the comments!