Alexandra Bracken, author of WAYFARER, on knowing the heart of a project

WAYFARER is the second book in the Passenger series, and we're delighted to have Alexandra Bracken stop by to give us the scoop about it. 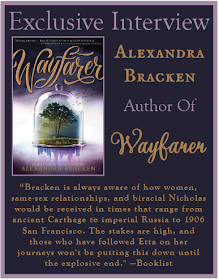 Alexandra, what scene was really hard for you to write and why, and is that the one of which you are most proud? Or is there another scene you particularly love?

You know... this was one of those books that didn't come easy at all. Some books pour out of you in a rush of excitement and love, others make you really work for it, you know? There was a ton to juggle between the time travel rules, the different characters, the subplots, the twists, etc! Actually, Etta's character arc really gave me trouble in the first few drafts. It took me months to see how her story was intertwined with her mother's and how it could serve as a foil for it. Once that clicked, it was such an AH-HAH moment for the rest of the book!

My favorite scene is probably the one with the Belladonna. I really wanted to find a way to include her character in Passenger, but there was already so much going on that I didn't want to keep overwhelming everyone. She's got my dream job: tracking down artifacts and valuables that have been lost to time and need to stay lost in order to keep Ironwood's timeline in place. I really loved the idea of someone auctioning these incredible items off, but how do you put a price on invaluable treasures? (Answer: you don't. You have people bid with secrets and information you can use to keep your position of power within the time traveling families!)

I'm also so happy with the ending of the book, but SPOILERS! :)

Oh man, this book taught me that I need to know what the heart of a project is before I start writing a single word. I'm not talking about the theme so much as the emotional arc of the book. If that's not in place, I have to really struggle to engage with story and characters.

My road to publication was pretty typical, to be honest! The only atypical thing is that I sold my debut (Brightly Woven) my senior year of college. Before that, I had only written one fantasy YA novel that--thank goodness!!!--will never see the light of day. I think every single kidlit agent rejected that project!

But that's not to say I don't have other drawer manuscripts that came after my debut. In fact, I felt lost about what to write next after Brightly Woven and had several misfires. One completed manuscript will live like a vampire on my hardrive--forever, and feeding on memory space. But one actually did sell almost five years later. So don't be afraid to go back and revisit those projects. Time is a great sidekick when it comes to beating old manuscript blues. Sometimes a project really just needs to bake a little longer in order for you to figure out why it's not working.

I finally had the idea for The Darkest Minds a full year after Brightly Woven was on the shelves and since then I've been publishing a book a year. At that point I was working in publishing full time, first as an editorial assistant and then in marketing, and needed a project I could really fall in love with to escape some of my homesickness. The rest, as ye olde cliche says, is history.

My writing ritual has changed so much over the years! While I was in college, I would squeeze in writing time between classes and wake up at the crack of dawn to revise (my breakfast for five months was a bottle of Coca-Cola and a snack size bag of Cheez-Its). One thing I learned when I first started writing seriously is that I really like working in long, uninterrupted blocks. I'm talking like four, five, six, seven straight hours.

After I graduated, I didn't really have a choice when it came to my writing schedule. I needed to be at my day job until six or seven o'clock at night, and I was usually too exhausted to sit down and write my own words after working on other books throughout the day. (When I was an editorial assistant I did most of my reading and editing at home and on weekends, which is one of the reasons I ultimately switched to marketing--the hours are a bit more predictable.) So the weekends became my prime writing time. I would leave the office on Friday, pick up some Chipotle for dinner, buy a bottle of Mountain Dew (I know, I know, but I didn't like coffee at that point! As Honey Boo Boo said, it's my Go Go Juice... though I swear I'm trying to kick the habit, except in Go Go emergencies!), and then write from the time I got home until three or four o'clock in the morning. Then I'd go to sleep, work all day Saturday until, you guessed it, three or four, and work through Sunday. I wrote the entire Darkest Minds trilogy, two novellas, and my upcoming Middle Grade project on this schedule, so somehow that worked for me!

Now that I write full time and have a dog that forces me to be a responsible human and not a mole person, I try to keep regular work hours and go to bed before midnight. Occasionally, on deadline, I fall back into my old pattern of staying up until the crack of dawn and sleeping in... it really is a curse to have your peak productivity hours be between midnight and four o'clock!

When I lived in New York City I would rotate between the four Starbucks locations within walking distance of my apartment (seriously) so I'd have some human interaction. Now I mostly work at home in my little office and talk to my dog and check in with writer friends throughout the day.

(I also now alternate between tea and coffee, but sometimes a girl just wants her Go Go Juice, okay?)

This might seem very obvious, but a lot of manuscripts are never completed because writers are so hard on themselves or let their attention wander when the story feels hard, or they feel disconnected from it. It's so important to keep reminding yourself that your first drafts are really draft zeroes: it's you telling the story to yourself. No one expects you to publish your first draft! Books are made in the revision process, so even if something isn't working now, it's not necessarily a reason to give up on yourself or a project.

A few things, actually! I'm working on a few different proposals on the YA side (one of which I think Darkest Minds fans will be REALLY happy with!) and finishing up revisions on my new middle grade project, The Dreadful Tale of Prosper Redding. It's the story of the youngest son of a Kennedyesque family who discovers the reason for his family's wealth and prominence in the world is a deal they made with a malevolent spirit back in the 17th century. It's my love letter to all of the Disney Channel Original Halloween movies I grew up with. :) All Etta Spencer wanted was to make her violin debut when she was thrust into a treacherous world where the struggle for power could alter history. After losing the one thing that would have allowed her to protect the Timeline, and the one person worth fighting for, Etta awakens alone in an unknown place and time, exposed to the threat of the two groups who would rather see her dead than succeed. When help arrives, it comes from the last person Etta ever expected—Julian Ironwood, the Grand Master’s heir who has long been presumed dead, and whose dangerous alliance with a man from Etta’s past could put them both at risk.

Meanwhile, Nicholas and Sophia are racing through time in order to locate Etta and the missing astrolabe with Ironwood travelers hot on their trail. They cross paths with a mercenary-for-hire, a cheeky girl named Li Min who quickly develops a flirtation with Sophia. But as the three of them attempt to evade their pursuers, Nicholas soon realizes that one of his companions may have ulterior motives.

As Etta and Nicholas fight to make their way back to one another, from Imperial Russia to the Vatican catacombs, time is rapidly shifting and changing into something unrecognizable… and might just run out on both of them.

Alexandra Bracken was born and raised in Arizona. The daughter of a Star Wars collector, she grew up going to an endless string of Star Wars conventions and toy fairs, which helped spark her imagination and a deep love of reading. After graduating high school, she attended The College of William & Mary in Virginia, where she double majored in English and History. She sold her first book, Brightly Woven, as a senior in college, and later moved to New York City to work in children's book publishing, first as an editorial assistant, then in marketing. After six years, she took the plunge and decided to write full time. She now lives in Arizona with her tiny pup, Tennyson, in a house that's constantly overflowing with books.

Alex is a #1 New York Times bestselling and USA TODAY bestselling author. Her work is available across the world in over 15 languages.

Have you had a chance to read WAYFARER yet? Does time help you beat old manuscript blues? Do you have a particular Go Go Juice to keep you going? Share your thoughts about the interview in the comments!