Melinda Braun, author of AVALANCHE, on writing in long hand

We're thrilled to have Melinda Braun stop by to tell us more about her latest novel AVALANCHE. 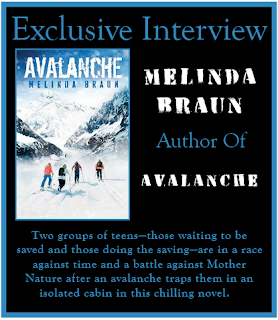 Melinda, what scene was really hard for you to write and why, and is that the one of which you are most proud? Or is there another scene you particularly love?

I think the hardest scene for me to write was the actual avalanche. Trying to describe it, not just what it looks like, but what it might feel like to be in one, was difficult. I have never been in an avalanche - I NEVER want to be in an avalanche. Being buried alive is definitely in my top three worst fears so writing that scene almost made me sick! While I have done my share of downhill skiing, I have never done that type of back country mountain skiing so I was fortunate to know some people who have. One of my friends even survived this type of avalanche (thanks to her airbag she was wearing at the time, which is an inflatable device that you deploy if you find yourself going under). She told me she would not have survived without it.

While that scene was the most terrifying to write, some of my favorite scenes are from the perspective of the mountain lion. When I first started the book, I had no idea those perspectives were going to show up, but now I love them. I also like how the ending turned out. I was stuck for awhile on how the story should end. It was bugging me because I usually know my beginnings and endings. It's the stuff in the middle that's the hard part!

I don't have a very serious ritual for writing, but I do like to write long hand drafts first, then type up the pages. I'm a doodler by nature so putting a pen to paper is very natural to me. I like to write at a card table set up in the basement laundry room. Glamorous, huh? I have also been known to go to coffee shops (mainly when I'm working on a revision). I also love listening to music, but I have to be careful what I'm listening to. Music has a way of infecting my feelings and that always shows up on the page.

It's a YA novel set in the early nineties, which coincidentally is when I was in high school. No cellphones. No Internet. A lot of grunge going on as Nirvana was huge. We all dressed like lumberjacks with our jeans and plaid flannels. It's called Seven Rivers and was inspired by the small town I grew up in, and while in some respects it's a coming of age story, there is also a murder mystery going on as well as some seriously creepy supernatural stuff. Think, My So Called Life meets American Gods meets Stephen King. Needless to say, I'm really excited about it!

Two groups of teens—those waiting to be saved and those doing the saving—are in a race against time and a battle against Mother Nature after an avalanche traps them in an isolated cabin in this chilling novel.

“I promise it’ll be a weekend you’ll never forget.”

A trip like that is exactly what Matt was hoping for—a fun adventure. A daring escape. A once-in-a-lifetime opportunity to go cross country skiing in a thrilling but dangerous pass through the Rocky Mountains. The perfect way for Matt to forget about his disappointing father and maybe let loose a little with his best friend and a group of carefree adrenaline junkies.

But then their guide takes them off-path … and straight into an avalanche. By the time they make it safely into an abandoned cabin, one skier is dead and another severely injured. Trapped with no heat, no water, and no radio the group decides to wait it out. Help will come. It has to.

Until it doesn’t. And Matt knows if they wait any longer they’ll be dead—just another bunch of victims in Mother Nature’s twisted games. Armed with only a handful of supplies and his fierce determination Matt decides to goes head-to-head with the elements, battling hypothermia, frostbite, and even mountain lions in order to find help and save them all. That is if Mother Nature doesn’t kill him first.

Melinda Braun grew up in Wisconsin and received her Bachelor’s degrees in Psychology and English from the University of Minnesota. Currently, she lives in the Twin Cities with her husband and daughter. Although she loves hiking and camping, she does not enjoy portaging canoes. Stranded is her first novel.

Have you had a chance to read AVALANCHE yet? Have you written from the perspective of an animal? Do you write your drafts in long hand? Share your thoughts about the interview in the comments!