Una LaMarche, author of YOU IN FIVE ACTS, on feeling like you will die trying to write a book

We're thrilled to have Una LaMarche stop by to tell us more about her latest novel YOU IN FIVE ACTS. 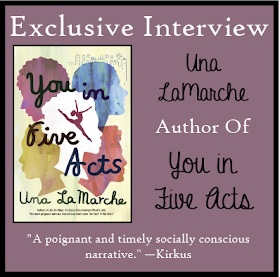 Una, what was your inspiration for writing YOU IN FIVE ACTS?

I love the movie Fame. I’ve always wanted to have some incredible performing arts talent like dancing, singing, or acting, and growing up in New York City I loved going to Lincoln Center to sit on the fountain and look up at those buildings—it felt and still feels to me like the most promising, intimidating place in the world. So a book about a bunch of talented kids vying for the spotlight, hanging out at Lincoln Center was kind of a personal wish fulfillment, to be honest.

The hardest scene for me to write is at the very end—it’s not really a spoiler to say that one of the characters dies, because all of the characters are alluding to a tragic event throughout the book. Still, I’ve never killed off a character before, and it was brutal. You have to feel for your characters to write them well, but I straight up loved this character. I actually wept.

Bunheads by Sophie Flack—she’s a real professional ballerina who danced with the New York City Ballet, and was also kind and wonderful enough to be my ballet fact-checker for You in Five Acts! Also Tiny Pretty Things, and the follow-up, Shiny Broken Pieces by Sona Charaipotra and Dhonielle Clayton. They are so well written, and deliciously addictive.

How long did you work on YOU IN FIVE ACTS?

I worked on an outline for a few months, but the actual writing took about 8 months for three drafts. I usually write the first draft in about three months—I would take a lot longer, if not for the deadlines imposed by my (generous, amazing) editor, Jessica Almon, at Razorbill.

This is my fifth book and fourth YA novel, but it taught me (yet again) that no matter how many books you’ve written, whether it’s 0 or 500, when you start you will feel like writing a book is impossible and you will die trying.

I think this was my hardest book to write. I had to do a lot of research into a world I knew almost nothing about, I had to tell the story in five voices, and I had to kill someone. I ate a lot of donuts during the writing of this book; donuts are my anxiety food. But the good news is that You in Five Acts taught me that I am still capable of writing a book and not dying, and also that I can eat approximately 12 mini donuts before I start to feel sick. So there were a lot of invaluable lessons.

What do you hope readers will take away from YOU IN FIVE ACTS?

I hope readers will take away the importance of perspective. I don’t just mean how you see events unfolding—although there is that. The characters are all looking back on a time that felt pivotal in their lives, and noticing what they could have done differently to keep things from going off the rails. But on another level, these characters all have different levels of privilege, and perspective on that privilege, based on where they come from, who their parents are, and what they look like. Joy, the main protagonist, is a young black ballerina coming up in the starkly white world of dance. She has to work so much harder, and she knows it. A lot of people who don’t have to work hard don’t have any perspective. Look at Donald Trump (dry heave). He thinks a million-dollar loan is nothing. He has no clue. OK, gross, let me stop talking about Trump. I also hope people cry at the end of the book. Is that mean?

I had an easier road to publication than feels cool to admit. I sold my first book, Five Summers, in 2012 before I had even written the entire thing (in my defense, I did end up writing it while also caring full-time for an infant, so it wasn’t that easy). I have since written three other YA novels—Like No Other and Don’t Fail Me Now, in addition to You in Five Acts—and one comic essay collection, Unabrow. I haven’t written any full manuscripts that haven’t been published, but I have plenty of short stories, unfinished essays, and terrible poems lying around.

Hahahahaha, no. Even after writing four I don’t feel like I have a key, only a locked door to bang my head against in shame while binge-eating donuts. I guess I could say that writing a solid outline with all of the plot points and narrative arcs, and then sticking to a daily writing schedule, is key—but every writer works differently, and I firmly believe everyone should work in a way that makes sense to them. I’ve met writers who write the end of the book first and work backwards, or who write every line of dialogue and then go back and fill in the narration. Writing is personal, and people are weird. Do what feels right.

I mostly write at home, either at my dining room table, or in bed, although I sometimes go to coffee shops if I’m getting too distracted by the Internet, or my horrifying pile of unwashed dishes. I can’t listen to music while I work—I need relative silence (city noise, which I have learned to block out after three decades in New York, counts as silence). I don’t write every day. Days off are important, and it’s not like I’ll forget how to write. (Hahaha. That’s what I tell myself. Then I start a new book and I totally forget how to write.)

If you’re unpublished, don’t give up. Keep writing, keep polishing, and find readers who will give you deep, honest feedback. Don’t self publish just because you don’t find an agent in the first two weeks of trying. This all takes time. Keep going.

If you are published, don’t tell unpublished writers what to do; it sounds condescending. (See above paragraph.) OK, fine, you can give kind and well-meaning advice. But definitely do not tweet how upset you are that you have recently fallen to #5 on the NYT Bestseller list. Everyone will hate you.

I’m working on a proposal for a second essay collection, and ideas for my next YA. I’m also writing a TV pitch with a friend of mine, about modern parenthood. It may never become anything, but it’s been so fun to write that I don’t even care. That’s the sweet spot—when you’re really enjoying the process. When you’re willing to put something you write out into the world without knowing, or fearing, what will come back to you.

In the high-pressure months leading up to the performance that will determine their futures, a group of friends at a performing arts school look back on when an unexpected event upended everything. The moment that changed their relationships, their friendships, and their lives forever.

At a prestigious New York City performing arts school, five friends connect over one dream of stardom. But for Joy, Diego, Liv, Ethan and Dave, that dream falters under the pressure of second-semester, Senior year. Ambitions shift and change, new emotions rush to the surface, and a sense of urgency pulses between them: Their time together is running out.

Diego hopes to get out of the friend zone. Liv wants to escape, losing herself in fantasies of the new guy. Ethan conspires to turn his muse into his girlfriend. Dave pines for the drama queen. And if Joy doesn’t open her eyes, she could lose the love that’s been in front of her all along. 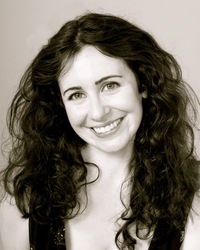 Una LaMarche is a writer and amateur Melrose Place historian who lives in Brooklyn, New York with her husband, her son, and her hoard of vintage Sassy magazines. Una used to be a fancy magazine and newspaper editor before she had a baby and started writing from home, sometimes pantsless, for a living. Her first novel, Five Summers, is being released from Razorbill in May, and she’s currently in development on a second. She also writes for The New York Observer (of which she is a former managing editor), The Huffington Post, Vegas Seven, NickMom, and Aiming Low. Una continues to blog at The Sassy Curmudgeon, which she started in 2006 as a way to bring shame to her family. You can find her on Twitter under the handle @sassycurmudgeon. (If she’s not there, she’s probably trolling the internet for celebrity blind items or bulk candy.)

Have you had a chance to read YOU IN FIVE ACTS yet? Have you written a book as kind of a personal wish fulfillment? Have you found the sweet spot - where you enjoy the process without fearing what will come back to you? Share your thoughts about the interview in the comments!